well that was fun while it lasted... 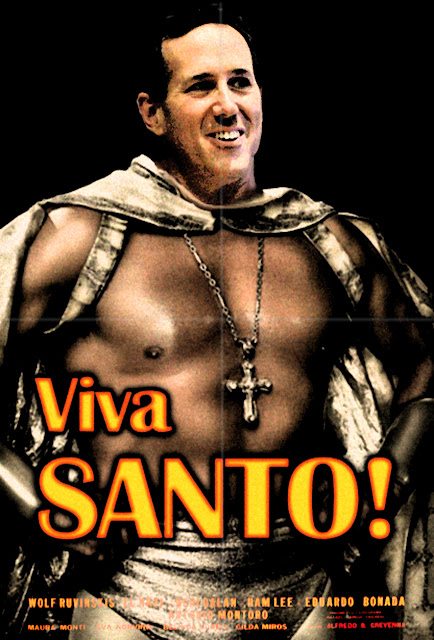 i suppose i knew that this was going to happen, but it does seem like every time i get to like a television show, it either jumps the shark [an expression that always sounds like something you dare a drunk teenaged boy to do] or gets canceled. and so it is with "the republicans".

to be honest, since they moved the show away from the "debate" format and started getting rid of some of the more entertaining characters, it's gotten a little stale. i mean, i know that you always need the central character to be a sort of "straight man" so that the audience can identify, but the character of stiff rich guy mitt just doesn't seem that human.

i originally didn't see much of a future for the uptight, repressed rick santorum character, because he was just so outrageous, ill-informed and objectionable that, even in the beginning-of-season crowd, it seemed impossible that he could get taken seriously. but the writers really brought him to life after that first big shindig in iowa and compared to robo-romney, a man who once compared homosexuality to bestiality seemed like the genuine one.

far from seeming unbelievable, santo almost got a little too real, telegraphing one of my all-time favourite bits from mel brooks...

... you know what, rick? i believe you. i once told dom "don't get your knickers in a knot", which was how i found out that that expression is not widely known in french canada and sounds a lot like something else when you don't enunciate properly. it's just that when i stumble like that, dom takes my vodka smoothies away and tells me to get some sleep. when you stumble like that, people think you're playing to your audience. which should tell you something about what we think of your audience.

yes, things are over for santo, which basically ruins the whole "republicans" show, because the gingrich character just didn't turn out to be as interesting and funny as he looked at first. but the fact is, mitt romney and the republican campaign of 2012 has been marked by santorum and that mark cannot simply be wiped away.

the entire story has become about romney's lack of appeal with "real" republicans compared to santo's. and "real" republicans are apparently those who appreciate a good ni-joke. although they might try to hide it by nominating the guy who looks like he rolled off an assembly line he then shut down and moved to india, you've made a stand for the core of the republican party: people who fear homosexuals, the educated, women [or at least their womanly parts], muslims, union workers, hispanics and the poor.

so bravo, santo, as you ride off into the distance. thanks to your candidacy, we all know a little bit more about who the republicans really are.