April 26, 2012
the gods of colour, also known as pantone, have proclaimed something called "tangerine tango" to be the colour of 2012. so the next time that someone says they don't like orange, you can scrunch up your nose and comment quietly on how utterly unfashionable they are. until next year, at least, when i'm holding out that "party hardy puce" is selected.

of course, for most of the world, life goes on in a whole range of colours without any consciousness of how "with it" we are. but don't worry, because cosmetic companies have your back and are coming up with ways for you to stay up on your hip quotient by offering a trend-conscious colour palette. sephora actually launched a whole tangerine tango-themed set [which looks kind of yummy]. but i think the shade that my personal favourite interpretation is from chanel's spring collection: the sparkling orange "tiger lily".

i'm thrilled that much of chanel's spring collection is being added to their permanent line, since it seems to be a very lovely, wearable mix of shades in general. i'm saddened to have snoozed and lost on their spring blush, but i was quick to jump on "tiger lily", which is- i believe- the only other limited piece. i have, however, been embarrassingly slow to review it, but since it still shows as being available from most major retailers [it likely isn't on counters anymore, but you can ask if they still have it] and it's still up on chanel.com.

"tiger lily" is a fairly good description. i used to live in a house with a tiger lily plant in the back yard that threatened to overwhelm our garage despite being deprived of most natural light by a crossroads of shadows. its flowers were roughly the medium-light, yellow-tinged orange of this shadow. i have to admit, though, the combination of the base colour with a healthy dose of white sparkle reminds me most of a brunch mimosa- juicy orange with bubbles inside that catch the light. it's possible that i can relate all things to booze.

texture-wise, "tiger lily" reminds me a lot of the gorgeous chanel shadow "beige lamé", which came out with their holiday collection. it's very soft and pigmented, and the sparkle inside, while not over-the-top glittery, definitely adds an eye-catching lustre to the shade. it's a bright, lively, perfect spring/ summer colour that i think will work on most complexions [since it deposits enough pigment to show against darker skin] and any eye colour. ok, i'll admit, i'm particularly fond of orange shadows with blue eyes, because the contrast between the two makes the rest of my face look brighter, livelier and my eyes themselves tend to look more awake.

COMPARISONS AND IN-USE PHOTOS AFTER THE BREAK...

because i do have such a love for orange shades, i thought there was a good chance i had something similar, but all the shades i tried were actually quite far off.

"fresh daily" from mac's recently released "call me bubbles" quad is deeper and redder. "style predator" [from the "fabulous felines" collection] is a lot darker and browner. "straw harvest" [another limited mac shade, from the "spring colour forecast" collection in 2010] was the one that looked closest in the pan, but it's noticeably lighter and has a soft gold sheen that makes it appear lighter still. of the permanent oranges in my collection [so to speak], the closest was mac's "motif"- a golden peach with bright pink sheen- which i didn't include in the photo because it's actually even further off than those shown [much lighter, plus the pink reflect makes it look totally different]. i have heard that "tiger lily" is similar to the discontinued mac shade "juiced", which may be true, but just goes to emphasise the fact that even the closest comparisons are long gone.

although released for spring, orange is a perfect summer colour to my mind and i can imagine that it'll be making frequent appearances on lids throughout the world even as the weather gets nicer. i know it's already seen heavy rotation on mine.

grab this flower while you still can! 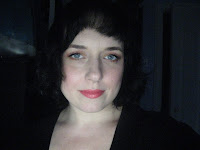 as i said, i've had this kicking around for a while, but reviewing it kept getting pushed back. how long have i had it? well, here's the first look i did with it, where you can clearly see i have black hair. there are other, more recent looks i could have posted [there are some you already have -ed.], but the truth is, i was really happy at how "tiger lily" contrasted with the brighter oranges here. 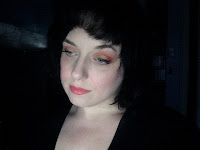 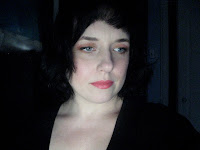