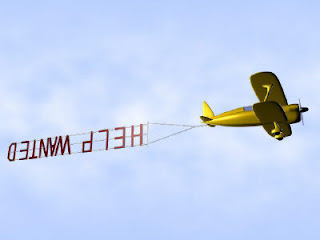 thanks to martin rouge for forwarding this one to me:

Hi, I want to write a book but I dont have the patience nor am I terribly detail oriented. I need someone who can take my idea/s and make them come to life on paper. My wish is to make this into a book or play or screenplay. Its a kind of steamy story, so I want a writer that can bring out every emotion when reading this. I want to collaborate with the writer, I dont have funds right now, but we will bound by a contract and split everything if it gets to market, or we can discuss it further. Look forward to hearing from you.


i keep rereading this, trying to decide how best to reply. of course, i'm probably not going to reply at all, but i do think that this person deserves a reply and this is more or less how i think it should read:

i'm assuming you're a guy, because i can't really imagine a woman saying that she didn't have the patience to write out an idea that seemed important to her. you don't have the patience? seriously? i suggest that you see a professional about this impatience of yours because, honestly, it sounds like it might present a bit of a problem in your life.

now, moving on to the attention to detail. the grammar and spelling errors in your brief craigslist post make it obvious that detail isn't a big thing for you, but good on ya for admitting it up front. you know which people are really detail-oriented? almost no one. being detail-oriented can come naturally to some, but for most of us, it's something we're forced into by circumstance. it sounds like circumstances haven't gotten to you yet. that's awesome for you. but i suspect that at some point, being conscientious about details is going to prove important in your life and you'll acquire the skill in a hell of a hurry. perhaps you should consider getting a jump on things.

as far as the rest of us are concerned, attention to detail is often directly proportional to our interest in a project and the pressure we're under to get it right. i make spelling mistakes on this blog all the time, because it's my personal thing. when someone is paying me money and my livelihood depends on it, i'm a little more careful about giving it that second read-through. such is life.

which leads me to this whole money situation thing. you don't have any. what exactly is my incentive to work on this, given that you obviously can't pay me? some vague deal that we'll work out "if it gets to market"? what market? do you have contacts? have you spoken to anyone? did you know that professionals are often able to generate interest in a project before having a manuscript ready when the idea is that good? hell, you don't even seem to know what form the idea should take. having something published as a book is very different than having it produced as a play is very different than making a movie. it doesn't sound like you've put much thought into this idea at all.

and for that matter, if i'm writing the story, investing it with all the emotions and have to play a major role in marketing it to the publishers, theatre companies and film studios you obviously don't know, what do i need you for anyway? you know what they call people who write stories based on ideas they hear from other people? authors. playwrights. screenwriters. that's right. the most famous writers in the world were usually just really good at retelling stories they'd heard from someone else- often stories that were handed down through generations.

shakespeare? never wrote an original libretto in his life. akira kurosawa made "ran", one of the most beautiful films in history, which is a retelling of shakespeare retelling a story that he'd heard from other people.

which basically makes you the anonymous chump who didn't have the talent [or the patience, or the attention to detail] to write it for himself. is that how you want to go down [or not go down] in history?

you might think i'm being cruel. well, maybe you have a point. you wouldn't be the first person to think that about me. but here's the thing: if you have a really great idea, if it's something that you can see on stage or on film or on the printed page, you need to run with that. if the idea is strong enough, you'll find it in you to write it, because having that creative spark means having the passion to see the project through. if you can't find it in yourself to feel motivated to finish it, then i'd warrant what you have is a product. perhaps it's saleable, but if it is, you should be able to demonstrate that by generating some interest from  potential distributors/ producers/ publishers. if you can't contribute either of these things, what you're contributing is background noise. useless static that goes nowhere until it's channeled through a real artist, who will have no use for you. sorry dude, but that's it. i have a dozen wonderful ideas a day in how to fix the sorry roads of montreal, but i don't make money from any of them because i don't have the foggiest notion of how to make them into something real.

do yourself a favour. sit down and try to write what you have in your brain. just write the whole idea out, without trying to fit it in a specific format. if you can't even do that much, then i think you need to ask yourself how incredible the idea is in the first place. if you can, then i think you might discover that you're able to do a lot more of this by yourself than you might have originally believed.