April 13, 2012
having spent the majority of my life with black cats and living with someone born on friday the 13th, i have to tell you that i think the whole bad luck thing might just be a crock. similarly, i've always felt that whatever good luck might come your way from finding a lucky penny would likely be balanced out by the bad luck of having to get a round of shots to combat whatever diseases you contracted from grabbing something you found on the city street. i did, no word of a lie, once have a wish come true when i wished upon a star, but i've never had the experience repeated and in retrospect, i think i might have accidentally wished on an airplane.

besides, there are so many things making my friday favourites this week, how could i think it was bad? here goes...


everyone knows what celebrities share their birthdate, but who among the fictional is your birthday twin?

relax, america, barack obama doesn't want to kill your children. unless you're bill and hilary clinton. then you're pretty much screwed. brought to you by an employee of the exact network you think it is.

canada: fidel castro would like to have a word with you.

the only thing that would make henry rollins cooler is if you got a bunch of japanese kids to draw him. taa-daa!

i'll bet you think big boobs are a blessing. think again. [thanks to dom for this one!]

have you ever tried to prep a microsoft word document for online publishing? tom scocca has.

and in case you've missed the internet sensation that is henri, here he is. he's sort of the flipside of lolcats. and he's french. [thanks to lisa s!]


if you're in montreal... acclaimed sound artist freida abtan has collaborated with a group of artists to produce the multimedia performance "fear of flight", one night only on april 19th at concordia university. the performance is currently reserved to capacity, but it's worth checking back to see if you might be able to get in at the last minute. details on facebook.

the montreal spca, 7314 mountain sights [namur metro] will be having a cat adoption drive on april 20, 21 and 22. contact them through their facebook page for hours and details. $75 gets you a beautiful feline companion who's spayed, vaccinated and dewormed and you get a bag of royal canin cat food [which normally retails for over $20]. plus your money goes to helping more animals who need it. i can't adopt all the cats, people!

if you're in seminole county florida... take some eggs out of the fridge and give them a few days to get really scary, because koran-burning pastor and media whore terry jones is planning a rally in support of george zimmerman on april 21st at the county courthouse. zimmerman deserves a fair trial. this prick deserves everything you can throw at him and it would be nice to show that the people who oppose his sort of grandstanding far outnumber those who support it.

if you're pretty much anywhere... cinched tight corsets is having an awesome fundraiser this weekend to help fund their participation in fashion arts toronto. if you donate between 6 p.m. on friday april 13th [today!] and midnight on sunday, april 15th, you'll immediately be eligible for the prize of a corset valued at $300, to be awarded when they reach $500 in donations. i can personally attest to the quality of their garments, which is exquisite. you won't find greater attention to detail or more unique pieces anywhere. check their web site for some drool-worthy images. you can make a donation on their indie-gogo page. good luck!


i have to say that every spring, as the mercury rises, my fancy always turns to muslimgauze. i don't understand why, but it's been the case for many a year. in particular, there's something about the album "betrayal" that fits perfectly with the idea of the dormant earth being pulled from its slumber. here's a taste:


in case you missed it, my wee book of short stories, "interference" was released as an ebook this week! many thanks to those who have already purchased it and, for those of you who haven't, it's only $3.99, so you really don't have much to lose. the book can be purchased in real and imaginary formats here.

also, you may have noticed that i've added a "donation" button at the top of the page. you are, of course, free to read through the contents of this blog for free, but if you can find it in your heart to support a struggling writer/ film-maker/ artist/ cat owner/ makeup addict in her attempts to bring a little entertainment into your life, that is always appreciated. i'll actually be using funds strictly for funding the publishing and marketing of a new book and for securing distribution for "conversion", the feature film that dominic and i made, which we would really like you to be able to see. i might buy some cat treats with the leftovers.

and, as promised, the second edition of more like space radio will be up within the next two to three days. feel free to email me with any requests: info [at] fsquaredmedia [dot] net. you can still download episode one here.


i'm happy to announce that yesterday was arthur's 14th birthday. what makes me particularly happy about this is that last summer, neither dom nor i foresaw him making it to this milestone. he was sick, he was sleeping all the time, he couldn't move very well, he'd neglected his personal grooming and he wasn't socialising with the other cats. he shed a lot of weight, going from slightly heavier than average to skin and bones in a shockingly short period of time.

we sought help from our veterinarian, who determined that he had diabetes, but months of insulin injections plus a new diet didn't seem to affect his physical health at all. as much as it pained us, we had to consider that his quality of life was virtually non-existent.

and then, a miracle. i'm not a person of faith, but i really don't know how else to describe it. practically overnight arthur showed a dramatic improvement. it started with becoming social with his siblings and with us. he moved around the place more. then, he started to shed his dead, matted fur and take better care of himself. and he started to put on weight.

now, he's alert and perky and social- possibly more so than he's ever been. he's regained his imperious attitude and thinks nothing of showing the young ones the palm of his enormous snowshoe-like paw if they get out of line. that said, he's also happy to share some nap space with them.

just after midnight on his birthday, he suddenly started talking, or singing, since that better describes the sort of sounds he makes. and the whole day, he was perfectly convinced that he should be the centre of attention at all times, right down to the hour he decided he wanted his special "birthday dinner" served. [yes, we got special food for his dinner to share with his brothers and sisters.] he also got great, great enjoyment out of the catnip toy he received. he's always been kind of a hop-head.

so here is arthur, as he appears today, regal, beautiful and, most important, the portrait of feline health. happy birthday! hail to the king! 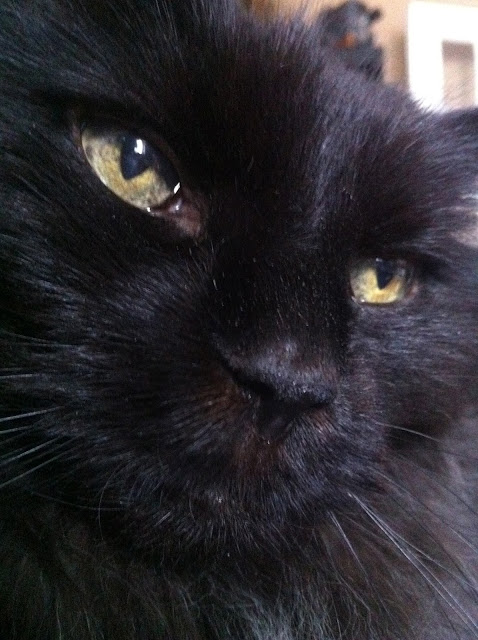 thanks very much to all who've read this and who've supported me in various ways- you have no idea how much it means.