March 30, 2012
well now that i've prosthelytized to all of you about favourites for the spring season, i thought it was only fair to show you that i do put my proverbial money where my mouth is- and where the rest of my face is as well. after all, the photos i've shown might have clearly illustrated that i was wearing the shades i recommended on my nails, but i thought that it would be nice to share a couple of other looks in the spirit of the new season.

of course, no one's saying that you have to spend the next three months wearing neutral pink lips, shell-toned cheeks and green eye shadow, in fact, it would probably be boring if you did. [even my friend kathleen, who is a green freak in every sense of the word, except the one that would mean she were an actual green monster, which she isn't, doesn't wear green all the time.] but i do find that these are a nice option for the time of year and still give a certain level of variety. 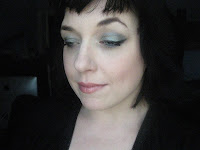 this first one was obviously done a while back, because you can see i still had my black hair. i like the fact that it's a cooler-toned green look, which is a little less common. i like combining "periwinkle cardinal" with the bluish-silver shade from hourglass "prism", because of the chilly "foggy" effect it gives. since both shades are quite shimmery, a little goes a long way to create a day or night kind of look. 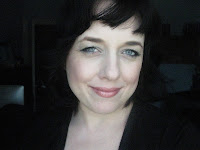 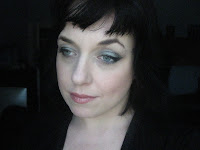 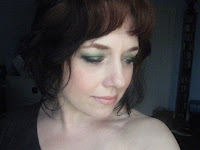 one thing i love trying, as i've mentioned before, is a smoky eye in different colours. i find it's a look that's can be more or less dramatic depending on the situation and the intensity of the colours used and greens do seem to lend themselves particularly well to the task. [oddly, a green smoky eye is about the only shade i didn't do in my original smoky eye post.] 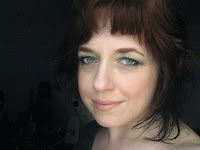 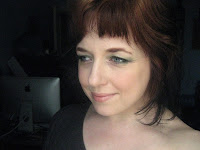 there are a number of techniques people use in doing this sort of look. i'm not sure which one is orthodox vs. progressive vs. ultra-orthodox and i don't want to spit on anyone's cosmetic religion, but i tend to alternate between them. what i've done here is what i consider the easiest- a gradient of colour with the darkest shades used close to the lash lines and gradually lightening from there. [obviously, i only used a couple of colours on the lower lids, since doing the full gradient would have left me with green down to my cheek bones.] the key to this look is a nice blending brush. a wonderful friend sent me one from tom ford that is my magic wand. i pat product on like an expressionist painter until there are splotches of colour everywhere i need. then i wave my magic wand over the area and *poof* everything looks smooth and seamless.

and hey, i finally figured i'd include close-up shots of my eyes. i've been a little hesitant to do this mostly because, up close, my application techniques do sometimes show their amateur quality, but if they help, let me know and i'll continue to include them in these posts. 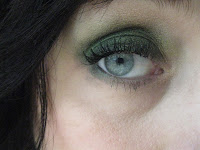 face ::
same as above 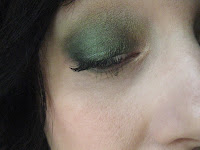 and in case you'd like to go back and look through my various spring recommendations, here you go: