March 06, 2012
even when you love playing around with colours like i do, there are probably some looks you choose to avoid. perhaps there are good reasons [there often are], or perhaps it's just a personal preference [no point wearing a colour you hate just to prove a point], but sometimes it's an adventure just to get out of your comfort zone and see what happens. that's a pretty good general rule, of course, not just for cosmetics, but perhaps you start with bright blue eye shadow and you end up betting your house on a high stakes poker game and performing strip karaoke with a group of pre-op transexuals you met at a 24-hr ihop. it's really up to you how far you let your taste for experimentation take you.

in my case, there are a couple of things that i rarely try, mostly because, having tried them, i've found they rarely work. that doesn't mean that i've given up, but it does mean that i'm more reticent to put these sorts of looks in regular rotation. one of the most difficult for me, not just in terms of pulling it off, but in that it's hard to resist trying, is a blue/ teal eye shadow look. when i see these colours, i'm immediately drawn in, but it's comparatively rare that i find something that looks quite so exquisite on my face as it does on my hand [which isn't a great place to wear makeup, no matter how pretty you think it is].

there are, of course, perfectly logical reasons why this sort of colour scheme won't work on me. chief among them is the fact that i have very pale blue eyes, so brighter shades of blue tend to make them look a little faded or washed out. i can generally do ok if i combine these shades with others, but if they dominate, the effect is often less than lovely.

but why the hell should that stop me? if i'm going to wind up the evening at that strip karaoke joint again, i need to kick things off somewhere.

so here's a look i put together using blue and turquoise shades for my eyes. [and yes, eagle-eyes, you might notice that my hair is black in these photos, which means that they were taken before i changed colour. but the fact is that this will probably continue to happen from time to time, since i have a cache of looks i haven't shared on here and might want to. and yes, i do write down what i wear most days, because one never knows what one might want to post at a later date, does one?] 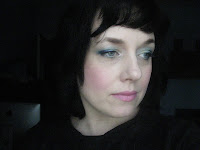 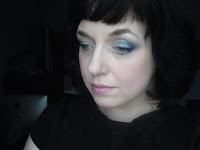 all in all, i wouldn't say that this looks as gnarly as i feared, but i'm not in love with it. i think that since i don't generally go for this sort of look, it seems somehow inappropriate. and of course, because it's a fairly bright look, which i haven't done in a long while, it seems sort of shocking.

and since i value honesty, i have to confess that i did not end up doing strip karaoke, playing high stakes poker, or even going to the ihop with this face on. i deliberately chose to try this on a day i knew i could stay at home, so only the cats got to see me. but i'm sure that when i do get up the nerve to leave my house looking atypical for me, i'll stumble into all sorts of outrageous adventures.

[fyi- if you're ever interested in browsing through past looks i've done with certain colours, i've added colour labels to any posts that have looks in them. alternately, feel free to send me some suggestions!]

Laura D.P. said…
well, it's not bad at all!! Of course there is not much contrast between the eyeshadow and your eyes, but it suits you! Today I've tried Hibiscus sheen supreme and I was a monster with that lipstick on.. a monster with bleached lips!! muahaha
5:23 PM

morelikespace said…
Thanks! I think that the eye makeup would look nicer against dark eyes to be honest, but I liked trying it out.

Sorry to hear about your bleached monster lips experience! Really pale lip colours can be tricky for anyone, I know...
6:40 PM

ahoythere said…
Actually, it looks really subtle and gorgeous! I think you may have just talked yourself into not trusting those colors, but from an outside perspective they are really very flattering. And the blush and lippie are perfect with the look......
If I were you I would dig into that grab bag of feared colors and see what else you can secretly pull off!
11:03 AM

morelikespace said…
Thanks ahoythere! I certainly want to try expanding my regular colour choices, but, of course, it's very easy to fall back on old favourites. I think that the next thing I try will be bronze lips, which is the other thing that's always felt tricky for me.
12:26 PM

anahdara said…
i think this look is really pretty on you...and not super-bright to my outside perspective...yes, not in keeping with the 'making your eyes pop' in the traditional way...but pretty all the same...
anyway, i envy how blues and icy pinks look with your colouring!!!
11:07 PM