March 09, 2012
well i guess it's no secret to readers of this blog that my favourite thing at the moment is having my computer back in perfect working order. part of me sort of wishes i'd just gone to the apple store and had them look at it to begin with, although i have to admit that there is something kind of gratifying about having my computer skills expanded so that i now know how to troubleshoot a lot of problems without having to contact an expert.

the other part of this experience that's strangely enjoyable is that i'm suddenly having to re-import a lot of music. see, i was bad and i didn't back things up as frequently as i should [despite the fact that apple provides a program for doing so and i have a huge external hard drive just begging to be filled with information- wait, does that last bit sound dirty?]. my attempt to back everything up last minute at home failed part way through, which means that i ended up doing a lot of backup, including things like my photos and music, hurriedly in the apple store. i did get everything but, when i saw the amount of music to transfer and realised how long it was going to take, it was evident that a decision had to be made. more to the point, a decision had to be made by me.

so i grabbed what i knew would be difficult to replace- still a great deal- and bid adieu to the rest. so now, i'm starting almost from scratch, stuffing my computer with all sorts of sounds. i would have thought that this would be irritating and tiring, but in fact it's a lot of fun. it's getting better organised and i'm listening to all sorts of things i haven't heard in a while. my thinking is that if i'm lacking anything i had before, but can't remember what it is, i'm probably not missing it that much. everything else can be replaced.

that said, i also have some more "traditional" friday favourites for y'all [as you can see, i'm already gearing up for the southern republican primaries on tuesday].


this is one reason why i suspect a lot of politicians are high all the time. try reading it out loud.

rather like the makers of a certain ship a century ago, washington d.c. basically stamped the word "unhackable" on their electronic voting terminals. and now they have a sociopathic, alcoholic robot as the head of their school board.

i seem to be the only person in the world who thinks that the new rules for potential g.o.p. candidates in south carolina are actually reasonable. after all, they're just asking you to practice what the party preaches and if you can't do that, maybe you should shut the hell up.


if you're in montreal... one of the city's remaining independent record stores and home of possibly the world's finest iced coffee [may not be available until spring], sound central [4486 coloniale] will be hosting a live, in-store performance by kill chicago and edmund lam on sunday afternoon. things get underway at 3:30 and go until six, so you don't need to worry about being up too late on a work night.

if you're in toronto... join in for the second "urban exploration walk" satuday afternoon [march 10th] at 1p.m. you can get details here. see some parts of the city that you normally wouldn't notice and challenge yourself to find some beauty in the decaying hulks of the south riverside neighbourhood.

if you're in new york... why not check out the "endless night vampire ball" happening on saturday night? sure, there are lots of goth nights to be had, but this one is an actual ball. as in it's formal for all who want to attend [dress code enforced]. the galleries page on their web site is currently under construction, but you can see photos on their facebook page if you need some inspiration. worth the price of admission just to watch the fashion show, in my opinion.

don't forget that if you have an event you'd like mentioned here- anywhere in the world or on the internet- you can always email me.


as you might have guessed, music has been on my mind a great deal in the last couple of days, but over the course of the week, what stuck in my brain the most was gary war. his catchy mix of bouncy rhythms, electronics that are both melodious and noisy and garbled vocals almost buried in this foamy mix is a great sort of pick me up. i was deeply disappointed to learn too late that he was performing last friday here in montreal, because i definitely would have posted it here and, of course, attended. damn.

anyway, here's a taste of what we all missed. check your local listings, since it seems like live dates are promoted pretty quietly.


i'd like to once again thank everybody who has been coming to the caustic lounge and those who turned out for the one year anniversary party. i hope to be doing this well into my eighties, although by that point the volume will likely be really loud.

many of you have probably heard that sponsors are leaving rush limbaugh's radio show in reaction to slut-gate. it's been rumoured that up to 40 [and still counting] paying partners have flown his revolting coop and that, of the 85 ads played on his show on thursday, 77 were unpaid public service announcements. in the wake of all this, some have started raising questions about the appropriateness of the obama super-pac accepting a million dollars from comedian bill maher, in light of comments he made about former vice presidential candidate sarah palin and congresswoman michele bachmann. you'll have to draw your own conclusions, because the white house isn't commenting. no word on whether or not any politicians have figured out how birth control works yet.

also thanks to all who commented on my post about trying out looks that had previously made me nervous. next up: bronze lips, something that always seems to look so lovely on other people... might have to wait until the summer for that one...

and here, to get your weekend started off on a beautiful note, is the beautiful arthur. he knows he is a majestic beast... 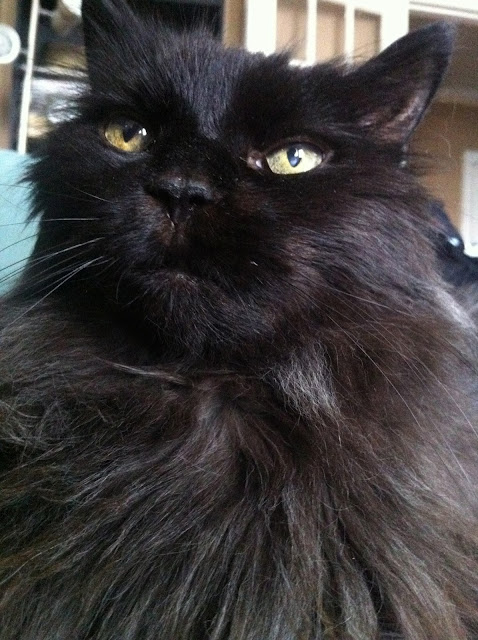 thanks for reading! if anyone's looking for me, i'll be loading music onto my computer for the next 48 hours straight.