the continuing adventures of el santo vs. mammon

i'd pretty much decided that last night was going to be a mundane affair, where the results would likely mirror the polls for the republican nomination campaign: gingrich would win alabama, romney would eke out a victory in mississippi, following the time-honoured canadian tradition of taking advantage of a split opposition vote. there hadn't really been any major hiccoughs to derail things. romney and gingrich parried over grits and polls showed us some other things about the south that confirmed most of our worst fears about that area of the world. [forget gay marriage, mississippians still struggle with the debate over interracial marriage.] although rick santorum had scored an outrageously skewed win in kansas over the weekend, the consensus was that his competitors gave that one to him, because they were busy fighting in the "real" battle along the gulf. things moved lazily, like a southern summer breeze and when wolf blitzer did his "in this race anything can happen" opening for the cnn primary coverage, even dom screwed up his face and answered "you always say that". [yeah, we've watched enough cnn that we talk to wolf right through the television scrceen.]

it honestly seemed like the southern primaries weren't really going to change a lot in terms of momentum. if romney won one state, he'd have a weak-kneed claim to being a viable candidate in the south [if you ignore the whole vote-splitting argument]. if newt won one and came close in the other, he might be able to breathe life once more into his increasingly moribund campaign. [even freddie and jason burnt out their appeal eventually.] santorum could certainly continue if he came a solid second in both states, although he really needed a win to maintain any sense of momentum. but basically the biggest thing that looked likely to happen would be that mitt romney, might start to begin the process of really locking down the nomination the way that ari fleischer insists he's been doing all along. 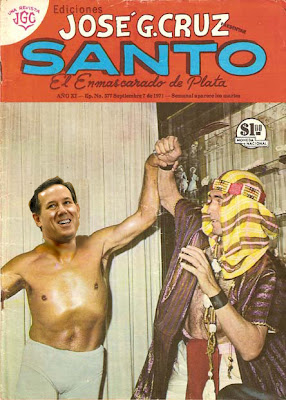 recent events have led me to believe that there is a concerted effort on behalf of the santorum campaign to either avoid answering polls altogether or to lie, even at exit polls when it theoretically doesn't matter. because it's not just that the campaign has put together a nice little pack of wins and strong performances. it's that the candidate has been consistently outperforming his poll numbers in virtually every race. polls in alabama had him running third, but from the moment the polls closed, he was ahead and remained there the entire night. sure, it was a pretty tough three-way race, but in the end, el santo bested gingrich by almost 30,000 votes. that's not exactly squeaking by.

in mississippi, of course, the vote was much closer. but the fact remained that santorum maintained a thin lead for the entire night [despite running third in pre-vote polls and still trailing romney in the exit polls]. once again, a flummoxed media had to admit he'd grabbed both states.

we all know that polls can be inaccurate, but statistically, it's extremely unlikely that they would be inaccurate in the same way across multiple jurisdictions unless something was wrong. and to santo's team, if you are encouraging your supporters to stay silent or tell little white lies for god and rick, may i just say: well played.

after all, there is something compelling about an underdog story, particularly to americans. and the fact that these come-from-behind [sorry for any unfortunate imagery that puts in your head] wins keep happening bolsters the sense of momentum around the campaign. it also means that the overall nomination process narrative is more or less being dictated by the santorum people: mitt romney is continually cast as the privileged new england preppy with a sense of entitlement and the law on his side who is continually outwitted by a simple, hard-working man of the people. what's worse is that the more romney crows about his delegate count in response to criticisms that he can't buy a win to save his life, the more he plays into that image- the machinery of the political power structure is working in his favour against the wishes of the people. he's one step short of walking out to the tune of the death star theme.

big picture advantages aside, anyone who's worked on a political campaign will tell you that it's good to have the polls make things look tighter than they really are, because it makes it a lot easier to get your vote out. nothing is more nerve-wracking than having your guy up by 5% and everyone knowing it, because people tend to start thinking that they really don't feel like going to the polling station when he's going to slide by anyway. life for that campaign manager is hell.

the fact is that romney is still so far ahead in delegate count that talk of him losing the nomination seems strange. and newt gingrich, who came second in both races, is actually romney's greatest campaign asset, since without him to siphon votes from the right, santo's wins would have been annihilations [to say nothing of the fact that he would have triumphed in the tightly contested states of michigan and ohio with relative ease].

in fact, gingrich may already have effectively paved the way to a romney victory by playing spoiler in a handful of important states. when you look at what's left, it's hard to imagine romney losing either new york or california [although granted, the latter won't vote until june], which leaves only texas as a really major prize in the delegate sweepstakes. many of the most populous states have already passed, so even if gingrich were to drop out at this point, it's questionable whether santorum could catch up.

the more interesting question is whether or not romney would be able to secure enough delegates himself to guarantee a nomination before convention time. while i don't think that santo has it in his mind to run for the vice presidency, it might transpire that it becomes necessary for him to be the v.p. candidate because romney won't be able to count on the party's conservatives turning out in the general election unless santorum is with him on the ticket. [and don't talk to me about how long the obama- clinton 2008 fight went on. that fight was tough because both of them had such passionate supporters. i'm not convinced even mitt romney is a passionate mitt romney supporter, which means that a lot of people who back him now will see long voting lines in november, or leave work late, or get a great deal on a vacation and will think that four years really isn't such a long time to wait and flake off from their voting duties. mitt romney supporters are so ambivalent that they've drained the fire from ron paul supporters after paul was seen to be engaged in political shenanigans with the former governor.]

whatever happens, these last minute twists and thrills do make for compelling television. i also think that we might be witnessing the final transformation of american politics from reality into scripted entertainment, the more against-all-odds grassroots victories i see, the more sermons from madman newt, the more tragi-comically awkward television moments from the pre-ordained nominee [right now there are dozens of campaign workers coming up with reasons why, when mitt said he was going to win at least one state in the south, he didn't mean "win" in the sense of getting the most votes, but in some moral, "a bronze medal is great for the special kid" way that you see in bad movies, something his campaign is starting to resemble...] it seems like the real trick for the g.o.p. would be bringing this all back to the realm where we take them seriously again. as a friend of mine put it, it's become more "show" than "reality".

in the meantime, there does seem to be a biblical passion play happening for the souls of republicans and apparently it's also easier to pass through the eye of a needle than for an extremely rich man to get on the g.o.p. ticket this year.

[once again, thanks to dominic f. marceau for the wonderful "santo" artwork. i swear that i'm going to make these all into a set of greeting cards if he confounds us all by winning.]