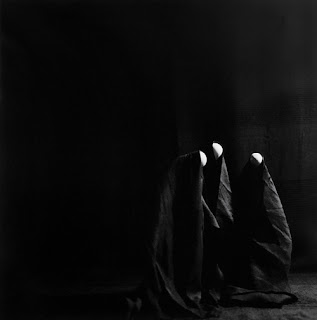 i actually ended up on the new republic's web site following a link for an entirely different story i saw on their twitter feed. but an image caught my eye and drew my attention elsewhere. this happens fairly often. in fact i can almost guarantee that i've ended up bouncing off to places unknown about seven times even while typing this short blog post. the various personalities occupying my brain have a competing set of interests.

but in this case, i'm very glad it happened, because my propensity for distraction ended up serving as an introduction to the unsettling, beautiful, nightmarish images of chinese photographer liu xia, wife and creative partner of nobel laureate and imprisoned dissident liu xiaobo. looking at her photographs feels like taking a lonely, possibly dangerous voyage inward, but at the same time seeing an expressionist lens turned on the uglier aspects of modern chinese history.

you can see images from her collection "silent protest" here. these will be exhibited at the italian academy for advanced studies in america at new york's columbia university from february 9 to march 1, 2012.