February 24, 2012
i would like to start off this post by saying that, contrary to what the bible might say, the wages of sin is exercise. when you've spent a lifetime on those small, seemingly meaningless sins that really shouldn't be sins at all, there nonetheless comes a time when you're forced to think about taking care of yourself. yes, that might mean minding what you eat, but really, it means that you have to take care of strengthening the various parts of your body that are prone to falling apart.

with that in mind, i set myself to work this week on an exercise regimen and as much as i know that this will benefit me in the long run, in the short run my days are full of pain and cramps and a sort of stiffness that makes me look like my grandmother did after her arthritis started to get really bad. even now, as i try to lift my hands enough to type, my shoulders are complaining. it's not a pretty sight.

that's my week, in a nutshell. there's other stuff that's happened, but basically every day of my week [including the one day off i gave myself] has been marked by this. i'm hoping that soon, i'll just skip forward to the benefits of this plan. i will say that i've generally been sleeping better this week, but that's really it. i'm wondering if the promised increased energy and sense of optimism are just lies told by health nuts to fool the rest of us into joining them in their misery.

but, of course, i still have some favourites i wish to share with you.

some people think it's obnoxious that the mormon church insists on "baptising" dead jews into their church. [they use a surrogate, which is considerably less creepy than digging them up, but still a bit presumptuous.] others have found a way to turn the practice back on the church.[thanks to disinfo for the link]

what's the weirdest thing you've found while renovating your basement? how about nearly $2 million worth of jewelry, a gun and a box of joy division and new order master tapes?

the road to hell is paved with good intentions. and unused t-shirts and shoes.

honk if you love libya.

yes, espn took it down within half an hour and they fired the person responsible, but this still has to rank as one of the most dubious moments in headline writing history.

omg. there's a nail polish colour called "santorum". now you know what to get me for the spring equinox.

if you're in montreal: it's nuit blanche this saturday! the all-out art fest where you can roam the city, viewing paintings, music, sound, film, performance and much more. events get under way very early this year- midway through the day- and continue well into the night. unlike other cities which have nuits blanches that go until dawn, things tend to wind down around two or three in montreal. also unlike other cities, which tend to have their nuits blanches in the spring or fall, when the balance of light and dark is about equal, montreal chooses to have theirs in the middle of february, despite having some of the worst winter weather south of the arctic circle. so bundle up and check out the festival's web site for information and maps so you can plan out everything you want to see. nuit blanche also has a very helpful smart phone app.

if you're in toronto :: check out burning chrome iii, a night of noise and experimental music taking place this evening at the charmingly named "devil's cellar" in the basement [how appropriate] of celt's pub. if i were still in toronto, i'd be there for certain. it's cheap and easily accessible and you can find all the details on the event's facebook page.

if you're in halifax [the canadian one] :: my old friend and former radio comrade waye mason is turning 40, which is sort of stressful, but he's turning his birthday bash into a fundraiser for the parker street food and furniture bank. several luminaries of the halifax indie rock scene will be playing sets starting at 10:30 sharp. the event takes place next friday at the venerable seahorse tavern and you can find all the details, including times for all the sets, here.  waye is also running for city council, so make sure to ask him what his plans are for the city. even better, wait until he's been drinking a while and then ask him.

if you're pretty much anywhere :: the oscars are on sunday night, hosted this year by billy crystal. [this is not a repeat from 1990.] meh. i'm hoping there are some "interesting" fashion choices, because i find it harder every year to get excited about film's big night.

i'm not the world's biggest prince fan, but i think it's impossible not to admire him, particularly when you watch this video. [thanks to dom for finding it.]

not too much on this front this week. of course, we're coming up on the big one-year anniversary of the caustic lounge on march 7th, so i'll be planning for that. other than that, i'll just take this moment to remind everyone that you can always access "a definable moment in time", the fiction serial updated tuesdays and saturdays, through this blog. the entirety of the story is up there, so you don't need to worry if you've missed an episode or two.

of course, you can always count on me live-tweeting the republican caucuses, which will be taking place on tuesday. so you should either check your twitter account lots or turn off phone notifications, depending on how that makes you feel.

although i'm going to make every effort to stick with my exercise plan- meaning basically that i plan to exercise- i have a feeling that the rest of today will be spent very much following seth's lead: 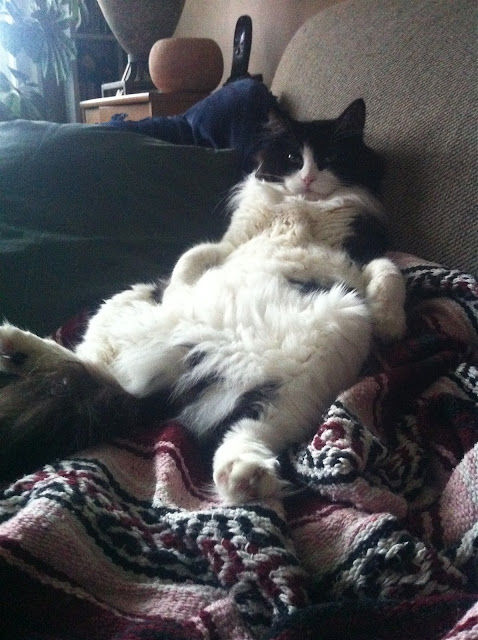 thanks for reading and i hope that everyone has a great week.