February 27, 2012
as i mentioned on friday, this weekend was nuit blanche in montreal, something i look forward to with a sort of whimsical spirit usually reserved for small children at christmas. there's just something about the idea of spending a night interacting with art, often in surprising and unexpected ways and places that stirs my imagination.

i hooked up with my good friend kathleen and we set out on our artistic quest.

while i feel that i did see a lot this year, i found the voyage a little bit frustrating. because the temperature plummeted on saturday night and the wind picked up, i decided to focus on the downtown/ place des arts section of the festivities. although the city offers shuttles and regular transit between sites, it's still necessary to run from one place to another in the plateau/ mile end area. so your options are finding one venue where you want to spend a lot of time, or spending a good chunk of your evening making sure you can still move your fingers.

unsurprisingly, a lot of people seemed to make that decision, which means that the crowds in the central area were pretty overwhelming. as a result, i feel like i missed out on a lot of things because i just wasn't willing to stand in long lines, particularly outside. compounding this was the fact that many of the installations in the underground city this year featured video and so they were housed in these adorable makeshift photo booths. it was an interesting presentation, but the problem was that those booths only fit two to three people at a time, which meant that things got log-jammed pretty quickly. as a result, i feel like we ended up focusing on whatever did not involve standing and waiting, which limited what we actually got to see.

the other problem, which is something that particularly afflicts the downtown "campuses" of nuit blanche, has to do with the audience. i really don't want to come off as a snob here. i think that one of the exciting things about having a combination of artistic and cultural events, some participatory, is that it should expand ideas of art and make it accessible to a wider audience. however, i really draw the line when "art's night out" turns into a playground for a lot of young drunks excited to be able to stay out all night. you know when you can be loud and drunk and get sick in public and stay out until all hours? every other saturday night.

i don't believe for a second that you have to be silent, reflective and "adult" in order to enjoy art, but if you're going to look at art, it's probably a good idea to, you know, pause from screaming at your friend three feet away and, you know, look at the art. and sure, you should interact with the installations when you can, as much as you can, but don't grab the bloody art if you're not invited to. don't lick the art. don't stick your body parts into the art. in the case of sound pieces, there is no prize for being louder than the art. and for the love of god, never push your friends into the art or try to knock it down.

in fact, if you think that any of the above sounds like fun, perhaps you should try to approach art slowly. look for stuff on the internet that's harder to destroy for yourself and everyone else.

now that i've finished my old lady rant, here are a few images i grabbed during the course of the night.

i apologise that the quality on many of them isn't great- the continuous movement and jostling all around made it difficult to do anything but grab a quick shot where circumstances permitted.

there was a certain temptation to grab one of these stacks and start placing them all through the nuit blanche sites, i must admit. 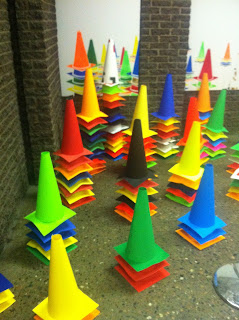 but instead, we just chose to be confusing by randomly pausing to explain the meaning of "art" we found. normally just destroyed stuff that carried a message of chaos and destruction. 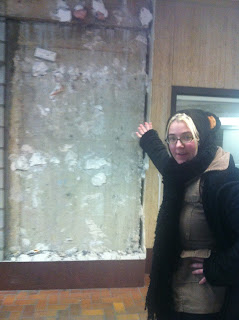 these "potholes" were really amusing. i wish there had been more than three. 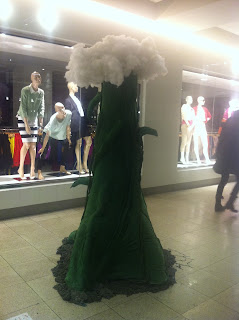 and yes, this guy was probably our favourite. 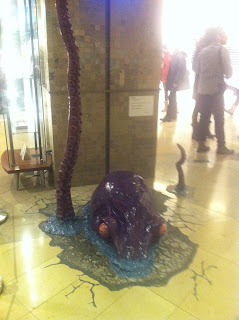 here's a little piece we like to call "dick move #5" 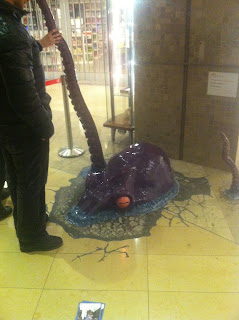 i think that this should really be left in the mall for good, personally 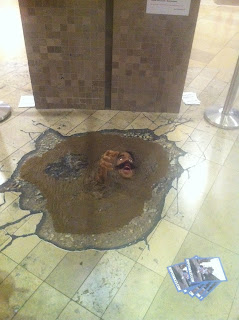 every year, there's a group mural that's made over the course of the night. most of it is comic and graffiti style and it's pretty much always worth seeing. 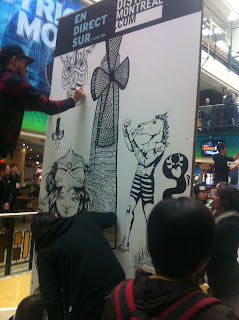 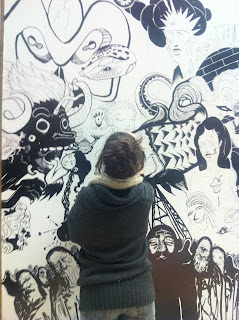 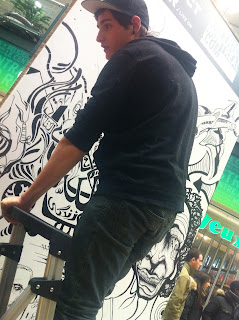 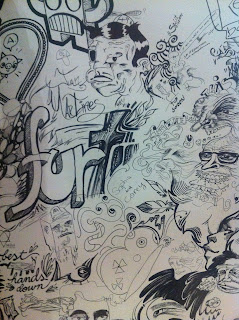 sure, it looks totally at home in an underground mall, but that door doesn't open. this was really well done and even had take out menus with advertised specials. the artist [and i apologise for not getting her name], apparently specialises in these "door to nowhere" type installations. 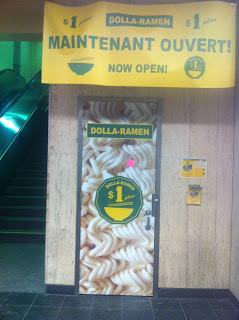 this said it was art, but i'm increasingly convinced i was looking at some colourful siding leftover from an abandoned interior decor project. who leaves their art leaning on an elevator? 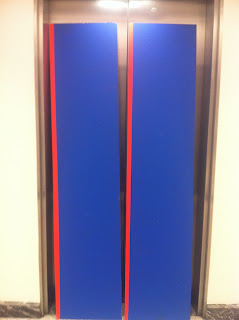 this series of silkscreened doors was probably better in person, because the ethereal image and ghostly movement was surprisingly hypnotic and unreal. 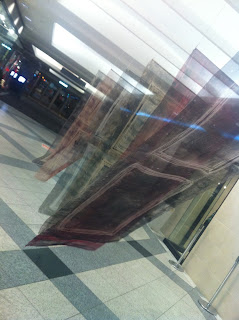 it also gave me the opportunity to take a super-pretentious picture of myself. yes, i'm totally using this if i ever have to submit an artist statement for anything. 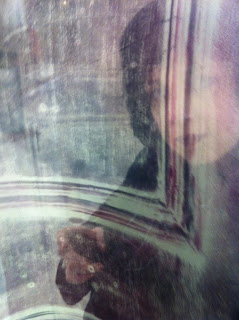 these people were really friendly and i sort of regret the fact that i forgot to go back and check on their woven project later on. i think it probably grew up to be quite awesome. 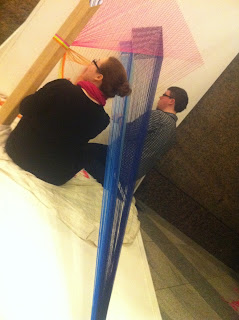 yes, i took a photo of the giant photo that says "photography prohibited". feel the meta. feel it!! 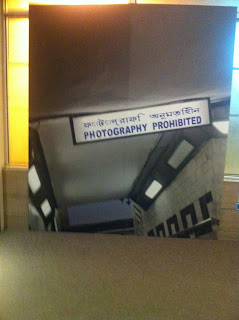 i'll have some more images for you in the coming days!