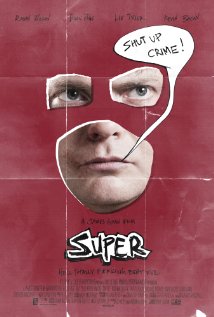 that "super" comes from the mind of writer/ director james gunn gives it a somewhat promising start. his previous indie efforts have been oddball and at the least interesting to watch and have their own unique spin on genre films. this is actually his second stab at a superhero story, after he wrote the script for "the specials", but rather than dealing with people who have actual super-powers, "super" is the story of one man who simply decides to become a superhero, without the normal mutations.

rainn wilson, best known as the uptight salesman-cum-beet farmer dwight schrute from the american version of "the office", stars as frank, an average [at best] guy who's married to sarah, the girl of his dreams [liv tyler], until she abandons him to go back to her former life as a drug addict with slick lothario jacques [kevin bacon]. bereft and profoundly depressed by this turn of events, frank is at a loss until he is touched by the finger of god and has the idea to take revenge on those who prey on misery and weakness.

aided by tiny, precocious comic store employee libby [ellen page], he concocts an alter ego called "the crimson bolt", who trolls the city for ne'er-do-wells in a hilariously ill-advised spandex mask and suit and exacts justice by thumping petty criminals on the head with a pipe wrench.

libby becomes aware of his secret identity and signs herself on as "boltie", the robin to his batman. able to indulge her own superhero fantasies, of course, libby turns out to be nearly completely psychotic and impossible to control, whose violent streak ups the ante of their crusading.

fighting crime on the street, though, is really a prelude to frank/ the crimson bolt's real mission: to rescue sarah and win her back from jacques and his gang of thugs.

the concept of the everyday guy with no special resources has a lot of possibilities- the positive message that anyone can find a superhero within, the comic possibilities of an actual superhero thrown into a modern city, the relationships between the various screwball characters- but it feels like, in an effort to keep the comedy dark and give the film a more typically "indie" feel, that gunn made some peculiar choices.

since we meet sarah when she's already pulling away from frank, we don't know her very well. and that doesn't change. she's a whacked-out blank slate for pretty much the entire film and the qualities that ultimately make her so special are articulated through frank, rather than shown. this is all the more obvious when contrasted with the over-the-top, explosive libby. from the first scene where she appears, page dominates the screen and the narrative, obscuring anything else that hoves into view. page's undeniable strength becomes the film's weakness, because the others just can't keep up. next to her, sarah's greatest strength is that she at least seems calm, but decidedly pallid.

the film also has an irritatingly hipster-ish soundtrack, which is not the thing that would sort of irritate me- or at least is the kind of thing i could normally tune out- except that it is all-pervasive. whether it's score or soundtrack, there is always jangly indie music chugging through the background [or, in a lot of cases in the foreground] and it becomes almost unbelievably distracting.

but the film's most problematic area can be laid directly at the doorstep of james gunn himself. despite being a dark-tinged comedy for its first two acts, the film takes an abrupt turn when it comes time for the crimson bolt and boltie to execute their raid on jacques' compound [in the middle of a high-stakes drug deal]. suddenly, you're watching a full-on, hurmourless action film with violent death, maiming and rape leading, of course, to a dramatic confrontation between frank and jacques that makes oliver stone seem light-handed. neither wilson nor bacon- nor tyler, who mostly whimpers in a corner- is up to the task of heavy drama and the weightiness of the script pulls them down with it.

it's a shame, because the opening of the story has great promise and much of the humour will crack you up at the same time you think "i shouldn't be laughing". during those times, you can see a pathos and vulnerability to frank that is lost when things get more "intense".

there's a fair amount of good in the film, but the pervading sense of confusion over style and message means that those things aren't necessarily what you'll remember.