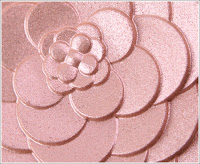 today it was -15 celsius outside. "spring" is not the first thought that comes to mind. certainly not the particularly delicate palette of spring 2012, marked as it is by ultra-soft pastels from the likes of dior [see here], lancome [whose spring collection features a fragile mix of pinks and cool greens] and eve guerlain. i say "even" because last year, guerlain's spring collection seemed to target those who were spending the first quarter of the year hiding in the tropics until the mercury rose. although some shades had a lighter payoff, there was definitely a lot of colour- red-corals, peach, pinks and the stunning centrepiece of the collection, the torrid "blush g", which became a popular favourite.

from that offbeat take on spring, guerlain has swung to the other side, with a palette of pink, pink and pink for 2012. [they call it "pink & black", but the black seems to refer to the packaging only. or to their newly launched mascara, which is kind of a separate thing.] i went through the whole "pink blows" phase and have made my peace with the colour. in fact, i've learned to quite like it [especially since i figured out it actually tends to make me look better]. but i have to say that it seems guerlain has really loaded their pre-easter eggs in an exceptionally girly basket.

LOOK INSIDE THE BASKET...


to be fair, there are some bold colours, to be found in the two four-colour shadow palettes [$64cad each] available with the collection. one is a selection of pinks, but they're not the more delicate shades. in fact, i think that these would be a real statement if worn together [pink eye shadow is not nearly as scary as some people believe].


the second eye shadow quad is a selection of aquas and teals, which i suppose is nice enough, but this is the third take on aqua/ teal/ blue that we've seen in a guerlain quad since the fall. i'll admit that i'm a wee bit prejudiced, because it's a colour family that often doesn't work on my eyes, but i'd probably be annoyed even if they kept releasing palettes of plum shades. [although, this seems as good a time as any to point out that there hasn't even been one.] nonetheless, if you are one of the world's many aquaphiles, the shades here are exquisite, even by guerlain's high standards. [and i should add that of the three blue/ aqua combinations we've seen lately, this one is definitely the best both in terms of colour and quality.] i'll try to enjoy the feeling of not spending my money, in the meantime.


there is also a six-shadow palette [named, as all their 6-shadow palettes are, for a guerlain location in paris], which breaks the bank at $90cad, but which is a more subdued mix of mauves and rosy taupes- colours that you're likely to get more use from. guerlain also packages their six-shadow palettes in an exceptionally beautiful metal case, so it's as much a pleasure to look at as it is to use. well, sort of. i found that four of the six shades were beautiful, had excellent colour payoff and blended easily. two of the more matte shades [swatched on top] were a little stiffer and it was harder to get them to show up. i think it would be easier to work with these using a brush, of course, but there is a definite difference in quality with those two.


colour-wise, i preferred the six-shadow palette, because i felt that i'd be able to use it without having to reach for "helpers" from elsewhere in my stash and because i thought there was a little more variance the shades. however, in terms of overall quality, i'd give the edge to the four-shadow palettes, in particular the pink one. my understanding is that all of the eye shadow palettes are permanent.

for the lips, guerlain is offering four new "rouge g" lipsticks and four "kiss kiss" glosses. normally, it's difficult to separate me from a rouge g once i've laid eyes on it, but i didn't feel that immediate bond with these. the four are varying shades of pink, which is fine, but they're exceptionally sheer. exceptionally. the swatches you see are built up a fair amount so that they'd show up in the photo. the formula is much more like the sheer "rouge g brilliant" and i have no idea why they weren't marketed under that formula. [although honestly, even those are usually more pigmented than these ones.] two of the shades- rose innocent and rose barbare- are cooler and two- rose ensoleillee and rose piquant- are warmer, but the differences are very slight.


the formula for these specific rouge g's includes "ruby dust", which allows the colour to cling to lips and last longer. which would be awesome if you can get it to show up in the first place. i tried on rose barbare, the deepest of the shades, shown in the photo below. [note- this is layered a little to get the colour more pronounced and even and it's the brightest of the shades. the photo was taken less than ten minutes after application, so this is as intense as you're going to get from any of these colours.] 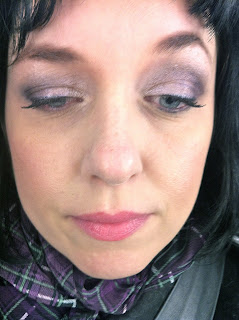 the picture actually makes the colour look bolder than it did in person. it had a glossy sheen when i first applied it, but that faded within minutes. i stopped by another makeup counter on my way home and none of them could tell i was wearing lipstick. in addition, when i was applying it, despite the slick, sheer formula, it was tricky for me to get the colour on evenly.

ironically, the glosses in the collection are a lot more pigmented than i expected [keeping in mind that they're glosses]. the shades are really lovely, too- an icy white-pink, a gold shimmered pink-peach, a saturated pinky coral and a perky semi-sheer fuchsia. these appealed to me much more and were much easier to differentiate one from another. the lipsticks may appeal to natural lip lovers, but i'd personally say that this is a case where you'd probably be best off saving your money [rouge g's are $50cad each] and picking up something like mac's sweetie or nars' dolce vita, both shades that give a lovely, semi-sheer flush of pink to the lips, with better results and a lot less of a hit to the wallet. the glosses, however, are worth the $35cad asking price.


my understanding with the lip products is that the glosses are permanent, but the lipsticks are limited.

once again, the real attraction of the collection is the astounding blush/ highlighter "cruel gardenia" [$76cad, the only product that is significantly more expensive in canada than in the united states]. and it is a beauty. it's breathtaking to behold, a finely carved pink rose, but it's even lovelier in use [which will make you feel less guilty about destroying that lovely design.]

more than anything, it reminded me of a silver-pink version of my beloved terra inca sublime radiant powder- soft and drenched in shimmer, which can be exceedingly glamourous or subtly brightening depending on how much you use and how much you blend it out. it also looks great tapped in the inner corner of the eyes to add a sparkly highlight. this is certain to be the hit of the collection and it is limited, but fortunately guerlain seems to provide lots of stock when they know an item is going to be in demand. [yes, mac cosmetics, i am giving you the stink-eye.]

i'm such a huge guerlain fan that i'm actually annoyed that i don't like this collection more. i'd say that it has a couple of definite hits, but it lacks the overall quality and cohesion of some of their other launches.