January 27, 2012
much of the hype around former model edward bess' cosmetic line is focused on his ability to make magic out of seemingly mundane shades. the collection is focused on naturals and nudes, the kind of colours that have been around a long time, but which still form the staples of most cosmetic stashes. after reading so many rapturous reviews of his products, i overcame a little of my hesitance [mostly caused by the fact that his line seems to have a distinct bias towards warm-toned complexions] and decided to dabble my toes in the sea of bess. 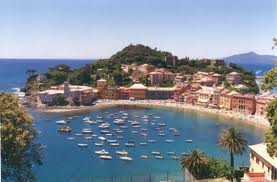 although the greatest number of rave reviews are for his eye shadows and lipsticks, i decided to take a chance on one of his "quad royale" palettes- a soft highlighting blush with four slightly different [both in tone and texture] shades designed to be used on the cheeks or as an all-over powder. i think i was drawn to these because it's dark and grey and snowing periodically and these quads are all named for locations along the mediterranean coast- "south of france", "summer in capri" and the most recent addition "monte carlo". these stir visions in me of gorgeous vistas of sea and sky and glowing, vitamin d-enriched faces lounging in the afternoon warmth and enjoying the sea spray in the air and a good strong cocktail à la "tender is the night". 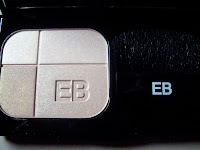 i selected "south of france", the lightest and coolest of the three, figuring that this would perk up my pale face without giving me the "fake bake" look i so detest. i wasn't sure what to expect, because some highlighters hardly register at all, while others tend to be overly shiny and emphasise pores. since i was buying this sight unseen [thank you, zuneta], i was taking a bit of a chance. but i felt good about it and my guts are generally very honest with me.

and indeed, it steered me very, very right. "south of france" is a sandy highlighter with a slight mauve-pink cast that comes mainly from the deepest colour of the four. it would serve purely as a highlighter on most skin tones, but on pale types [like me!] it has enough colour to work as a soft blush. it comes in a sleek black case with a brush provided. the brush itself is good mostly for a light wash of product, but not much more. i actually think that one of arthur's paws would be perfect for this, but he has no interest in helping me out, even though opening a salon with cats who could apply cosmetics would undoubtedly be a golden ticket for all of us and we'd be booking appointments well into 2016 already. so i've been using a regular dense, fluffy brush, which gets the job done, but isn't nearly as cool.

MORE IMAGES AFTER THE BREAK 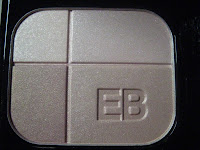 although there are four shades in the palette, no one of them is really large enough to use alone on the face. you could certainly try individual shades on the eyes, as a highlight along the brow or the inner corner, or wherever strikes your fancy [what you do with your makeup is your business]. it is perfectly possible to use two of the shades at a time, so you can use the darker shades in the lower half to create a bit of a contour and the upper shades to highlight. or you can use them all together. for something that looks like a small cake of pressed sand, it's a remarkable multi-tasker.

the effect is subtle, but quite glorious. the powder is very finely milled and less shimmery than a lot of highlighters, meaning that it imbues the skin with a healthy radiance, but also gives it a smooth, flawless surface- hiding pores, uneven colour and whatever else you've managed to do to mess up your skin. it's light enough that it's pretty much impossible to overdo. it never becomes cakey or glittery, never hogs the spotlight. it's not likely the sort of thing that people will notice, other than to tell you that your skin looks lovely.

i compared it to a few shades of mac's mineralize skinfinish and the one thing that stood out was that, next to the "high beam" effect of those, "south of france" looks almost matte. perfect topping, which i expected to be closest in terms of colour, shows a lot darker and warmer when swatched alongside "south of france". "soft & gentle", the only permanent shade i thought might be similar, looks gold in comparison. "by candlelight" is again warmer and darker. all of the mac powders look and feel heavy compared to the edward bess one. going from memory, i'd say that the quad royales have slightly more colour payoff than guerlain meteorites. 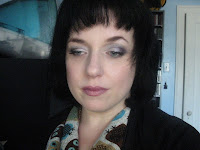 each quad royale is $45usd and can be ordered from www.edwardbess.com, from zuneta [where the price can work out better, depending on your exchange rate], neiman marcus and now from sephora, who have picked up most of the edward bess line [although not, strangely enough, his iconic eye shadows].  for fair complexions, i'd almost say it's a must-have, because it's the sort of thing you can use every day if you were so inclined. those with medium or darker complexions would probably want to check it out in person [if possible], or opt for one of the other shades. 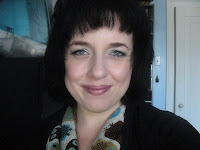 because it is a more subtle look, it's a little difficult to capture "south of france" in the wild. [i suspect that it's warmer, peachier cousins, "summer in capri" and "monte carlo" are a little easier to spot.] nonetheless, i thought i'd share a look i put together with it, just for kicks. 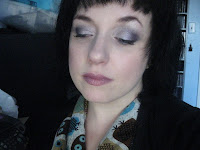 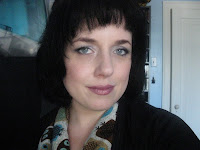