December 13, 2011
here's a few more images for you from around the montreal metro system. today, we're looking at stations in the east of montreal, or at least the narrow strip of the east that is served by the metro. yes, that last bit is supposed to sound like a snipe at city planners who inexplicably left the city's working class east end out of their public transit plans for far too long. in fact, the vast expanse of the island east of st. denis is exactly the sort of area that requires great public transit, being stuffed [in many cases to overflowing] with apartment dwellers and lower-income workers who are least able to afford a car, especially with the current price of gas.

the city has taken a lot of measures to improve bus service, to be fair and has done so while keeping fees quite reasonable [a monthly pass costs about 60% of what it does in toronto, where the public transit system is almost laughable]. but metro services remains [and, sadly, is likely forever to remain] a pipe dream.

as a result, a lot of the stations in the east end are under-utilised, because only a limited number of people live within easy access. and so these stations often have a haunted air and even at rush hour never have the chaotic throngs of their neighbours to the west. i'll admit that i'd never been to a lot of these stations before going on my mission to photograph them and i was flabbergasted to discover that the city was, in fact, hiding some of its architectural treasures out in the middle of nowhere.

but let's begin our journey closer to the centre.

this is beaudry station. years of refurbishment have left the inside of the kiosk looking like a very long moving sidewalk to hell [and smelling like one too], but the work done did yield a spiffy new exterior that proudly announces the beaudry's location just to the east of downtown, in the centre of montreal's gay village. the stretch of ste-catherine that runs through the village is closed to cars in the summer, making stopping in by metro that much more attractive. 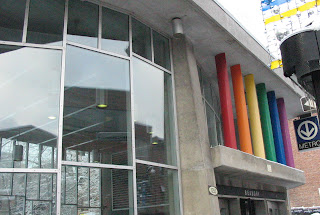 one stop east of beaudry, at the east end of the village and, many montrealers would claim, civilisation, is the papineau metro. this station also has a brand-spanking new exterior kiosk, which i hope has done something to improve the massive wind tunnels that used to make it difficult for two people to open doors at the same time. at the time i was taking my photos, the kiosk was still under construction, so i stuck to taking interior shots. there is actually quite a lot of art happening in the perpetual gloom, although the wacky temperatures inside [icy cold and windy in the winter, like a garbage incinerator in the summer] probably keep many from noticing.

moving a little further east, we have frontenac. it's bad enough that this station is located in one of the city's most depressed [and depressing] quarters, rife with the worst of urban poverty for decades, but it really does seem to be rubbing it in by giving the neighbourhood this, one of the bleakest stations on the network. sure, frontenac got the exterior facelift treatment as well, but seriously look at what these poor people have facing them when they head underground.

after frontenac comes prefontaine and joliette, but since we've already met them in part 1, we'll continue on... i'm afraid that not all of the stations had photos of a quality that i'm willing to share, but there's certainly more to see...

for instance, this is station pie ix. that's "pie" as in latin, as in it's the name of a pope [with the number nine after it], not as in dessert [although that would be kind of awesome]. the station is located under the city's largest sports stadium, which is notable chiefly for the fact that none of the city's sports teams play here with any regularity. the stadium has a name in honour of the event for which it was constructed.


can you guess which event it was? 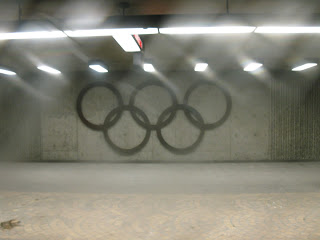 this is cadillac station. it's not one of the most exciting places on the line. like pie ix, it is a solid example of just how much the quebecois love their concrete. this is sort of an odd cultural thing for those who come from elsewhere. i mean, look at it. these people really love their concrete. but really, the true labours of concrete love are yet to come... 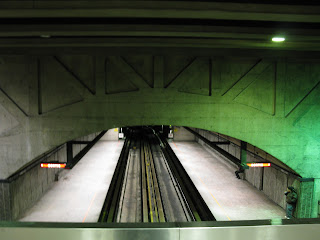 like here. this is langelier. just look at the use of concrete. look at the textures. look at the incredible shadows and angles and how it appears to have been carved from a single block... in fact, langelier also has a colourful arrangement of panels brushed aluminum with brightly coloured backgrounds that are actually doors, possibly to the underworld, that are quite cool to look at, but are quite difficult to photograph because even though the station isn't very busy there's always someone walking through your shot until you just want to set them on fire... ahem. behold. langelier. it's worth a visit, although the drab surrounding industrial expanse doesn't have much to offer. 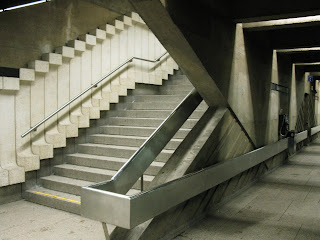 radisson metro is likewise consecrated to concrete. it is like being in vast church to béton, the god of concrete, with its cavernous vaulted ceiling, its suspended lights and echo-y acoustics. by the way, in case you're wondering about the relationship between quebec and concrete, it might be of interest to you to know that the mafia has much rumoured [and much proven] involvement in the quebec construction industry. so it's possible that concrete isn't the only material that was used in these structures. 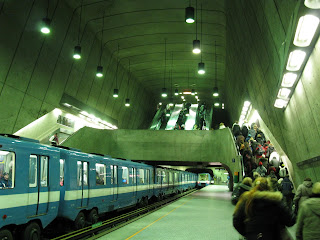 and here we are... honore beaugrand. end of the line. 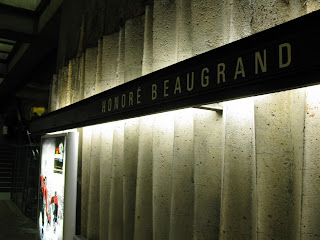 morelikespace said…
I've actually not been to Boston (despite it being fairly close), but I do find that the fact that Montreal opted to make all of its stations quite different and include local art generally makes it pretty interesting to look at. I do hope to make it to Boston (other than stopping in the airport) one day.
9:16 PM