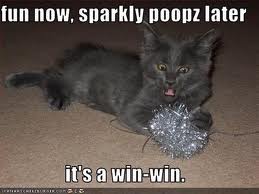 people have very mixed feelings about sparkling. that's not just a "twilight" thing, either, although that's certainly made the debate a little more contentious. on the one hand, there's the fact that people who sparkle can look a little weird- which is sort of the crux of the "twilight" bit, as i understand it- and decidedly unnatural. on the other hand, our eyes are naturally drawn to things that have sparkle because they stand out. but at this time of year, it seems like the message to women everywhere is that you're supposed to sparkle, because if you don't, you'll get lost in the long hours of darkness that mark the winter solstice.

i'm a little long in the tooth [which is kind of an odd expression, since teeth tend to get worn down with age] to get away with anything full on glittery, but i do still enjoy having a bit of lustre from time to time. here are a few of the things that help me scratch that itch [without causing other itches, which is sometimes a problem with sparkly things]. 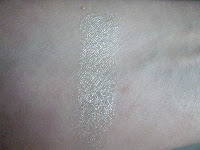 armani eyes to kill shadow #19 :: i completely adore these little pots of awesome that come in a dozen colours as part of the regular armani line. you can read my original review here, where i talked about "lust red". since then, i've added "pulp fiction", an dark, earthy cool silver and "purpura" a mix of gold and royal purple that is unlike anything i've laid eyes on before.

this is the sort of product that gives me a childlike sense of wonder and joy, because it feels like a cream, applies like a cream, but it's clearly a powder. you can apply it wet or dry and, apart from a few stray sparkles on first application [that are easily brushed away], it doesn't get everywhere and it stays put like it's fused with your dna.

for the holidays, armani has released three new, limited shades that are a slightly different take on the formula. these ones seem to have less of a strong base colour and more shimmer. the powders are even finer than the regular ones and have even more sparkle to them. there's a soft gold, a bright silver and then there's #19, a pure platinum that combines the two. there's something about this sort of shade that makes me think immediately of the 1930s and art deco, when platinum and white gold suddenly came to prominence [both as a metal and a hair colour]. this shade probably isn't something you're going to wear to the office- even more so than the regular eyes to kill shades, which are all a bit "dressy" to my eye- but it's definitely the sort of thing that will brighten your regard at a soiree.


nars blush "new order" :: this came out with the nars summer and, despite the fact that they have a new highlighter out with their holiday collection [the shimmery peachy "miss liberty", which is incredible in itself], i still think that this one is an excellent holiday choice. it's a light powder pink with a lot of gold and silver sparkle that adds a little colour on the fairest skin, but mostly adds a sort of diffuse fine glitter and rosy glow to the face, decollete... basically wherever you want to dust it. i know that a lot of people didn't enjoy the effect of this blush, but i love it [you can read my original review here.]. it makes me feel like i have my own personal lighting crew following me around. this is not something where the effect won't be noticed, so you'll probably want to keep this one to events that have lower lighting, but it's still something great to have in your arsenal. [there is absolutely nothing wrong with that sentence, but it just sounds... bad.] 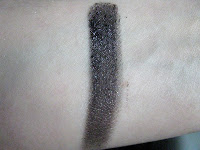 bobbi brown eye shadow "black sparkle" :: i picked this up with bobbi's utterly uncharacteristically dark  "black velvet" collection in the fall of 2010 and i find that, while there are a lot of cosmetic companies that have shimmery black shadows [namely, all of them], this one stands out because, rather than looking like a sheer black base with a couple of flecks of dry glitter in it, this one actually adds depth and the sort of sparkle that immediately makes you look mischievous. might not be the best choice if you're due for an appearance in court, but lovely for a night out. i do experience some fallout with this one, which means that you're probably better off applying eye shadow first then foundation, a lesson i have learned the hard way.

chanel vernis [also known as nail polish] "graphite" :: i occasionally want to kick myself for starting to look at chanel nail polishes, because it's a slippery slope. ever since uma thurman sported chanel's deep blood-red "vamp" for her date with john travolta in "pulp fiction", it seems like chanel polishes have gained a mythical stature in the public imagination, including portions of the public who wouldn't notice high end cosmetics otherwise. therefore, chanel's limited edition polishes can create quite a feeding frenzy and with reason. they are the standard bearers and every one of their coveted lovelies spawns an army of imitators, but quite often, there's some nuance to the original that remains unique to it.

the thing is, my feelings on the chanel polish formula are a little mixed. i like but don't love a lot of the shades and i find that the subtleties are often more visible in the bottle than on the nail [paradoxal, i'm looking in your direction]. but this fall, with the release of graphite, the stars aligned. the carbon black base with its mixed of gold and silver shimmer/ glitter [really something in between, since it's more pronounced than a shimmer, but completely smooth at the same time] is bound to draw the eye and at the same time, it applies perfectly and lasts well longer than most polishes on me [most of which start to show wear after about 6 hours].

although this one is limited, it's still available, so you can pick one up at your leisure. 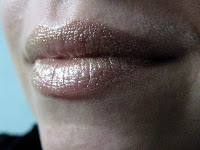 mac dazzle lipstick "liquid lurex" :: well it wouldn't be me if i didn't include at least one discontinued product you have to hunt down. here's the thing: this should be fairly easy to find because 1. it was only released in 2010, so it's not like it's been out of circulation that long and 2. it was actually released twice in quick succession, first with mac's "digipops" collection in the summer and then again two months later with the "fabulous felines" collection. so in theory, there should be lots of them out there. of course, in theory, the united states has the most fantastically incorruptible system of political checks and balances ever devised and communism works out well for everybody. but still, you should be able to find this with a little exercising of your google fingers.

all of mac's dazzle finish lipsticks warrant a look. they're like a frost finish on steroids, but they have absolutely none of the irritating aspects of regular frost-finish lipsticks- they aren't drying [quite the opposite, in fact], they aren't gritty, they're smooth to apply... so of course it makes perfect sense that mac tried them and then never brought them back again. oh well. 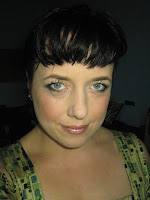 this shade stands out in particular because i've simply never seen anything like it. lots of companies have a holiday gold [dior has a pretty-looking one as part of their holiday collection this year] which can be worn on its own or layered for effect, but this is not just gold. it's more like an antique gold kind of look, much cooler in tone than what you'd normally think of when you think of the colour "gold", because it has elements of grey and green mixed in. and somehow, this works.

i took the close up shot of this lipstick and then realised that i was doing it a disservice. yes, the thick shimmer applies somewhat unevenly and there's nothing you can really do about it. it's very obvious close up. but seen at "human distance", that doesn't matter, because the shimmer particles catch the light and you don't notice the slightly patchy distribution. the full-face photo is a much better representation of how the shade actually looks.

so, yes, it's discontinued and a bit tricky to find, but absolutely worth the hunt!

and those are a few of my sparkling favourites. feel free to recommend some of your own.