December 07, 2011
yes, readers, we've finally arrived at the end of the book of seasonal reds. i wasn't really sure how to wind things up, because, as i mentioned, there are still lots of great reds i could share... but in the interests of having this end some time before next christmas, i've chosen to stop here.

i'd originally wanted to show the greatest variety in brands possible by not repeating any, but then i realised that i couldn't very well limit myself to just one chanel red [believe me, i could do a series just on those] and i wanted to call attention to my favourites. that said, there are some brands which inevitably got left out. sorry guys. another time, i promise.

way back when i did my "choose your lips" post, about which brand does which colour best, i had said that the runner up for reds was mac, not because of their regular red shades, but because they do so many great limited edition red shades. now that i've had more opportunity to explore, i think that second prize for reds should actually go to yves st. laurent, who just keep improving their range of available shades and finishes. but mac are still a strong contender [as is makeup forever, although their finishes are more limited], as long as you don't get too frustrated that their best reds are limited edition.

i know that many people go gaga for mac's standard reds, particularly cardinal "russian red" and blue-toned "ruby woo". i like those colours, although i don't think that they're especially unique and i just find the formula too heavy and [especially on the latter] too drying. for whatever reason, mac seem to save their best efforts for shades that are only around for a couple of months [if you're lucky], which just goes to prove what i've suspected for a while: mac cosmetics' product development department is staffed completely by sadists.

but i can get with that, which is why, for my last red, i've chosen a limited shade from 2008 that can be tricky to find. that's not to say that you can't find it- i did- but you really have to want it. you have to be willing to offer some sacrifices to the aesthete gods and do everything they tell you. and, of course, you have to look. the aesthete gods don't do your work for you.

my choice was also partly guided by dom, who was surprised i hadn't done a darker red shade yet. of course, it's not like i haven't done dark, dramatic lips before in looks that i've posted, but he does have a point in that darker reds are some of my very favourites. so i went with something a little deeper, without being full-on vampy. [if that's what you're looking for, i did list a few of my very favourite vampy lipsticks here and, who knows, i might do that as my next series. god knows i have enough dark lipsticks.]

this was released with mac's "cult of cherry" collection, which, i keep mentioning, was my favourite mac collection of all time. this lipstick just sums up everything that i loved about the collection as a whole. it's deep and rich and saturated and glossy and alluring and... well, it's a damn fine red.

it's certainly a darker shade, but it's also very elegant, the kind of thing you could wear to a cocktail party or a business meeting. i like the fact that, unlike a lot of darker red shades, it doesn't veer into purple-berry territory or into brown-ground. it stays a gorgeous dark cherry red and, while it pulls a little cool, i think that women with golden or olive undertones could wear it just as easily as those of us with rosier cheeks. [meaning my skin is naturally a little pink, not that i have gin blossoms. i swear.]

like most strong shades, it requires little in the way of adornment and i had an idea of combining it with other dark or muted takes on primary colours, so that i used tones of yellow, blue and, of course, red. i don't think that the "primary-ness" stands out in the look at all, at least not in a wonder woman kind of way, but it is there. oh, and speaking of wonder woman, that is one of the blushes from her mac collection released earlier this year. in fact, almost this whole look is a selection of "shit from mac you can't get anymore", but that doesn't mean you can't hunt it down. 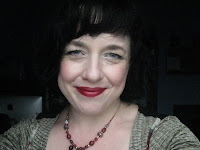 here's what i used. [as usual, i've suggested alternates for limited products at the bottom. doesn't mean they're duplicates, but they are available.] 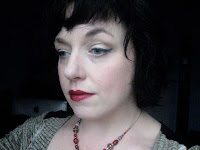 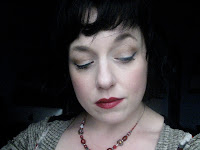 i hope you've found some reds to inspire and thrill you. i'll post a recap shortly for those who might want to see everything at once.

oh and while i was out christmas shopping yesterday, i bought myself a little present... a brand new red lipstick.