December 31, 2011
so this is how it ends... it's the very last "friday favourites" of 2011, which means i really should be reviewing my favourite things from the entire year. my friends, i can't say i'll miss this year very much, which is sort of frustrating, because i said the same thing last year, but i guess the good news is that i'm fully aware of the problems i have and the things that will eventually solve them, which is actually an improvement on last year, when i felt like things had been largely out of control.

but the fact that i'm happy to be moving on to 2012 doesn't mean that there weren't parts of the year that i enjoyed greatly. in fact, there were several things that stand out. i've decided to divide my preferences into a few posts- this one is more general, but there will be separate ones dealing with music- and beauty-related things. i should have both of those ready for you tomorrow.

in world affairs, i've obviously been getting way more than my fair share of involvement out of the campaign for the republican presidential nomination. i see now that mitt romney and rick santorum are having their turn to surge, which i think means that romney is the new anti-romney. i'd like to thank all those of you who've followed me on twitter, both those who found me because of my incessant need to tweet the republican debates and those who stuck with me in spite of it. one of the things about insisting on indulging all my selfish interests is that i'm sure some people end up wondering what the hell they've gotten themselves into. 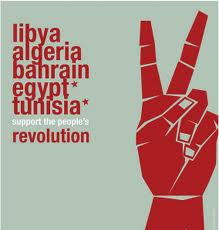 really, the biggest event for me was that, for once, i agreed with time magazine's choice for person of the year. well, it's been known to happen in the past, but i didn't expect they were going to go with my choice. then again, it's hard to ignore the power of the protestor and it's encouraging to see that, despite repression of varying sorts [depending on where in the world you're protesting], those voices are being heard and causing change. dom and i were at the vet's office having our little boy seth checked out [he has some occasional problems with asthma, like his mum] when we found out- via twitter, appropriately enough- that hosni mubarak had resigned, after weeks of insisting it would never happen. of course, there are still big problems facing egypt, but i can't help but admire that "ok everybody, back in the square" attitude that prevailed when things weren't progressing well or fast enough. it remains to be seen what will happen in egypt, tunisia, libya, syria, bahrain and across the arab world, but the most important element is that there are more voices being heard. [and, i should add, that holds true even when we don't like what's being said. the transformations of the arab spring will likely make things more delicate and complicated for governments in the west. such is the nature of democracy.] 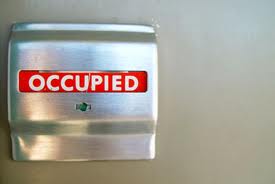 on these shores, of course, we had the much maligned and misunderstood occupy movement, which strikes me as a sort of pan-movement, indicative of broad-ranging dissatisfaction rather than focused anger. that openness of message was often used against the protestors who marched, camped, fed and sheltered [remember those services the next time someone harps about how much the protests were costing- many of the people eating and sleeping at those camps would have otherwise been at municipal soup kitchens and shelters]. the protests in canada were generally defused when the camps were dismantled [sometimes with acrimony, but often, as here in montreal, with a remarkable sense of cooperation]. in the united states, they have moved to a new frontier, peculiar to their specific cultural situation- occupying homes foreclosed on by banks who received billions in taxpayer funds after having blown up the economy in 2008. the more attention shifts to scenes like these, the harder it is for bitter conservatives like newt gingrich to laugh off the voices of the people by saying that all they need is a bath.

i think i was especially relieved to see these sorts of protests, because they showed how such things can be done well- unlike events in england which saw people targeting such corporate monstrosities as an independent record company and a multi-generational, family-operated furniture shop. way to stick it to the man, guys.

i don't feel any great sense of encouragement when i look at the governments of either the united states or canada, but i am hopeful that the badness of the times will encourage more people to speak up about the obvious inequities of the financial and political system, which perpetuate gross inequalities.

well now that's a bit heavy for a friday night, isn't it?

on a personal level, although i think i could have done better, there are a few accomplishments i'm proud of. i was really happy to be able to envision and create a short film earlier this year, something i didn't know how to do until, well, until i did it.

although i would like to have written more, i am pleased that i got back into publishing "a definable moment in time" [which got its name this year, thanks to dom], especially since it's encouraging me to finish a project i've been working on for a few years.

i was very happy to get the opportunity to do a regular dj night [the first wednesday of the month, if you've been wondering], especially since the folks at cagibi are so lenient with what i can get away with. i've been very appreciative of those who have come to those nights and who have taken the time to ask about what was played or just to say that they enjoyed it. plus, of course, i've had the opportunity to do other nights, including a couple of returns to the radio waves, something i'd not done in years. these things have brought a lot of smiles to my face.

i'd also like to add that, on the level of personal satisfaction, this blog ranks really high for me this year. although i started blogging here in 2005, my efforts had always been sporadic. this year, since i had more time on my hands than ever, i decided to really see what i could accomplish. 2011 has seen more posts on a wider variety of topics than any year previous. there has been more traffic- far more- than ever. i have received more feedback through comments here, on facebook, on twitter or through other means and that has been an amazing source of encouragement. i think it's telling that the most popular posts for 2011 include ones on the subject of cosmetics, politics and mental health. i'm aware that what i do here- maintaining a blog that features my blah-blah on any number of topics- is a little confusing and can be difficult to follow, but i'm happy that there are those who have chosen to follow, if not every post, then at least from time to time.

i am indebted to you all for your interest.

a few weeks ago, i indicated that i was going to be playing around with different layouts and, indeed, i did. here are a few of them: 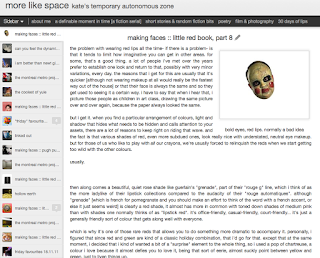 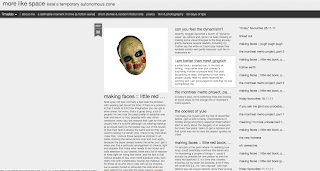 if you missed me trying out the new "dynamic" layouts, it's because "dynamic" turned out to be a code word for "bollocks". the layouts that i tried were all sort of interesting to look at, but they were incredibly difficult to follow. it wasn't clear where old posts were located, everything in my side bar disappeared and the instructions on how to get things working again were predicated on going to a page that no longer existed as an option within blogger. so, i went back to a standard layout, being mindful of those who'd told me that my previous layout was making them blind, and tried a slightly different colour scheme. i'm still not sure that i'm crazy about it- there's something about the old grey-on-black that was more "me" [i.e., difficult to make sense of -ed.], but i am very happy with the cool new banner that dom designed for me. so at least that'll be a sharp new look for 2012.

i hope that 2011 has been a fulfilling year, but if, like me, you have had a rough time of it, i'd like you to all follow the example of hecubus below: put it behind you and look forward. 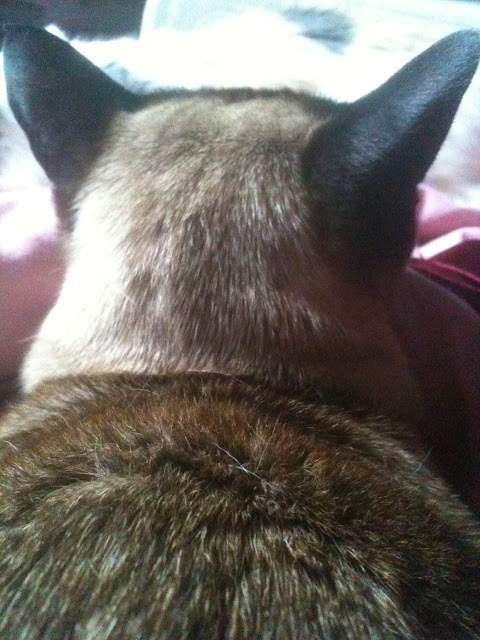