November 15, 2011
i don't know why i like to torture myself with this sort of thing. it's sort of like the question of whether or not you'd want to know when you were going to die. you know you're not likely to enjoy it and you can't do anything about it, but you still can't resist the allure of knowing.

so today, i checked out the forecast for winter 2011-2012 on the farmers' almanac page. and part of me really wishes i hadn't. 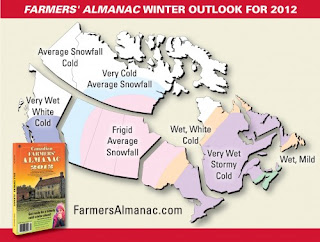 canadian winters are already famously harsh. true, that's not always the case and everyone i know swears there's less snow these days than there was when we were children. [it doesn't seem to occur to any of us that cities have just gotten better at clearing and disposing of snow in the decades since we were young.] there have been mild winters on record. but there have also been winters like that of 2007-2008, where the area where i now live got about four metres [12 feet] of snow [not all at once!] and i was sick from november to april. not so good times.

so it looks like we're in for another season like that one here in the eastern-central district of canada. which i could handle, but is it really necessary, farmers, to rub it in by describing the upcoming season as "clime and punishment". sure it's clever, but it's kind of rubbing it in as well, which is a wee bit unkind. considering we do the whole changing the clocks thing twice a year for you [except in saskatchewan, which, ironically, has a lot of farmers].

i guess this serves as motivation for me to get outside and enjoy the unseasonably warm november weather we've been having while i still can. stupid farmers.

Martin Rouge said…
Thanks for the head's up. I'll stock up on the Buckley's and sent my Soviet wool to the cleaners. I'll be ready for the few block I need to walk to go to work...
3:32 PM