November 23, 2011
here we go again! some more metro photos. today's shots are all from the green line of the metro, which is the oldest of montreal's four lines and the one that travels through the heart of downtown. sadly, it's also home to the system's greatest eyesores, stations conceived in haste, or desperately in need of repair. of course, some of its stations are exceptional [unfortunately, the most striking ones are outside of the downtown core]. today's shots have a look at those stations that most visitors have probably seen- those along the section of the line that runs right along ste-catherine/ de maisonneuve. there's good, there's bad and, yes, there's ugly...

this is atwater station. i could show you twenty photos of it and they'd all look a lot like this one. about the only thing that breaks up the great beige monotony is the advertising, which often includes very colourful entries from apple. on its own, well, this is it. 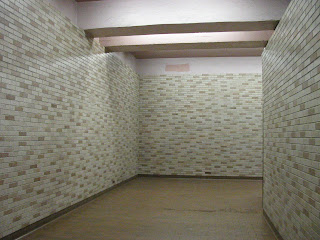 and now we move on to guy-concordia. stationed under and named after one of montreal's english-language universities, this stop truly shows the montreal system at its worst. the whole thing appears to have been constructed out of spare parts or leftovers from other stations. [that's not me being sarcastic- you can see many of the elements used to "decorate" guy-concordia in other places, used more tastefully.] worse yet, the dingy walls reveal cracks and leaks that make it look like the whole thing is about to come crashing down around your ears. on second thought, that might not be such a bad thing in the long run. 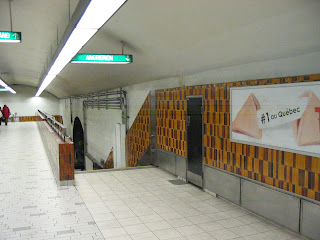 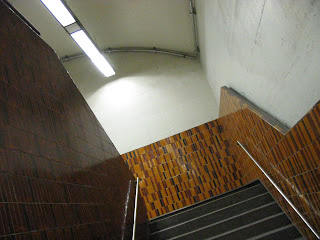 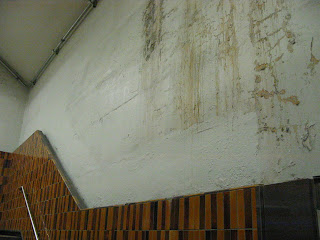 peel station is at the heart of the heart of downtown. connected via underground walkway to virtually everything [including other metro stops on both the green and orange lines], it's distinctly unimpressive. dirty and strangely claustrophobic, it's chief selling point is that there are exits everywhere, so it's easy to get out. 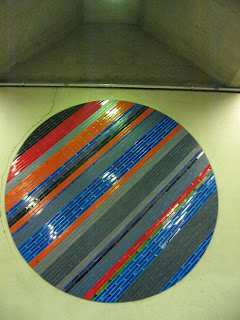 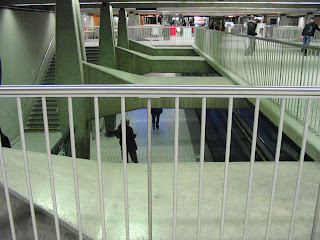 for those of you who thought i was being unfair to peel station by characterising it as filthy- because who wouldn't expect a station in the middle of downtown to be filthy?- i draw your attention to its next door neighbour, mcgill station. named after a man who gave his name to both a downtown street and the city's other [more traditionally reputable] university, this is the busiest station on the network, which means it should look like a garbage heap. except it never does.

bright, spacious, conveniently connected to absolutely everything [i swear you can walk to the airport from here], it has displays telling you the news and the air quality and it's one of the few stations that lets you know when the next train is due. 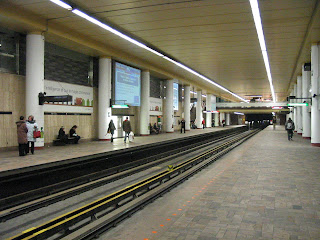 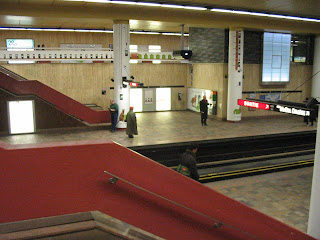 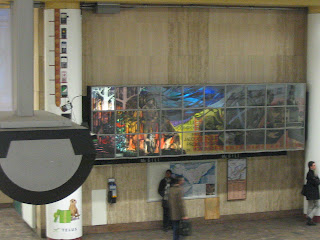 metro place des arts is, as you might imagine, situated under the city's largest complex of visual and performing arts. housing several theatres, the modern art gallery and the outdoor space where all of the city's summer festivals [jazz, comedy, francofolies, parts of mutek, etc.] take place, it's an appropriately elegant-looking space with modern-looking shades of grey stonework, stained glass murals [i've taken a few shots of my favourite one, to give you closer views] and a long vista between the entrances at the far ends of the station.

unfortunately, the area outside the stop has been under construction for about seven years, meaning that the spot to which the city directs the bulk of its high-season tourism appears about as hospitable as a lot of areas of afghanistan, depending on what's being imploded that week. it's a real embarrassment for those of us who live here that every summer, when the folks arrive to appreciate montreal's famed old-meets-new-world beauty, that they're treated to a spectacle of bulldozers and giant holes in the ground. we hope that they mistake it for modern art. 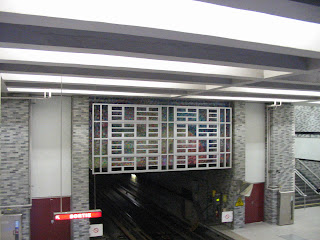 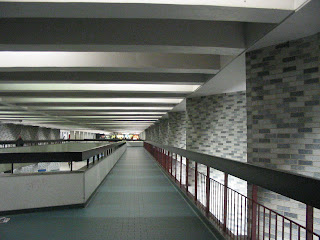 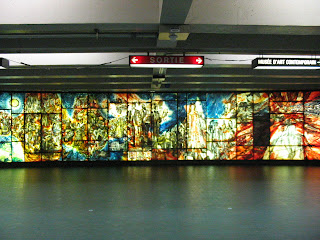 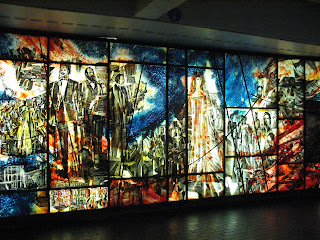 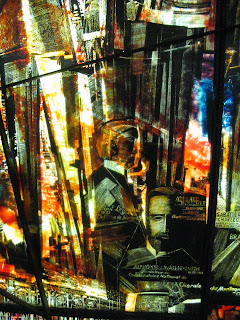