November 17, 2011
as i've mentioned here previously, i'm a big fan of public transit systems. it's not just that they're environmentally sound, or that a proper one can make the difference between a liveable and a miserable city, but i actually get quite fascinated by the systems for their own sake.

in late 2008, having some time on my hands, i decided to photograph each of the metro stations in montreal and, over a period of a few months, i did just that. unlike a lot of systems, each station in montreal has a unique design and features artwork by a variety of celebrated quebecois artists. every day that we travel through the city, we're subconsciously absorbing its culture, which is kind of a wonderful thing when you think about it.

all in all, i took more than three hundred photos and, in an excess of civil pride, i thought i would share some of my favourites here over the course of a few posts. here's the first installment. more to come over the next little while. they're presented in pretty random order, which is more or less indicative of how i photographed them. some of the shots are a bit grainy, as they were taken with my old camera, which was on it's last legs at the time.

this is vendome station, one of the most futuristic looking stops. 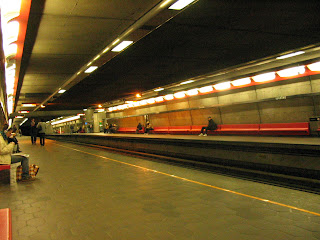 prefontaine. i used to live near here and one of the only advantages to the neighbourhood, aside from cheap rent, was having this as my metro station. it's a real gem, flooded with natural light. 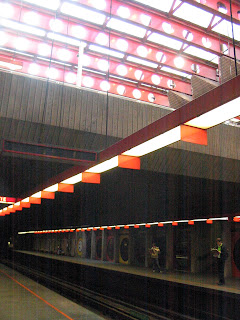 joliette. one of the ugliest stations on the system. this is its most interesting feature, which is either retro cool or tacky, depending on one's point of view. the rest of the station is sort of urine-coloured. 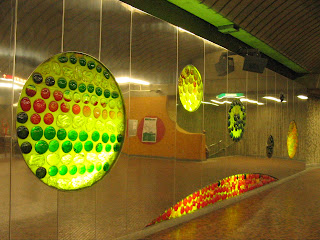 villa maria. one of the more colourful stations. 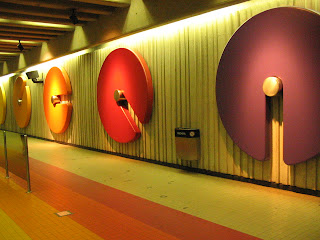 i love this sculpture that descends from the ceiling at namur. 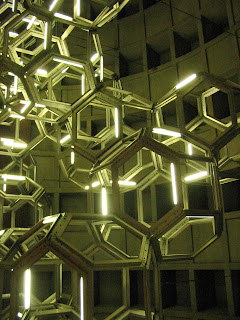 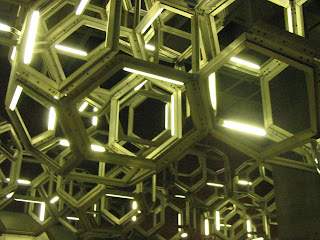 de la savane. the network's least used station is probably my personal favourite. it looks like it was constructed  out of leftover sets from "the cabinet of doctor caligari". 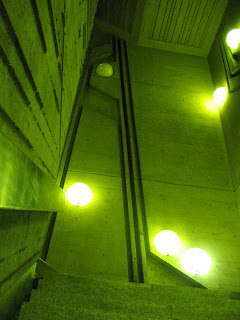 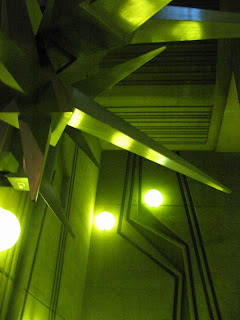 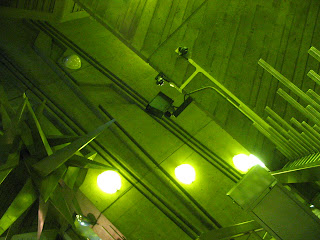 ahem. not quite sure where this one is. i think it might be plamondon. 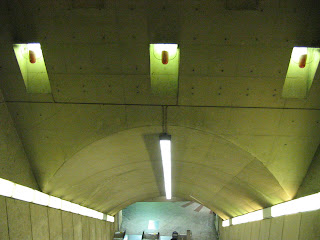 cote-st-catherine. i find this one very cheery, most likely because of the sunshine yellow accents. 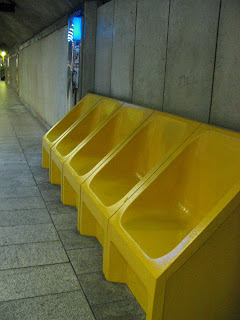 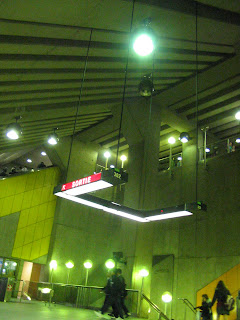 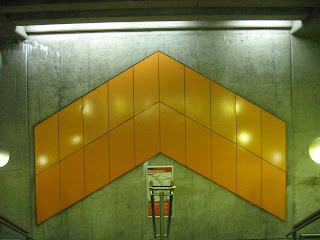 anahdara said…
(I tried to post a comment this morning, but I don't think it worked...if your getting it twice, please ignore!)

I didn't realize de la savane is the least used stop...!
When I was growing up in the west island my dad always preferred to use de la savane as his preferred drop off/pick up point for trips into the city...

looking forward to your next installments...
10:34 PM

morelikespace said…
I have to admit, I had never been to this stop (at least I never got out there) until I photographed it. I'm glad to know that it got some use!