making faces :: a manchurian candidate i'd vote for

November 03, 2011
whenever people ask me where to get started with nars, my answer is always that their blushes are justifiably famous, probably the best on the market and that it's difficult to go wrong with their eye shadow duos. my logic behind recommending the duos is that, while i like almost all their shadows, you get a lot of product for your dollar in the sets and their combinations are almost always spot on. that last point means that they do a lot of the thinking for you, basically handing you a pair of shades that can be applied no matter how tired or hungover you are. a lady needs things like this in her arsenal.

although holiday collections have been sprouting like steroid-laced ivy in stores and on line recently, i promised myself that i wasn't going to say a damn word about any of them until after halloween. understand this, marketing world: the holiday season should never interfere with my ability to enjoy candy and scaring the crap out of small children. i'll give you november and december, but you have to cede october to me. end of discussion, ok?

that decision to not talk about holiday collections, however, hasn't stopped me from buying things from holiday collections. i figure that indulging myself and leaving less money for the presents i give others is really the least i could do in the spirit of humbug. and besides, after the deep, soulful shades of fall, i have to admit that, cosmetic-wise, the bold reds and sparkling whites and golds of the holiday season are my favourite.

that said, nars seems to be doing everything they possibly can this year to thumb their elegant nose at notions of seasonally appropriate colours. their spring collection was an oddly dark, their summer collection, while it had some pops of colour, featured an amazing smoky eye combo and a dazzling holiday-esque highlighting blush. their fall collection was sweetly understated, like the arrival of spring. it's like someone keeps packing the wrong products in the shipping boxes at the beginning of each season.

SEE HOW FESTIVE THIS CAN GET...

personally, i think it's kind of refreshing to see a company that always has a different take on the season. and so, it came as no surprise to me when i saw their holiday collection reminded me of nothing so much as the rich foliage and stormy skies of late autumn. if i'd been able to guess what they were coming out with, i would have been so disappointed.

i'll likely go back for more goodies from this collection, but the first thing i leapt at was, fittingly, the seasonal eye shadow duo. like almost all of the duos released this year, this one will be added to the permanent assortment of products available, so you don't have to rush out and buy it right away. but you should.

the duo "mandchourie" didn't initially appeal to me too much, when i saw it in photos. i like blues, but i find that they can have a tendency to make me look washed out unless they're very light [probably because they mute the colour of my eyes more than other shades]. when i saw the colours in person, however, i went into "makeup lovers trance", a condition that many women [and some men] will know as the state that occurs when you meet something lovely and very special.

the two shades are a matte denim blue that seems like it should be fairly easy to duplicate, but actually looks like nothing else i have and a medium grey-blue based shade with a greenish gold shimmer. the matte shade is nice, but the shimmery shade is a knockout. it's ridiculously complex, with elements of blue, gold and even a faint teal tinge under certain light. there aren't too many shades that i can't compare to other things in my collection, but i've seriously not seen anything like this. it applies very smoothly and evenly [as virtually all shimmery nars shades do] and can be built up from subtle to fairly intense on the lid. the shimmer isn't quite as intense in use as it looks in the pan, but it's definitely there.

the matte shade is a little dry and powdery [you can see this when swatched], which concerned me at first, but since nars shadows can be used dry or wet, i tried applying it with a slightly damp brush. worked like a charm. being softer, it requires a very light hand when blending, but it holds up well and doesn't fade or migrate. i love the fact that it actually looks blue in use, where as many darker colours look like a sort of muddy soft black. 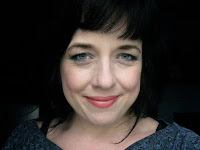 like i mentioned at the outset, nars duos are great for doing speedy looks, since the colours work so well together. this one is certainly no exception. you can get a lovely, slightly smoky blue going in a couple of minutes [which is how i used them]. the entire look below was less than ten minutes work, going fairly slowly so that i could observe how the colour built up. ah nars, thank you so much for allowing me to look nicely composed, even on mornings after i dragged myself home by my lips. 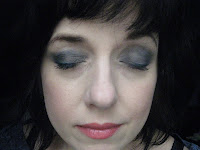 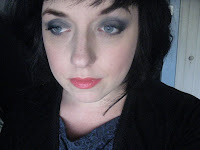 suggested alternates :: siahi = yikes... my advice would be to combine a teal liner with a black base. the only close shade i've seen was mac's "midnight blues", which is nearly identical, but also limited. but everything else i used is permanent...

Biba said…
I really like NARS duo eyeshadows from all the swatches I've seen.

And I love the combination you have used - I think this lipstick goes so well with the e/s!
3:51 AM

morelikespace said…
Thanks Biba! These duos are probably my favourite thing about Nars. Great, inventive colours and excellent combinations for quick looks.
9:41 AM