November 30, 2011
the problem with wearing red lips all the time- if there is a problem- is that it tends to limit how imaginative you can get in other areas. for some, that's a good thing. a lot of people i've met over the years prefer to establish one look and return to that, possibly with very minor variations, every day. the reasons that i get for this are usually that it's quicker [although not wearing makeup at all would really be the fastest way out of the house] or that their face is always the same and so they get used to seeing it a certain way. i have to say that when i hear that, i picture those people as children in art class, drawing the same picture over and over again, because the paper always looked the same.

but i get it. when you find a particular arrangement of colours, light and shadow that hides what needs to be hidden and calls attention to your assets, there are a lot of reasons to keep right on riding that wave. and the fact is that various shades of red, even more subdued ones, look really nice with understated, neutral eye makeup. but for those of us who like to play with all our crayons, we're usually forced to relinquish the reds when we start getting too wild with the other colours.

then along comes a beautiful, quiet rose shade like guerlain's "grenade", part of their "rouge g" line, which i think of as the more ladylike of their lipstick collections compared to the audacity of their "rouge automatiques". although "grenade" [which is french for pomegranate and you should make an effort to think of the word with a french accent, or else it just seems weird] is clearly a red shade, it almost has more in common with toned down shades of medium pink than with shades one normally thinks of as "lipstick red". it's office-friendly, casual-friendly, court-friendly... it's just a generally friendly sort of colour that gets along well with everyone.

which is why it's one of those rare reds that allows you to do something more dramatic to accompany it. personally, i figured that since red and green are kind of a classic holiday combination, that i'd go for that. except that at the same moment, i decided that i kind of wanted a bit of a "surprise" element to the whole thing, so i used a pop of chartreuse, a colour i love because it almost defies you to love it, being that sort of eerie, almost suckly point between yellow and green, just to liven things up.

i think that the end result is still a bit dramatic, something for a night out, but it's still different than the usual red lip/ neutral eye combination. thank you, guerlain, for making me think outside the tube. 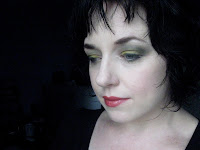 here's what i used: 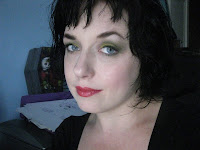 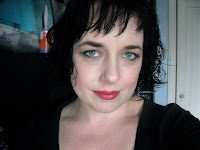 and for any eagle-eyed followers of this blog who might have checked out that middle picture, yes, those are the original drawings of neville sitting next to me. and yes, he's still around. we had tea last night and he talked to me about dreams. then i finally fell asleep and dreamed that i was living in an apartment with a close friend, who occasionally turned into a very pretty dior lipstick. that's right people, i dream in lipstick.