i'm actually at the point where i'm realising how long i could potentially continue this series and i'm wondering a couple of things:

1. could it actually be possible for one person to own too many red lipsticks?

2. is it time that i started throwing out my older red lipsticks, even if they still smell fine [i.e., no "red crayolas" with that distinct eau-de-crayon stench], since they've long passed their best before date?

with regard to point #2, i have to admit that i only found out in the last couple of years or so that lipsticks have a best before date. previously, i stopped using them generally only when they developed crayola-stink or when they became too dry to deposit colour without being melted a bit first. turns out, you're actually supposed to throw out cream-based products, including lipsticks, after about six months, whether or not they've "turned". but seriously, no one actually does that, right? i have a gorgeous red lipstick from mac that dates from their holiday 2000 collection and i have no intention of giving it up as long as it works. does this mean my lips will fall off?

the thing is, despite the fact that i have collected a red army that could conquer a small country, i still keep adding more of them, because i always find ones with elements that are distinct from ones i already possess. witness my latest red acquisition, chanel's holiday red, "famous". it's a rouge allure, meaning it's softer and a little less opaque [although in this case, it's pretty close to opaque, even with a single pass] and for once, i didn't find that it made my lips feel tight. [some rouge allures do, despite the fact that every other person who's ever tried one insists that they're moisturising.]

this particular red is very pink-toned and it has lots of fine fuchsia shimmer throughout, which emphasises the pink-ness. although i generally don't put a lot of stock in warm vs. cool debates, i do think that this one cuts particularly cool and wouldn't be as well suited to those with golden or olive undertones. sorry ladies, more for the rest of us.


i know that some chanel fans were annoyed because this colour is very close to the limited edition shade "rouge byzantin" that was released as part of a chanel-boutique-only limited edition collection this summer, but in chanel's defense, it's important to note that i didn't have the opportunity to buy anything from that collection, since i don't live near a chanel boutique and chanel.com won't ship to canada. so even though it may look like a repeat to some, the real point here was that chanel obviously felt it was important that i have a chance to get this lovely colour. i hope that clears things up.

the second i put this on, i felt like i should immediately rush out and do something bold, something daring, something that would make me, well, famous. however, all the ideas that sprung to mind carried prison sentences, so i just went out and bought cat food instead. but let me tell you, i was the most ravishing diva in the pet food store, by far.


because this lipstick is so undeniably fabulous, i did feel the need to take it out for a stroll and a coffee, but it's made me promise that next time, we can go to a chic restaurant, or out for cocktails, because, being created for holiday party season, it's a shade that likes to socialise.

since i wanted to make myself feel like i was going somewhere special, i also decided to try something i'd been thinking about for a while, which was using one of mac's crushed metal pigments as an eye liner. i'm pretty happy with the way this experiment went, actually. the shade showed as a true gold and it remained in place all day. i've opened a new door here. [also, i found that the pigment doesn't irritate my eyes when used as a liner, which is always a bonus.] there are a bunch of these pigments available with the mac holiday collection, if you've an interest in trying this experiment for yourself. or you could just use them as eye shadows like the man says you should. 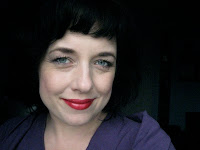 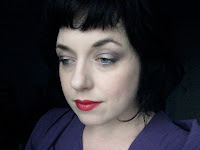 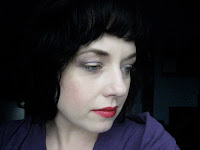 *suggested alternates :: circa plum = just hold tight, it'll be back in mac stores as part of the "daphne guinness" collection launching on boxing day!; crushed metal gold = mac gold pigment [a little less yellow]; amazon princess = mac "love thing" + mac "dollymix", although this one is still available on the canadian mac cosmetics web site and is worth picking up on its own

famous is currently available from chanel retailers and on line. it might not make you famous, but it will make you feel famous. and fabulous. which you should.