November 21, 2011
you didn't think i was running low on red lips, did you? you apparently don't know the depths of my obsession. sure, i get up every day and drink my coffee. [it's legally required, due to a small massacre the last time i tried to leave the house without caffeine in my system.] i go about my daily business. i try to get some writing done. i take care of the cats. but always, lurking somewhere in the back of my mind, is the idea that there's a lovely red lipstick that would be just perfect that i haven't found yet. yes, there's chanel's "dragon", the perfect bold primary red [although now i have to find a substitute for that too, thank you very much chanel marketing team], but what about other variants? for instance, i spent years searching for a very specific sort of red, something that still had the cache of a red lip, but that was a little deeper, more quiet refinement and less brash exuberance. the red that you notice observing the party from the corner, rather than the one dancing on the table and singing old vaudeville tunes. because sometimes, you don't want to be the one on the table. it can get exhausting.

now, there are lots of deep reds out there and i love many of them, but what i was going for wasn't the mature, classic type but something fresher, sexier, a little bit glossy, maybe not quite opaque, but with enough colour to stand up and get noticed when the time comes. and for a long time, i was convinced i must be the only person looking for that shade, because i didn't find anything like it anywhere. i wanted something between bold and vampy, but at a fairly specific point between the two. mac's "party line" is a lovely shade, but it was lighter than what i envisioned. likewise, "desire" [also by mac] was too dark and more purple. i was about to give up entirely [no i wasn't, but it sounds more dramatic that way] and that was when giorgio came to my rescue.


i'm already a fan of the rouge d'armani formula. it might even be my favourite lipstick formula, although i wouldn't say that in front of my guerlain rouge g's. every one of the rouge d'armani lipsticks that i have goes on evenly, feels creamy and moisturising on the lips, has a shine that lasts surprisingly long and colour that stays until you forcibly remove it. it doesn't feather or bleed and it comes in a sleek looking back metal tube that has a magnet closure to help keep the cap on when it's rattling around in your purse. about my only complaint would be that i find the colour range mostly kind of "safe", the sort of shades that you can find in a lot of places. so it's sometimes hard to justify the price point [about the same as chanel and yves st. laurent, but those two seem a little better at coming up with unique colours]. when they get it right, though, the result is unbeatable. so maybe i shouldn't be entirely surprised that it was them who finally united me with the shade i'd been looking for.

rouge d'armani #608 [not the sexiest name, i realise] is part of the "downtown" collection that came out as a bridge between their fall and holiday offerings. apparently, the products are all limited edition, which makes me want to throw a huge tantrum at my counter [except that they're also very nice to me], because i don't know how long my new hero and i will have together. our love is doomed to be a temporary thing, i guess. [i'd like to also mention that there are other shades in this collection that are very much worth picking up, but for the moment, i'm just sticking to #608.]

being a 600-series colour, it falls into the category of what armani calls "plums". there is something reminiscent of the skin of a ripe red plum, but i find that it runs cooler than most other red-plum variants [even ones like "party line", that i think of as fairly cool-toned to begin with]. it's a deeper shade, but the fact that it has a lot of shine and isn't 100% opaque [mostly, but not entirely] means that it doesn't have the drama of other reds. it's actually that thing that a lot of women swear doesn't exist: a red that makes a statement, but is still something you can wear in every day life. you might well get compliments on your absolutely gorgeous lips, but it's equally likely that it's not going to attract a lot of attention. it's a red that doesn't demand the spotlight. allow me to demonstrate: 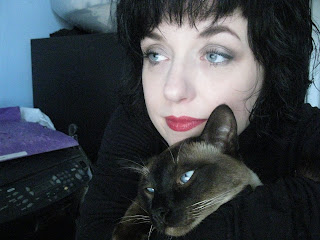 see? my lips weren't the only thing that you noticed in that photo were they? no. even though you're reading a post about red lipstick, i'm willing to bet there was something else that distracted your eye. try it again: 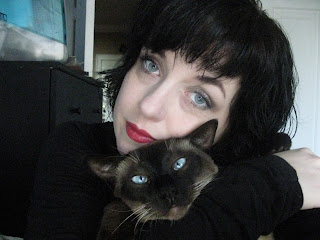 this red makes room for the rest of your life to happen around you.

i just adore how rouge d'armani lipsticks always apply perfectly to my cupid's bow, shaping my lips just right. [don't forget to look at the lips this time!] 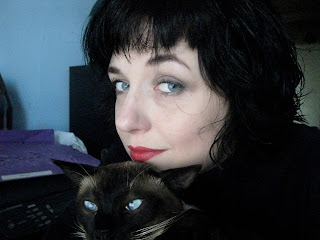 and it has a shine that lasts longer than any other formula i've tried. [try to focus on the lips.] 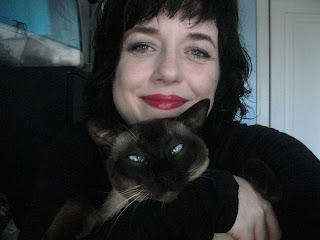 and yet, as beautiful as it is, it won't always be the object of everyone's attention. [last chance- check the lips!] 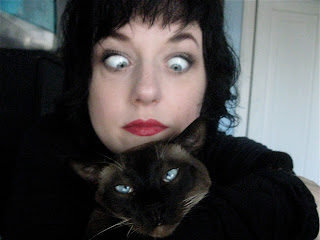 although it's a "tamer" red, i do still think that it looks lovely with a fairly neutral eye. in this case, i went with shades of taupe, that mystical meeting place between brown and grey [often visited by purple]. these shades are a couple of my all-time favourites, because they brighten my eyes and add some subtle sizzle to any look. [you can see them used to create a very soft smoky effect here.] i truly think that this is the sort of look that could go anywhere. [and, if you still think that the red is too bold, you could blot it down to a stain. rouge d'armanis are cool with you doing that.] 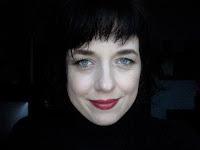 here's the rest of what i used for this look: 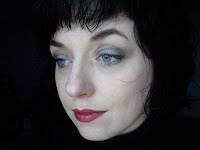 very important note [which is why i made it bold] :: looking at "photos" [photoshop representations] of rouge d'armani 608 on line, i've become aware that the armani beauty marketing department has, as we say in the industry "screwed up". the images used by on line retailers and on armani's web site portray this shade as a nude beige. it is not. it is the shade that i'm wearing in these photos, the cool, medium-deep plummy red of my dreams.

and of course, i would like to thank my co-star, hecubus. 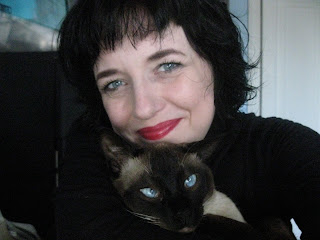