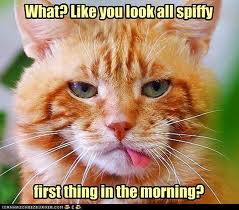 it's no secret that dom and i are big halloween fans, so it shouhld come as no surprise that dom won his office halloween costume contest this year, by going in as someone who had had a lobotomy. [pro tip: mac's "nightmoth" lip pencil apparently makes for an a-1 lobotomy scar.] the prize was two tickets to see a cfl playoff game with our hometown montreal alouettes that took place last sunday. dom is an als fan and i used to go to college games with my father, who used to write about them for local papers, so while neither of us comes close to what you'd think of as a "sports fan", we both know enough to make the experience enjoyable.

the problem with this was that it required me to be somewhere before noon on a sunday. i'm never a fast-moving animal in the morning. i seem to have retained the part of my ancient lizard brain that requires a long warm-up period before getting into action when i first awake and on the weekends, this becomes even more pronounced. i don't like to be rushed at the best of times and pushing me to move quickly on a november morning before i've had coffee is flat-out dangerous, which is probably why dom chose to remind me very quietly of the time as i was rising from the depths.

in order to make sure that we were on time and that i didn't feel rushed, i gave myself a challenge: i'd come up with a new entry for this series [meaning that it had to be something i felt comfortable posting on the internet] and i wasn't allowed to take more than five minutes to do my makeup. challenge accepted.

SEE THE RESULTS AFTER THE BREAK...

i think that one of the things that puts women off wearing makeup when they might want to is the added time it would mean to their morning routines. the fact is that a lot of us have ourselves timed pretty tightly, so that we can get maximum sleep and still arrive at our jobs on time and reasonably presentable. also, a lot of women just don't enjoy fussing around with their face so much in the mornings. and of course, it helps to have some tricks in your arsenal that will allow you to compensate for those times when you overslept, or spent too long drinking your coffee, or are just running late for any number of reasons. the rules i live by when i'm in a hurry are:

1. applying things with your fingers or with large brushes is easy and fast. anything that requires a more detailed touch- putting colour in the crease of your eyelid, blending shades- is going to take time. cream shadows and blushes [some of which can double as lip colours] are your friends. just remember to wipe your fingers off between products.

2. bold, simple colours look good on their own.

3. eye liner is the enemy. in a rush, you can swipe something along your water line, but lining your upper lash line is something you want to avoid. it will take time you don't have and chances are, it won't go the way you want it to.

so for this day, i chose to wear "gesina", a mac cosmetics colour from their 2010 "couture collection" [done in collaboration with designer marcel wanders]. it's a bright, punchy pinky-red with a semi-glossy finish [that becomes less apparent over time]. because it's opaque in a single pass and has lovely, even coverage, it's a perfect selection when you're in a hurry. it also lasts for hours, which is nice when you don't want to be fussing with your face during the day.

unfortunately, gesina was a limited edition colour and isn't available any longer from mac, but you can still find it sometimes on ebay and through online cosmetic clearance houses. about the closest thing currently available is chanel's newly launched "la fascinante", which is decidedly more muted, pinker and has a more matte finish.

having decided on a nice red lip. everything else was kept super-simple. with a shade like "gesina" you don't want to have anything else compete for attention. i used a cream shadow, one of mac's paint pots with just a few pats of a slightly darker powder shadow on the outer corners to give some dimension. i did choose to use a liner on my water line, something to brighten my dull, caffeine-deprived eyes. a couple of sweeps of bronzing blush [helps me look alive, even when i'm not] and voilà: a full face in five minutes.

here are the details of what i used: 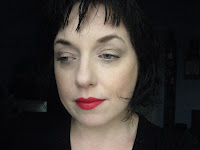 eyes ::
mac paint pot "vintage selection"* [warm peachy nude with shimmer]
mac e/s "patina" [gilded taupe- a shade that pretty much everyone should have. it's incredibly versatile, universally flattering and surprisingly difficult to duplicate]
mac eye kohl "i get no kick"* [champagne nude] 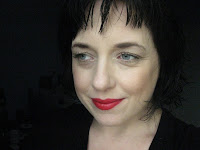 and here's an image of us enjoying dom's prize tickets. unfortunately, we were not a good luck charm and montreal lost in overtime. 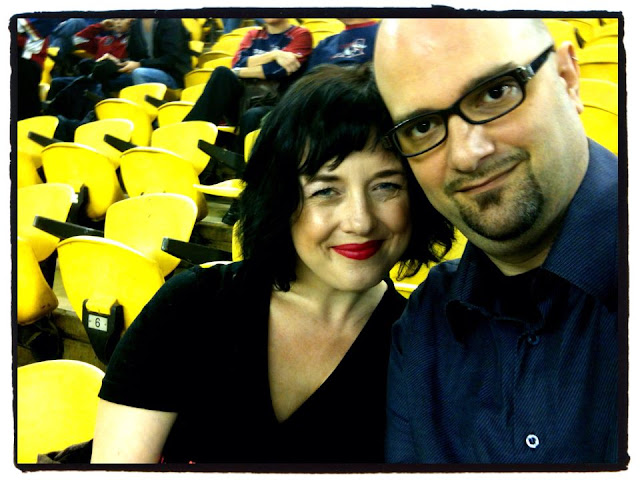