November 15, 2011
contrary to popular belief and contrary to what you might have thought from the first two posts in this series, you do not need to be intimidated by red lips. although red is associated with bold, passionate, seductive colours, the fact is that, like every other colour in the spectrum, it can be bright or subdued depending on the intensity of the pigment. eyeball-warping tones are no more prevalent in reds than they are in any other colour, it's just that the brights have come to dominate in the popular imagination.

i admit, i haven't been helping to dispel that myth. the first couple of reds i've featured have been balls-to-the-wall, all-or-nothing reds that kick ass and take names, but that doesn't mean that i don't occasionally enjoy a more muted tone myself. after all, as a die-hard red lip fan, sometimes you want the ambiance, but at a lower volume. fortunately, there are lots of options out there and, while they might not get the attention of their louder, more flamboyant cousins, but they still have their own, quiet, smoldering appeal.

i've noticed in the last year that these sorts of shades seem to come naturally to yves st. laurent. while chanel may own the cardinal reds, ysl has developed a nice little stable of understated, extremely wearable red shades, particularly in their "rouge pur couture" line. [and there are more shades being added all the time; apparently the entire "rouge pur" line will eventually be replaced by their "couture" companions, which are, indeed, superior in formulation.] st. laurent, of course, does have some outspoken reds, but they also have something to offer for those who don't quite want to jump into the red kool-aid pool.

one of the nicest examples of this is rouge pur couture #4 "rouge vermillion", which is a cool, antiqued raspberry shade, meaning something on the pink side of red, but with enough warmth that it hasn't crossed the red-pink boundary entirely. i originally looked at this shade as a replacement for my sadly departed "mystic" from mac, but it's softer and cooler than that. it has a slightly dusty quality to it, like the bloom on a grape, or like a tapestry that's been exposed to too much sunlight. it's somewhat faded without looking washed out, a rare sort of quality.

because it's not aggressively bold, i find that "rouge vermillion" can go anywhere [and looks very classy wherever it goes]. it's not going to call too much attention to itself, but the lush formula deposits enough creamy pigment that your lips feel like they're royalty. sort of the best of both worlds.

since i first tried it, i've fallen quite in love with the rouge pur couture formula. it's everything a lipstick lover could want- rich and opaque without being heavy, it applies perfectly and has decent lasting power. the shade range is still somewhat limited, but the shades they do have are excellent and, as i mentioned, they keep adding more. about the only drawback, and i'll let you decide how much this is going to bother you, is the packaging. it looks lovely- little ornate gold tubes with filigree details, but the plastic that's used to construct them is dirt-cheap and scuffs if you speak too loudly in its vicinity. touching is completely out of the question. if i look at their closest price competitors, chanel and armani, both have very sleek, sexy black packaging that you can carry in your purse without causing permanent damage. in fact, brands like mac and inglot, which are much cheaper, have packaging that's more durable. i wish they'd skipped the delicate embellishments and concentrated on something that didn't look and feel so cheap [because they're not cheap].

even i'll admit, though, i'm not put off enough by the packaging to deprive myself of lovely lips.

here's a look at "rouge vermillion" in the wild. 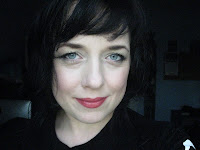 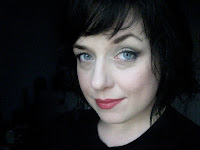 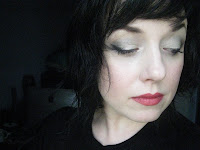 *suggested alternates :: lady grey = nars april fools [green side; lighter and more shimmery; this was actually a very tricky colour to match, because grey-greens are surprisingly uncommon. "lady grey" and hazy day" are actually still available from mac if you'd like to get the original]; hazy day = inglot #444 [darker, but a closer match than i found for "lady grey"]; perfect topping = guerlain meteorites beige tint