November 14, 2011
usually, i try to mix up topics on the blog from one post to another, but i'm surprisingly rant-free today, so i decided to just post my second installment of my red lip spectacular. since we started with something darker and cooler-toned i figured i'd go to another red "extreme" for the second post and feature hourglass' "raven".

i reviewed this shade originally here back when i first purchased it. that was at the beginning of the warmer season and, while it's a thrilling colour at any time of year, i do think that it's particularly great lipstick for fall and winter. it's actually not so much to do with the colour itself, but the extremely rich, emollient formula feels a little heavy on lips in hot weather, whereas it feels comforting when the mercury begins its descent. [i also find that it's a little less prone to bleeding in cooler weather, although i'd still recommend the use of a lip liner to avoid that "blanche dubois depending on the kindness of strangers" look.]

this is the kind of statement red that seems like it might be unwearable. it's fierce-looking in the tube and, if anything, slightly more so on the lips. you can forget about not getting noticed when you're wearing "raven", because even blotted to a stain, it has an impact. [side note :: did you notice that i said it "has an impact" rather than "it is impactful"? do you know why i did that? because "impactful" is not a fucking word, o.k.? are we clear? i'm consistently astonished/ infuriated at how many people use that term. and i'm not talking about those whose first language isn't english- i know there are several who read this blog. i'm talking about those of you who are educated enough to know better. although those people probably don't read this blog. moving on...]

1. look in a mirror :: if your skin seems more yellow/ olive and you've ruled out jaundice, congratulations, you're warm-toned. if your skin seems pink and it isn't a rash or fever, that means you're cool [skin-tone wise; and fyi, if you have jaundice, a high fever or a rash, you should probably step away from the internet and see a doctor.]

sometimes, the mirror test is a little tricky, particularly if the walls surrounding your mirror are any colour other than pure, neutral white. [the colour will reflect on your skin and make you appear closer to the tone of the paint.] in that case, you can

FURTHER SECRETS OF THE ELUSIVE "PERFECT" RED AFTER THE BREAK


2. look at the inside of your arm, specifically at the veins. on a warm-toned person, the veins will appear more green, on a cool-toned person, more blue. [you'll want to make sure you have a good source of natural light- also known as a window- when you do this, since it's not like your veins are super-bright. at least i hope for your sake they're not.]

that's a pretty good test, in general, but i remember when i did it, i had an exquisitely frustrating response. the veins on the inside of my arm are teal. they're neither green nor blue, but something kind of in between. and i wouldn't have cared so much, but no one wants to lose a battle of wits with their own skin and so i moved onto what we'll call the "psychological" part of the test, which is

3. look in your closet. without you knowing it, your brain is aware of what colours look good on your body and it will command your wallet to purchase things that are most likely to improve your appearance. it's a modern update to the whole lizard-brain must-find-mate apparatus. your brain wants to make you visually appealing. [unless your brain is telling you to buy ugg boots, in which case you should stop cleaning your ears with the corkscrew.] if you have mostly cooler colours in your closet, you're probably cooler-toned. and if you have mostly warmer colours... you get the idea. the more of a mix you have, chances are the closer to neutral your skin tone is, meaning that whether a colour is warm or cool is less likely to be an issue. if you're a goth and everything in your closet is black... do you seriously want a bright red lipstick? you do? ok, fine then...

4. look at other lipsticks in your collection. are they warm or cool? it's the same test as above, just applied to lipstick. if you don't have any other lipsticks, red really shouldn't be your first purchase. it'll be jarring to go from nothing to five-alarm and that will make you feel self-conscious.


now, having said all that, here's an evil little secret that thousands of elves who write articles every year around this time on how to find the one, singular, indisputably perfect red want to hide from you: red is actually one of the most forgiving lip colours in terms of warm vs. cool. as the primary colour that sits exactly on the balance point between warm and cool, even when it strays to one side, it still maintains a kind of neutrality. chances are you can actually wear lots of reds. it is possible to go horribly wrong, but big mistakes are often caused by what you put around the lipstick [bright/ harsh eye makeup, wearing red clothing, etc.] than by the lipstick itself. sure, if you have only $10 to your name and absolutely have to make the perfect selection, you'll want to be pretty careful. but can i suggest that if you have only $10 to your name that perhaps lipstick shouldn't be a priority?

the fact that i adore "raven" so is a great example. my skin tone is almost neutral, but tends a little cool. "raven" is about as warm a red as you can get without actually becoming orange, but i really like how it looks on my skin. since it is such a contrast, it tends to balance the cooler tones i have and make the bright lips against pale skin effect that much more pronounced. it's an experiment that could have gone terribly wrong, but in the end, my red-lip fairytale had a happy ending.

in order to avoid creating more confusion with the warm/ cool dynamic, i like to keep everything else fairly neutral. nothing you wear is going to compete with the awesome power of the "raven" and you shouldn't try. it's an obvious headliner, a real diva colour and it is not a beginner's red. it's the sort of training-wheels-off shade that requires comfort and confidence. unless you're replete with both, you'll probably want to work your way up to it. at the very least, you'll want to be certain you'll love it [as i do] because hourglass lipsticks are not cheap.

for my part, wearing this makes me feel like a rockstar and every time i don it, i have complete strangers complementing me. it's the sort of lipstick that begs a reaction. i'll continue to buy reds, of course, because i love them and i've determined that a girl can never have too many, but do i think i'll ever find a warm red as luscious, intense and powerful as this one? nevermore.

you can find another look i did with "raven" by clicking the link to the original review [above]; here's this week's. 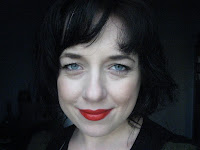 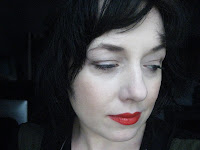 mac pigment "copper" [would it surprise you to know it's copper? it has an incredible texture and finish, so it looks like actual metal. any "metallic" finish pigments from mac- permanent at pro locations- are worth the money.]
mac superslick liquid liner "on the hunt" [black]
benefit they're real mascara 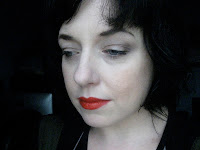 anahdara said…
great post! i also love how this lipstick looks on you!
i kind of think i have a neutral skintone or something. strangely though, eyeshadows that are too cool are often very blah on me, and lip colours that are too warm (eg coral) ditto.
as for reds, they generally look good...strangely everyone's fave chanel dragon does not...is raven a lot brighter/warmer?
9:28 PM

morelikespace said…
Glad you enjoyed it! I always think that finding good colour matches is a lot more specific than just "warm" or "cool". For instance, cool colours usually work on me, but I have to be careful with blue shades, because they can call attention to under-eye circles (which I frequently have).

Raven is definitely warmer and brighter than Dragon. I'll probably be doing a "Dragon" post later in this series, but if you'd like a photo to compare, there's one in this post: