November 10, 2011
other than mac, benefit cosmetics was one of the first companies to really pique my interest in the beauty industry. their irreverent modern-day glamour girl imagery and innovative products were right up my alley and i would always eagerly try out their newest releases because it was nice to think that someone else noticed that cosmetics should be fun. i also really appreciate the fact that when i was contacting beauty companies to find out their policies on animal testing, benefit's customer service sent me back a thoughtful, detailed response. [they're fur-baby friendly.]

unfortunately, over the years, my benefit experiences have been problematic. i absolutely loved their "high beam" highlighting liquid, which gives a white-pink radiance to skin, but on me, i found that it emphasised my pores unless i applied it in very specific areas, buffed it out, worked some foundation around it... basically spent way too much time for any cosmetic product. [i'm a firm believer that if you have to fidget a lot with a beauty to make it work, it's not worth the bother.]

i initially fell in love with their pore-refining, skin-smoothing beauty balm "dr. feelgood", which had enough of an effect on my skin that i could wear it instead of foundation, but it started to clog my pores and give me breakouts in short order. i've mostly avoided their new skin care line out of fears of the same reaction- it's very heavily perfumed and [aside from the fact that i dislike the artificial scent] that's almost always a huge no-no for me.

i've heard wonderful things about their concealing products, but virtually all of them are too dark to work on me.

although i always felt that colour cosmetics were a bit of a weak spot for the brand, i gave their lipsticks a try earlier this year, because i found a shade that was a perfect cool my-lips-but-better pink, something i'd not found anywhere else. my feelings were mixed, but i will say that i've grown fonder of the colour and more forgiving of the issues with the formula in the months since i've written that review. and i find that the issues i had with their cult favourite "creaseless cream" shadows are considerably lessened in cooler weather. [and i'll repeat- i am not a cream shadow girl. aside from mac's paint pots, the creaseless creams are pretty much the only ones that don't make me want to cut my eyelids off.]

the two areas in which i feel that benefit has always excelled are in those neglected areas of the beauty regimen, mascara and blush. they're "bad gal" mascara was the only one i wore for years and i have to say that most mascaras from prestige brands don't measure up to it. and i've always loved their shimmery little boxes of blush in an surprisingly universal shades. so i'm always going to be pretty open to trying their new entrants in this market.

i had planned to buy another tube of "bad gal" when i got sucked into trying the cheekily-named "they're real!", the brand new mascara benefit launched this summer. since i'd been using the over-hyped diorshow mascara previously, i felt that even a lesser benefit product would likely be an improvement. and it is.

at first, i had a little bit of trepidation, because the extraordinarily hard plastic brush had a tendency to clump my lashes together and make them appear spiky. however, as i've used the product on a daily basis, this tendency has disappeared and now it just gives me a nice black fringe with excellent separation. the mascara is better for defining and lengthening than giving volume ["bad gal" gives both, but is probably better for volume, if you want a point of differentiation- you can also look here]. where "they're real" stood out to me, though, was in the curl i noticed. now, my lashes are already pretty curled, so it's not something i've ever looked for, because i don't want to accidentally flip them so that they're pointed towards my eyeballs. however, if it's curl you want, this is the best formula i've ever found.

although it's not as dark as "bad gal", i still found it deeper than a lot of other mascaras on the market. and i really like the fact that it doesn't get crusty/ flaky after a few hours wear. it maintains very well, to the point where it's proved a wee bit challenging to remove at the end of the day, but given the choice between a mascara that checks out by mid-afternoon and a few extra minutes of washing my face, i'll take the latter.

at the same time, i tried out a new shade [for me] of benefit blush, the "3-d effect" blush that supposedly sculpts and defines features. i can't say i noticed my face being any more 3-d than usual, but this is a gorgeous, fruity coral-pink shade with a lovely shimmer that makes cheeks glow like you just received the greatest compliment of your life. it has plenty of colour payoff, so it would show up on darker complexions, but it works fine on pale ladies too, as long as you're careful to use a light hand. 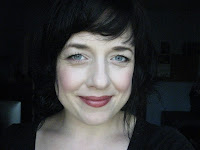 so here's the details on a look i did to take my new benefit goodies out on the town. it's a sort of a subtle autumnal look, more appropriate for daytime wear than a full-on vampy lip or smoky eye, certainly more appropriate for a stuffy office atmosphere. and sometimes, i just like to try out a look that isn't dramatic, just for laughs. 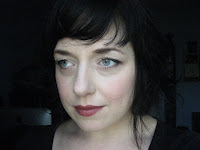 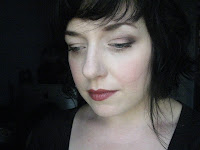 Biba said…
I got the the sample size of Bella Bamba the other day and I just love the colour too.
5:16 AM

morelikespace said…
It's great and I really do believe it is that elusive thing- a blush that works on almost every skin tone.
6:16 PM