if you ask me [and you probably shouldn't]

November 17, 2011
i think it's reasonably clear to readers of this blog that i've been following the republican presidential nomination campaign. i'm doing this not out of any sense of masochism, but because i truly think it's the most hilarious thing on television since arrested development left the air. things won't be nearly so entertaining when there's only one of these guys left and actual power is at stake.

i can't say who i'd vote for among the current field if i were a republican, because i can't really imagine who i'd be if i were a republican. if someone told me that i could ensure that all the world's cats would be treated like royalty in perpetuity if i voted for one of the republican candidates, i have a good idea who that candidate would be, but i think that's unlikely because 1. that's a lot of cats; and 2. i'm not american, so i can't vote anyway.

that said, we're on the eve of one more in the 1,001 debates that all the candidates are participating in [ahem, mitt romney is still tbc for this one], one hosted by fox news contributor and [apparently] "america's favourite pollster", this guy: 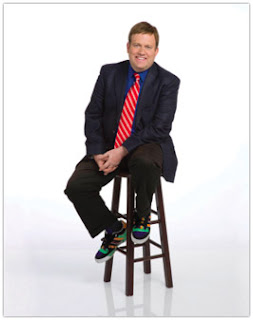 and this one is a special "family centred" debate, so you just know everyone is going to try to moral-high-road everyone else... so i thought i would pass on my sage advice to each of the candidates. and i'm kind of serious. kind of.

michele bachmann :: you remember that first debate, where everyone thought you were going to embarrass yourself and it turned out you were actually pretty on the ball? yeah, neither does anyone else, including the good folk in iowa who handed you that early straw poll victory that made us all momentarily take you seriously. i know you think that you got shafted in the last debate because you barely got a word in edgewise, but did you also know that it was one of your strongest performances? you looked classy, you made a few decent points and you didn't get to talk so long that your inner dingbat took over the spotlight. think about that. [and, woman-to-woman, you should ditch the false lashes. i feel like i'm watching an injured bird try to take off when you blink.]

herman cain :: your fifteen minutes are over. you know it. i know it. toothless hillbillies in west virginia who live in villages where there's one last name know it. so who cares? you've done better than anyone thought you would, you're probably looking at a lifetime of paternity suits once your campaign ends. enjoy yourself, sir. and by the way, i think it would be the best political moment in history if you were to find a way to respond to a question on libya by singing the following song. you can make up your own lyrics, too.

WHAT'S MY ADVICE FOR THE REST OF THE GANG?

newt gingrich :: sir, my hat is off to you. everyone knows that you're a hypocrite- that you were cheating on your wife while trying to impeach bill clinton for doing the same, that you were accepting huge sums to advise freddie mac and apparently forgot to advise them not to ruin the economy- but barely a week out of the gate, people were writing your candidacy off as a joke and now you're in a statistical dead heat for the lead with mitt romney. how have you done this? as far as i can tell, by combining pompous rhetoric with some well-timed zingers in debates. and by knowing just a little bit more about politics and history than your opponents which admittedly, isn't a tall order. i kind of suspect that you're actually running as a possible vice president and that no one will shit larger bricks than you if you end up as the republican presidential candidate, but in the meantime, mr. speaker, you can thumb your nose and tell us all to kiss your bloated ass because you were right and the media and the rest of us were wrong. you might as well keep doing what you're doing, because it's obviously working.


john huntsman :: i'd just like you to know that every time you open your mouth at a debate, i want to bite my fingernails. everyone says that you're an exact clone of mitt romney, being a photogenic mormon former governor in the moderate mold, but i know better. you scare me, because you're what mitt romney would be if he were really smart and well-informed and i think you'd have a decent shot at taking obama in a general election, which i don't want you to do. unfortunately, i think that's just going to have to be our little secret, because you're riding a steady 1.3% in polls and going nowhere. might i suggest you pay someone to spread rumours that you have a stable of sex slaves or that you believe you were kidnapped by aliens? crazy seems to work in this race. [fyi, loved the plum suit-magenta tie combination at the last debate, but i'm afraid that's not crazy enough.]

ron paul :: i really love your bluntness. every time you talk about foreign affairs and about what al-qaeda was really angry about, i swoon just a little to the right, because, in america no one says that shit and lives [unless they're a comedian, and they're all going to hell anyway]. no amount of booing will stop you. sure, when you start talking about economics, i feel my blood freeze, but i have to hand it to you, you are morally consistent and i kind of respect that. republicans don't respect that, though and i think it's time you clued into that and just ran as a libertarian, which is what you actually are. and you also have to start buying suits that fit you, because you always seem to look like you just strolled in from a talking heads video shoot.


rick perry :: you know it's bad when people compare you to george w. bush by saying that bush was the "smart texas governor". you were on the road to the white house until you started to talk and, as much as i would really love to see you debate barack obama, we both know that's not going to happen. you have nothing to lose. you sent yourself up on letterman, joked amiably about your "oops" at the last debate and you know perfectly well that you probably have a future as a fox news contributor. why so serious? you're not going anywhere but down in the polls, so live it up a little. i will never agree with you and i will probably never like you, but i will have some little bit of respect for you if you show up at the next debate with a 40oz of bourbon and a shot glass and proceed to get loaded. what's the worst that could happen?


mitt romney :: you're number one. i don't know why, no one in your party knows why, but you've been number one since the beginning and we all know that the race is yours to lose. fortunately, none of the other candidates seem that interested in taking that prize away from you and have instead set themselves to work at destroying their own campaigns. all you've had to do is sort of stand still, give that square-jawed smile and throw out a few platitudes from time to time. which is good, because i'm starting to suspect that that's all you can do. you've developed this tendency to bristle when people ask you questions about any policy specifics, which doesn't look great, but next to the others on the dais with you [other than john huntsman], it doesn't look that bad, so no one seems to notice. sure, three-quarters of republicans don't want you as their nominee, but that doesn't seem to be hurting you any. carry on.

rick santorum :: are you still here? ugh. i'll say it. you are my least favourite person in this race. you are a dangerous, mean-spirited, sanctimonious creep. you're still doing better than john huntsman, which says a lot about your party.

StephanieC said…
ahhahaha, I could not articulate what was odd about Michelle Bachman blinking, but that summed it up perfectly!!!

I feel my own lids get heavy.

Maybe she is doing the bridal thing and is just preventitively avoiding mascara smears if she cries.

morelikespace said…
Rather than breaking down in tears, I think I'd actually like to see her lay an eyelid smack-down on the other guys live on national t.v. I mean, she's probably got superhuman eyelid strength by now.
12:07 AM