the hypothetical situation room [movie review :: the ides of march] 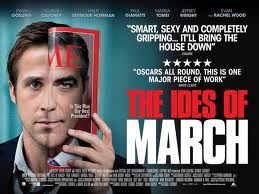 when i first went to see oliver stone's "nixon" in the theatre, i remember that the audience consisted almost entirely of people i already knew through the various levels of political junkiedom that existed in my life and in the lives of my family members. at the end, when we were sharing our thoughts, one person opined that maybe people like us weren't really the target audience. my father's best friend, a plain-spoken journalist with many years experience shrugged and said "but if we don't like it, who will?"

that line sticks with me every time i see a film that deals intimately with the political process. such films will always have as their base audience a group of people who watch hours of news network coverage on three different channels every day, who tune into any televised debate they hear of, who scour through polling numbers like an emergency room doctor tracking vital signs. it's a hard demographic, because they have the attention to detail of the most obsessed sci-fi or comic book geek, but their attention cannot be distracted through spectacle. [which is probably why people don't make gritty, realistic movies about the political process very often.]

taking into consideration that "the ides of march" is a movie made for the already politically inclined, and that i count myself among them [hence going to see "nixon" in the theatre], my very first reaction was that this film stumbles literally in its first words. within its first sentence, the script immediately demands that we suspend our disbelief and that we allow ourselves to be convinced that the film is set in some magical america where an avowed atheist is the lead candidate in a democratic nomination race. say what?

normally, suspension of disbelief isn't a big deal, but the people who are going to flock to a gritty, realistic political suspense film are fact-addicts and a lot of them are going to balk at that initial creative flourish. there are other examples sprinkled throughout the script of the candidate's politics- the politics of director george clooney who, coincidentally enough, plays the politician in question- which will cause eyebrows to raise and audience members to wonder who outside the state of california would ever vote for this guy. and he's supposedly campaigning in ohio and north carolina. for a story that requires the viewer to believe in the potential reality of the story, it's a lot to ask.

our porte-parole for the story is steven [ryan gosling, who has apparently decided to follow in clooney's footsteps as the gorgeous, talented guy you kind of want to hate], the young hotness who's risen like a perfect, sexy-scented soap bubble to a senior position in the clooney campaign. although he believes that his guy can change the world, he's by no means what you'd call an idealist. he's media-savvy, poker-faced, the pride of his boss [philip seymour hoffman] and an object of professional lust for the manager of the opposing campaign [paul giamatti]. an inspiring candidate, a young believer with political skills, a seasoned group of campaign experts- it's a story that has a lot of promise if it can avoid the obvious cliches [which it generally does]. of course, it would be a lot more exciting if mike nichols hadn't done it admirably in 1995 with his criminally under-rated adaptation of "primary colours". i found myself running a non-stop comparison between the two in my head for virtually every minute of "the ides of march" and i have to say that clooney's film generally came up on the losing end of the competition.

"the ides of march" is an adaptation of co-writer beau willimon's play "farragut north" and it shows its roots. watching each scene unfold is like watching an english premiere league set piece- even when it's beautifully, flawlessly executed, something in your mind tips you off to the fact that it's rehearsed. the action is confined, a hallmark of the theatre, but the sort of thing that film can easily be overcome. in a lot of films, it wouldn't be a big deal, because telescoping the action allows the audience to concentrate, but again, those who've worked campaigns in any capacity will be all too aware that this sort of measured pace just doesn't happen.

the greatest strengths of "the ides of march"- and believe me, it has strengths- actually have nothing to do with its political elements. the people who i think would be able to admire it the most are other filmmakers. it's beautiful to behold. clooney's eye is uncanny and he suffuses the film in an almost noir look other than the bits we get to see of the candidates on television. it subtly reinforces the dynamic of the brilliantly lit public face versus the shadowy world of the back rooms. it's hard to believe that anything could be so pretty as to compete with clooney and gosling on screen, but it is.

the real high point here, though, is the acting. to be fair, i think i'd probably go see philip seymour hoffman and paul giamatti do a dry read of the screenplay of "showgirls" if the opportunity presented itself. they are two of the most sophisticated, nuanced, capable actors working in america today and i'd be surprised if they let down the side. they don't. both are superb in their different ways. hoffman is the most believable thing in the film. he looks, sounds, behaves exactly like the campaign spokesmen we see every night. there is no moment when he isn't completely compelling. giamatti, set up from the first moments of the film as the "villain", is equally admirable and manages to take the script's heaviest-handed moments and make them sing.

what's surprising [maybe?] is that gosling is right there with them. his sang-froid is uncanny but never despicable. although you might never grow to love him, he does elicit enough of a sympathetic response to keep you interested in what happens to him. without a performance this solid at its core, "the ides of march" [so help me, if i type "the ideas of march" one more time, i'm going to break my own fingers] would spiral into forgettable territory. he holds it together, supported by hoffman and giamatti and makes it an entertaining ride. [on a related note, i'm sad to say that the women of the film don't fare nearly so well, either being severely outclassed [marisa tomei with glasses, to lend her more gravitas] or unremarkable [evan rachel wood]. unfortunately, the lack of meaty women's roles is still probably reflective of the world of politics too.]

overall, i'm not surprised that critics love "the ideas of march" [that's it, the fingers are doomed]. it's a film person's movie. i'll be surprised if audiences- either a general audience, who will likely be befuddled or put off by the political machinations [which may confirm the average person's worst fears about political campaigns] or by the hyper-picky target audience who will find too many holes for their liking. in both cases, i believe the reaction will be the same- it has its elegance and beauty, but falls somewhat short of satisfying.

"the ides of march" is now playing.