the coolest of yule

November 28, 2011
i normally give myself until the first of december before i get so sick of tacky interpretations of holiday songs and phony seasonal cheer before i start to worry about the dangers of an aneurysm, but every few years i seem to get a reprieve and find some way not to have the season spoiled by crass consumerism and treacly imitations of sentiment.

the fact is, i actually really enjoy some seasonal traditions. i wish that the telling of ghost stories at this time of year was something that was more popular. and i love the idea of gathering those close to you for a great feast. in fact, i love being the feast cook and it's something i look forward to every year. i even like the tradition of decorating the house with lights- although some make it overwhelmingly tacky- a sign of resilience in the face of the darkest part of the year. the scent of evergreen boughs and of a fire in the hearth- these are all things that i like. it's the more modernised aspects of the holiday, as well as the disproportionate emphasis on family obligation [as opposed to spending time with those we care about, which can be quite different] that i find depressing and infuriating in equal measure.

however, it's nice to know that there are still things to look forward to. like the holiday season window display at ogilvy's department store in downtown montreal. the store has a long heritage, mostly as the destination of choice among montreal's patrician anglophones, and certainly continues to attract a well-heeled clientele [as well as some of us who sneak in when no one's looking]. every year, they have an elaborate window display with a variety of adorable animal models- many of which move- in a rustic setting that never fails to remind me of the sort of images the holidays conjured up in my mind before i became jaded.

i snapped a few shots of this year's display [they're always somewhat similar but subtly different] the other day. unfortunately, it doesn't capture the movement and ogilvy's keeps their damn windows so clean that there's reflections all over the place, but i think that it does give an idea of the panorama.

these guys kind of rotate and dance... 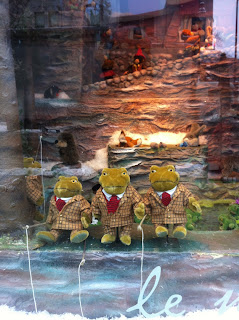 fox and hare, playing a game of peek-a-boo 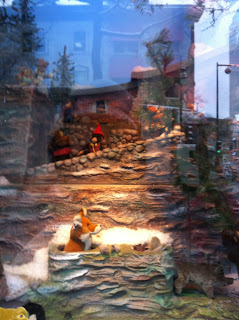 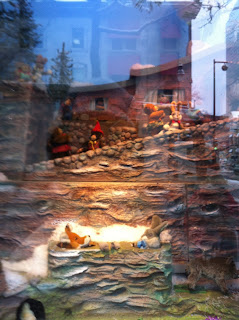 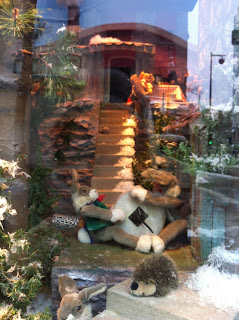 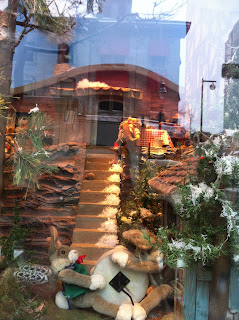 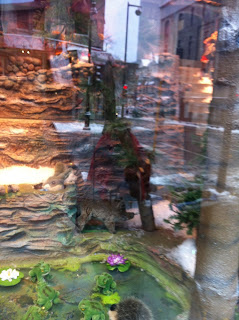 bunny rides this like a ferris wheel. which kind of rocks as a job, as far as i'm concerned. 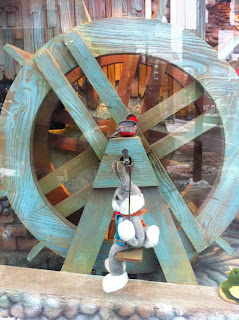 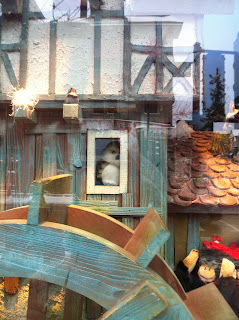 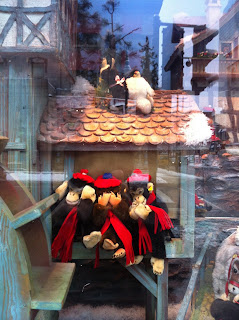 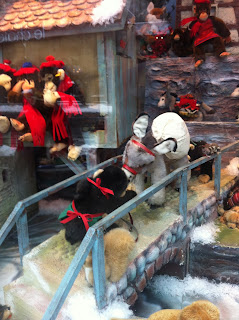 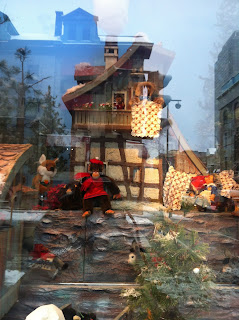 ok, it kind of looks like the fantastic mr. fox is taking a leak, but that's not the case... 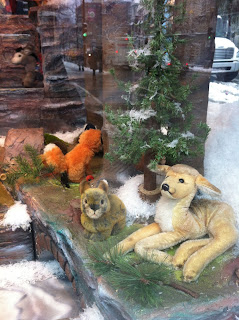 don't miss the "wraparound"! this shot is taken from the side of the building,  where there are some different critters. 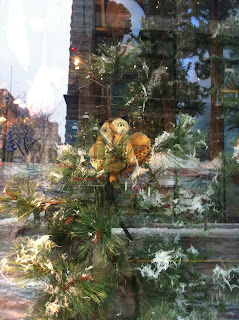 there are rumblings in montreal that ogilvys' future may be uncertain. holt renfrew, the national luxury department store chain, operates a similar store a few blocks to the north and both retailers are owned by selfridge's, a british retail company who are likely smart enough to realise that they're doubling their expenses by operating the two principle competitors in montreal's high-end retail landscape. there are rumours bubbling that holt's may be interested in moving into the larger and better-located ogilvy's location at some point in the near future.

as a consumer, i'm a little uncomfortable with this. ogilvy's has certain brands that holt's doesn't and i'm unclear what would happen to those. [i'm mostly thinking of serge lutens and l'artisan parfumeur, both of whom operate divine-smelling counters at ogilvy's and nowhere else. and yes, that is completely selfish on my part.]

on the other hand, the holt's space is still impressive- located between the ritz-carlton hotel [and, in the near future, condos] and the museum of fine art and it's about the only retail space i can think of that would finally allow sephora [whose canadian head office is only a few blocks away] to open a long-overdue flagship store in downtown montreal.

as a montrealer, though, i do find something venerable about ogilvy's. yes, it is a clear testament to the old westmount guard, a playground of the wealthy who took advantage of the francophone majority in the province up until the 1960s. but when i look at their holiday window display, it's difficult for me to see anything but whimsy and charm, enough to convert even a bitter old humbug like me.

whatever happens, and i suspect that business will dictate that the holt's-ogilvy's merger move forward- i do hope that whoever occupies that space on the corner of ste-catherine and de la montagne has enough respect for tradition to keep the holiday window alive, or else i really will lose any remaining vestige of seasonal spirit.