making faces :: vamping it up with tom ford

October 30, 2011
a few days ago, when i realised that i didn't have a good photo of me wearing tom ford's "black orchid", one of my favourite vampy lipsticks, i did promise that i'd take care of that little detail. subconsciously, i think this was because i couldn't wait to do a look with this sinfully rich, deep colour so close to halloween. i'm assuming it worked, because when i wore this on friday, i kept having people ooh and ahh over my lips [more so than they do normally, haha].

i'm guessing that at least part of that is because it's just such a bold contrast to the colour of my skin, but that's one of the reasons i like really dark shades- that shock effect you get. i will say that, aside from the contrast, this is a particularly lovely colour. when i first saw it, i thought it was a deep brown. then it looked plummy. and sometimes it looks red. really, there are elements of red, purple and brown at work and which you notice most will depend very much on the light and what colours you're wearing with it. [since i tend to wear most things with black, it theoretically removes a variable, but i still find that it looks a little different on me each time i trot it out.]

GET DETAILS ON THE WHOLE LOOK...

as with a lot of "decadent" [that's my new self-justifying term for "expensive"] lipsticks, the formula is rich and creamy, but doesn't feel at all heavy on the lips. it has a bit of sheen, which makes it a little less intimidating to look at than a matte lipstick in the same colour range ["the black holes"]. unlike a lot of dark shades, it applies very evenly right out of the tube, which is great for us lazy vampires who don't want to reach for our brushes. i do find that my lips feel a little dry after a few hours of wear, although touching up the colour tends to combat that. i haven't read of anyone else having that reaction, so it could just be me. [i have the same issue with chanel's rouge allure lipsticks, which everyone else swears are moisturising, whereas i find the chanel rouge coco formula easier to wear, which everyone else says is a touch drying. my lips are very rebellious.]

being into dark lips is kind of like being into a very specific niche of music. no matter how much you appreciate it, you're going to have a lot of people insisting it's all basically the same. for people who don't like this sort of look, one shade is going to look pretty much like another. however, if you are a fan, i will say that this is a pretty unique shade. mac "tribalist" is darker and more purple, mac "dark deed" is close, but a bit pinker [both of those shades are discontinued, but can be found from time to time on line]. yves st. laurent rouge pur couture #18 [noir laque] is the closest i could come up with, but it's noticeably darker and, again, more purple. [i also found that it applied less evenly.]

price-wise, tom ford lipsticks will set you back about the same as a guerlain rouge g. i don't know if i love the formula as much as that, but guerlain doesn't have anything close to this colour available. [in general, there is something decidedly saucy and wild about a lot ford's lip colours and "black orchid" is just one facet of that.]

anyway, i've prattled enough. this is really just a lengthy justification for doing another halloween-tinged look... 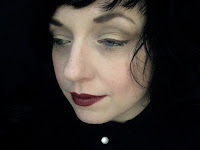 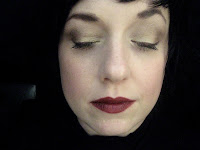 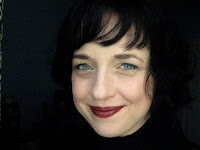 i'd also like to point out that i've had my "magically cool liquid powder" for a year. it is a lovely highlighter that creates a soft glow on the skin, but the really exciting thing about it is actually putting it on. although it's clearly a loose powder, it feels like you're putting cool water on your skin. i tortured dom with this when i first got it, because if you're not expecting the sensation, it is, apparently, completely freaky. unfortunately, as it ages, this effect disappears. so now, it's a nice highlighter, but it's no longer cool or liquid-like, which sort of removes the magic. now it's just powder. time to get a new one, i think.

morelikespace said…
Thanks very much! I love that he included this shade in his original selection and that it made the cut to be part of the final offering now that he's launched his whole line.
9:04 PM