in search of halloween 2

October 19, 2011
well nothing halloween-related ever goes without a sequel, right? on today's stroll, i have to say there was a noted increase in halloween, even compared to a couple of days ago. montrealers are freakin' serious about this stuff, people. i do think that i'm going to have scoured most of the neighbourhood soon, so i'll have to branch out, but i somehow don't think that's going to be a problem.

i have to say that i was expecting to have more of a negative reaction to running up and taking snapshots of people's houses [see below for more on that], but most folks seem unruffled. in fact, the only person who talked to me while i was out today was a guy who told me he'd locked himself on his balcony and could i please go in the front door and let him in. [on an only slightly related note, i've always believed that what differentiates my life experience from those of others whom i know is the fact that when strange people ask me to walk into their house alone, or watch their car while they take care of some business, or if they can crash at my place because they got thrown out of the halfway house, or if i'd like to eat the mushrooms and pills they found in their coat pocket, i invariably say "yes".]

this place was fairly understated, but i kind of liked the phantom skull on the patio fence... 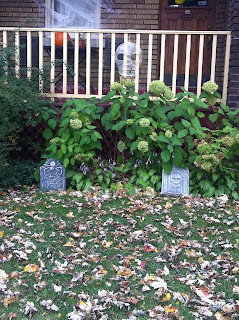 this one keeps making me want to yell out "raise your hand if you're sure". except no one would know what the hell i was talking about. not that they normally do. 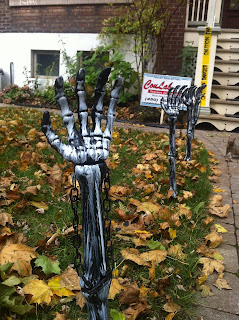 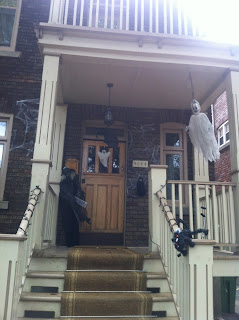 "terror this way". because a severed hand laid out on a bunch of bones like a hotdog on a grill and the remains of a guy buried up to his ribcage is just much too cheery, the real terror has to be further along. 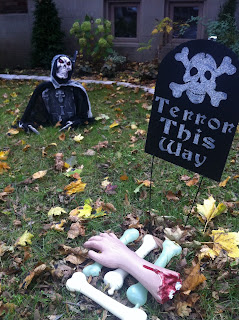 i didn't stand here long enough to notice what this guy was holding in his hand. and that will haunt me for the rest of my days. 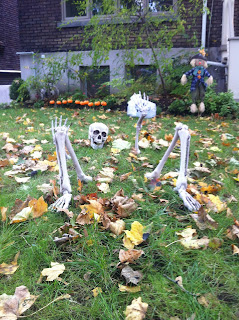 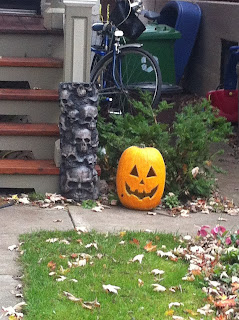 if you look carefully, there's this rock 'n' roll metallic guy who looks like an 80s halloween refugee in the background, hiding behind a plant all "notice me, please, they stuck me back here behind the more traditional skulls and the inexplicable ski poles". 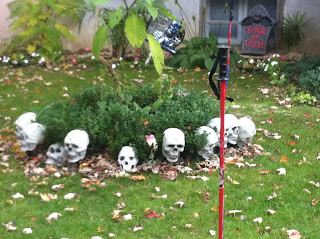 i normally try to be polite and not run right up onto people's property, but this was so awesome and adorable that i had to... 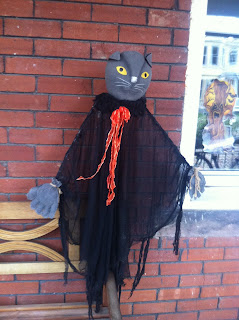 weird, happy scarecrows are super-popular in montreal. i don't ever remember seeing them in halifax. is this a language barrier thing? [come to think of it, i don't even know how to say "scarecrow" in french. someone will fix that, i'm sure.] 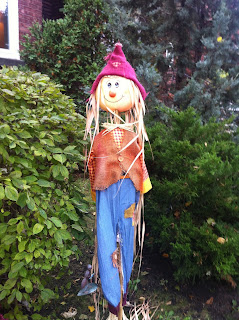 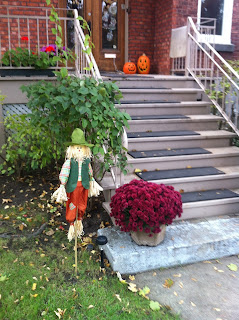 these things that look a little like election lawn signs for a party i'd totally vote for are suddenly everywhere. there are two models. this is one of them. 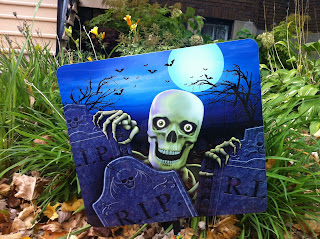 "if you're happy and you know it clap your hands" 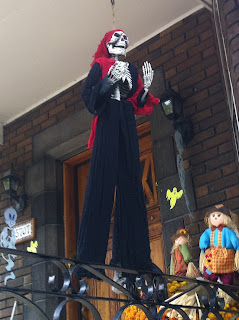 a witch doing the can-can. big props for originality. 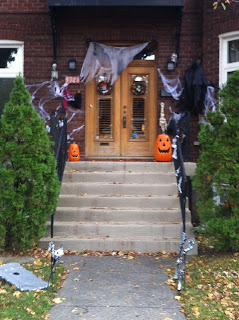 in my desperation to get a good shot of the dangling ghoul, i totally missed the fact that the mysterious horned black-shrouded thing behind it or the humping scarecrows in front of the door were way more interesting. 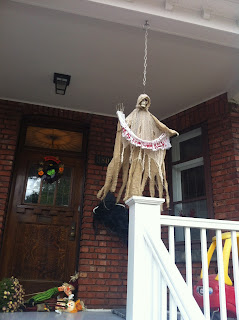 you definitely want to fire your undertaker if he does this. 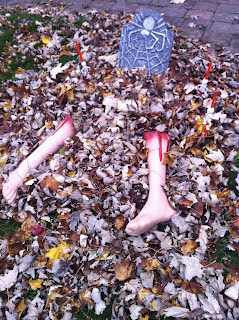 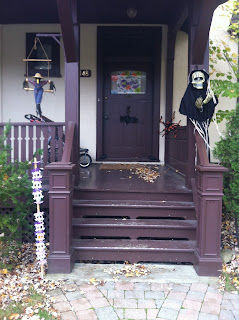 "welcome to skull village, where it's easy to get a-head" 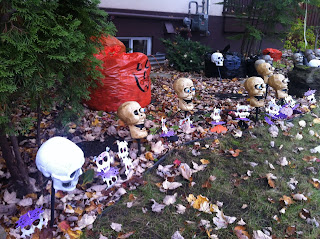 i really like the contrast of the super-serious "death is coming for you" skulls and the zany "look what i can do with my eyeballs" skulls. i'm assuming the serious ones are just pissed because the other guys got to keep their eyeballs. 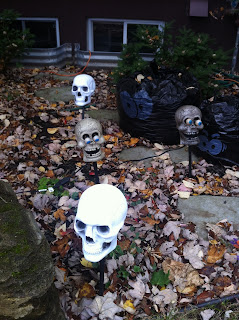 this house had some really interesting elements, including an insanely evil rat [sitting on the front post, across from the pile of severed feet] who looked like he'd concocted some hybrid of rabies and the plague and i really wanted to get closer shots, but this was the one case where there was someone sitting in the window, giving me the stink-eye, as if to say "how dare you stand there appreciating the gaudy seasonal decorations i put on my house. those aren't meant for other people to enjoy." of course, if i'd been standing there with a television camera, rather than by myself with a phone and i'd intended to share her decorations with thousands of viewers, rather than the half-dozen people who will see this blog post, i'm sure she would have been all "come right up". nuts to you, hag. i hope the evil rat bites you in your sleep. 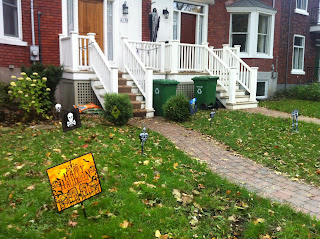 i absolutely need this sign for our door. and car. and the litter pans. 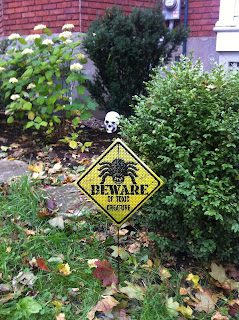 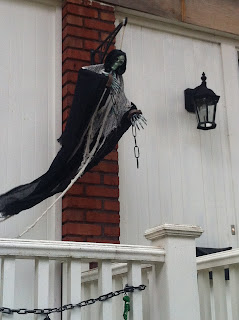 if you wanted to keep me away from your house, a good way would be to do as these people did: construct your halloween so that it's better photographed from across the street. on another note, it kind of looks like that black ghost on the right hand side of the tree is being lynched. 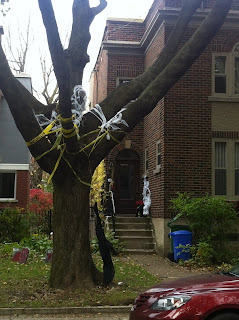 these guys decorate their lovely garden every year and they always have the best scarecrows. 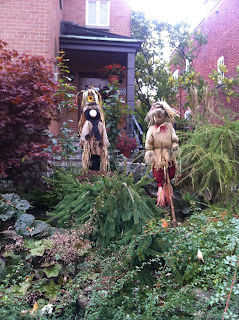 am i the only one who thinks this guy looks kind of like a pinata? 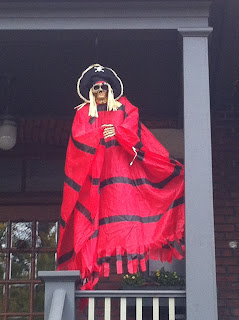 It's interesting, really. We celebrate All Saints' Day on November 1st though. We visit the graves of deceased relatives and light some candles.
2:20 AM

morelikespace said…
I think that the Catholic tradition of All Souls Day/ All Saints Day is where Halloween comes from. But apparently the "All Souls Day" portion of things caught on more over here.

The kitty was pretty special- I've not seen anything else like him. Up close, he looks like he's probably home made, which is even more impressive.
10:21 AM