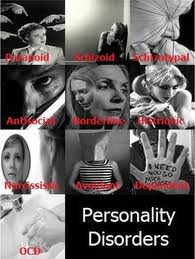 much of our conception of mental disorders is wrapped up in the "biggies", things like schizophrenia and bipolar disorder that tend to result in dramatic deviations from "normal" behaviour [even though they sometimes don't] and reasoning. but really, that's just the top layer of the crazy tiramisu. there are many further classifications of thought and mood disorders that don't get spoken about as much, but which may affect far larger numbers of people. they also tend to be more controversial, because they are less evident. someone who refuses to eat and bathe or speaks to people who aren't there or who cuts themselves because they believe that they have bugs living under their skin is obviously in need of help. someone who is prone to wild exaggeration or who thinks only of themselves often seems more in need of a boot to the head. ultimately, the fear is that behaviour which is merely odd or eccentric can be labeled as disordered thought, which obviously raises a lot of questions about the limits of individuality. i'm not going to get into the arguments for and against, that's for another day [and should probably involve a lot more voices besides mine]. this is just a quick introduction.

generally speaking, personality disorders are a group of symptoms established over the long term in an adult personality that affects or compromises an individual's thought patterns and interactions with and beliefs about the outside world. so what the hell does that mean?

I PROBABLY CAN'T ANSWER THAT QUESTION, BUT THERE'S MORE TO READ...

well, the crux of the matter seems to be where one draws the boundaries of normal or rational behaviour and the value of moderation. if you accept that one should be moderately social, moderately trusting, moderately emotional, moderately independent and moderately empathetic then it stands to reason that behaviour that falls outside the bounds of "moderation" is abnormal. of course, you then have to establish a standard of normalcy, which will obviously have some dependence on dominant cultural values and open a whole can of social worms that i said in the opening paragraph i was going to try to avoid. i hope this serves as an example of the complexity of the issue. 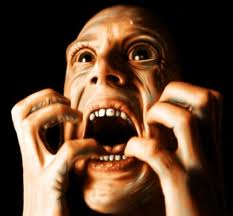 a. odd or eccentric disorders [remember what i said at the beginning about stigmatising certain behaviour?]

b. dramatic, emotional or erratic disorders

navigating the waters of these personality disorders can get very rough very quickly. for starters, the naming of the disorders themselves seems to be some sort of psychiatric trap. among the disorders in cluster "a", you have both schizotypal AND schizoid personality disorder [although the w.h.o. only lists the latter]. those are two different disorders, the first characterised by abnormal [loaded term, i know] or eccentric thought, superstitious or irrational beliefs and the second by social withdrawal, marked introversion and apathy. and both are very different from schizophrenia. of course, all three can share symptoms. and you can have both schizophrenia and a comorbid personality disorder [schizo squared?]. confused yet? no? 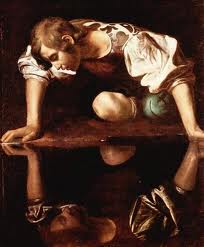 theoretically, the difference between being charmingly eccentric and in need of help falls at the point where one's eccentricities start controlling and interfering with everyday life. if i make a to-do list every morning when i get up, that's one thing. if i wake up two hours late and still can't leave the house without taking the time to write out my list, or if i spend the entire day too anxious to do anything because i'm afraid of not knowing what i'm supposed to be doing, that's a problem. in general, then, we can say that one's level of flexibility is what's at question, but it's not always so easy to sort things into one pile or another. and that's assuming that, as a subject, i even perceive that i have a problem. most people with personality disorders actually believe quite the opposite; they think that they see things more clearly and accurately than others. which raises the question of who gets to decide when a behavioural quirk becomes problematic. if i don't think i have a problem, should that be good enough? would it be good enough if i were a drug addict? it's a very slippery slope. 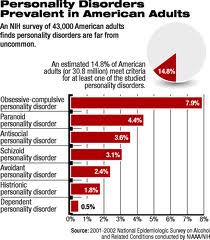 in keeping with the somewhat vague criteria for defining personality disorders, their causes are likewise somewhat difficult to predict. there does seem to be some genetic predisposition, in that people with a family history of mental disorders of any kind are more likely to produce children with personality disorders, but no one has come up with a reason why. childhood experiences seem to be a major factor, whether it means some sort of abuse, neglect or general instability, which could technically mean that personality disorders are actually a long-term effect of post-traumatic stress disorder, the brain's way of orienting itself towards the world in reaction to extreme stress. and then there's the fact that personality disorders seem to disproportionately affect those who have "low socioeconomic status". so on top of all the other misery it brings into your life, being poor may make you crazy.

as tricky as they are to define, personality disorders are even trickier to treat. medications may help manage some of the acute symptoms of the disorder, but therapy, usually structured to identify the causes of disordered thought patterns and to "train" the mind to think in a different, less damaging way, is thought to be the route to a permanent recovery. i say that it is "thought to be", because the fact is that there is comparatively little research on personality disorders, so theories about a cure are still highly, well, theoretical. [this may be a side effect of those who may have disorders not admitting that they do. if i don't believe i have a problem, why would i present myself for treatment or analysis?]

if this all seems excessively complicated, it's because it probably is. and it warrants further discussion and study. but for today, we'll leave off there. more on the subject at a later time.

[you can see the full article where the chart above came from here.]

outsourcebaybay said…
I really have a good time reading all this posts here. Keep on posting

outsourcebaybay said…
genuinely have to mention you establish many excellent facts and should submit a variety of suggestions to add in shortly after a day or two.
Bipolar Test
8:19 AM