in 2011 montreal, a man named antoine [kevin parent] with a seemingly charmed life- beautiful young girlfriend, two daughters, a career as a successful dj, good health and great looks, struggles to come to terms with his personal demons and appreciate the advantages that he's been given. in 1969 paris, a young mother named jacqueline [vanessa paradis] devouts herself passionately to ensuring that her son with down's syndrome is able to overcome the odds and have a long and happy life. hovering somewhere between the two worlds, a mysterious dark-haired woman appears, alone and tense, her relation to the narratives and her place in time unclear. 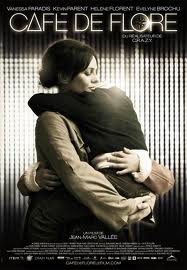 for a good portion of jean-marc vallée's "café de flore", the links between the stories are unclear, the timelines strangely distorted by a nonlinear plot and almost jarring edits. paradis is both fiercely protective of and strangely dependent on her son, the two of them lost in their own world, oblivious to everything that goes on around them. they communicate in their own sort of language, share the same experiences and maintain an enchanted sort of reverie despite their relative poverty and the stigma of being a single mother and a mentally disabled child.

in the present, we learn that antoine, far from being happy with all he has, is troubled by his own and his family's history of alcoholism and drug abuse and by the fact that he abandoned his wife, carole, a woman he had been with since his teenaged years when they both bonded over their budding passion for music, in order to pursue a relationship with rose, a younger woman [his current girlfriend] he met at an alcoholics anonymous meeting.

his ex-wife, we learn, is the dark-haired woman we see in strangely disembodied clips from the beginning of the film. she is still in love with antoine, still sees him as the boy she fell in love with, the only man she has ever loved and still believes that somehow, he'll return. she is plagued by terrifying nightmares that cause her to sleepwalk and drug herself to numb the pain. she also takes solace in esoteric subjects- reading books and consulting a medium.


we see the genesis of each of antoine's two great loves. beginning in his youth, his relationship with carole is open, communicative, interactive. his relationship with rose, by contrast, is wordless, inexplicable and all-consuming. his family, both his children and his parents, are skeptical of his newfound passion and yet he is compelled to be with rose with a force unlike anything he's ever felt in his life.

the plot lines of the film are extremely simple, almost ordinary. vallée disconcerts his audience a little by bouncing them from story to story, from one point in time to another, but it is clear that each story is about profound, all-consuming love, the forms it can take and what it can mean to lose. the film looks gorgeous and the production is quite self-consciously stylish. much like he did in "c.r.a.z.y.", vallée makes heavy use of music to help move the stories and unite them. little by little, we see the inexorable movement towards the intersection of love and loss, to an end that is both emotionally draining and peculiarly untrustworthy. [there are hints in the film that all might not be as it seems.] 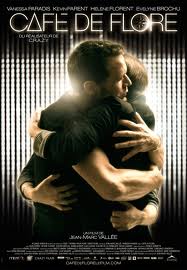 because the stories are rather spare, much hangs on the ability of the actors to make us feel what they're feeling, to build our sympathy and they do not disappoint. paradis is perfect as the mother, strangely childlike herself despite her air of self-confidence. parent, in his first performance, is startlingly good. he makes antoine, a deeply flawed man who the audience could easily hate, affecting and approachable. he needs to be that good, too, because hélène florent, as carole, is heartbreaking. she's done nothing wrong and yet she finds herself, stunned, thrown to the outside of her life. it's a powerful trio of performances, anchored by an exceptional supporting cast.

the film is not flawless. the superlative stylishness of the imagery and editing, while it makes for something visually arresting, does sometimes have the effect of jerking one out of the story- the craft is a little too obvious to keep one submerged in the events, particularly because, for so much of the film, a lot of what's going on is unclear. the all-important soundtrack, while it augments the story at many points, can get heavy-handed, again pushing the viewer to the sidelines while the filmmakers revel in their work.

perhaps the greatest flaw is that we never really get a handle on antoine's relationship with rose. most of us understand that sense of undeniable, incomprehensible, powerful attraction, but we likewise know that communication, sharing and understanding- the sort of things he had with his wife- are what makes a relationship viable in the long term. between antoine and rose, we see raw passion but little else. you want to tap the guy on the shoulder and tell him he's making a big mistake.

nonetheless, the film is big and intense and heartwarming and shattering and bold and its strengths are enough to overcome it's weaknesses. let yourself be drawn in.