September 30, 2011
ah, friday, how i love forcing myself to think about the good rather than grimace at the misery. truth be told, the misery in the world is so bloody miserable that it's difficult to see the positive at times, but i do think it's important to be, as a very smart man once said, "loving, hopeful and optimistic", because the alternative would be... well, there's no need to discuss that. so what are some of the things that helped me keep the spark of love, hope and optimism alive in me this week? 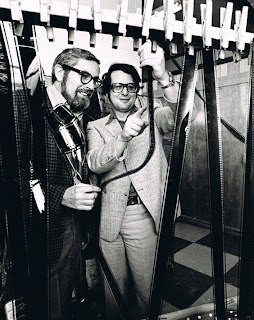 a mentor :: this actually is a somewhat sad story, since the reason i thought about it this week is because the person in question died, but dom has repeatedly spoken of his "mentor", a man named john dunning, who was the first person to encourage him in his interest in film and to tell him that he should pursue his writing, his passion for the industry and a life within that milieu. right now dom is living his dream, being happier than i've seen anyone in his job and showing people just how useful someone madly in love with film can be to a company in the industry.

without getting too petulant about it, i feel like that's something that i never had and as a result, i believe it's taken me a lot longer to find my way with what i love and a lot longer to build the confidence to chase my dreams. that's my cross to bear, but i think that it's important to remember the incredibly positive role one can play by encouraging others and making them feel as if they have something important to contribute.


a stand :: many have heard of the saga of occupy wall street, but many more have not because of the media's unsurprising unwillingness to grant them any notice. nonetheless, word of the protests and repression have leaked out through various forms of social media and the cause continues to gain momentum. what is most offensive about the contempt shown for the movement [even i got flamed on twitter for posting a supportive message and i'm a twitterverse nobody!] is what it says about the agenda of corporate media. after all, these protestors at least purport to speak for a vast majority of the population. surely that deserves some mention?

the fact is that even conservative investors and prudent financial managers are facing terrifying times with few prospects for relief, while a tiny minority make off with the spoils. for stories from the front lines, check out we are the 99%.

an educated cackle :: considering that he's always the one to show me new things in television and movies, it gives me no small measure of delight to introduce dom to blackadder and to have the opportunity to watch the episodes myself for the hundred and seventieth time. i'm amazed at how well the humour continues to stand up and, while it helps to know your british history, how accessible it is. i'm also continuously amazed at how quotable much of it is; a veritable fount of one-liners and future in-jokes. it continues to be one of those programs that brings strangers together through pass-phrases like "i have a cunning plan"...i've been a dedicated fan since i first came across the series [the finale of season one] in the mid-eighties. and by the way, hugh laurie might be dr. house for millions of americans, but to me, he'll always be thick-as-a-whale-omlette prince regent george.

and a guilty pleasure :: while i've been enjoying blackadder immensely, i've also been watching episodes of csi. and i mean the original csi, the one in las vegas. and not the new shows, either. i'm really just a fan of the first six seasons [season seven has its moments, but they were losing their edge] and even that is kind of an admission for me, because big-network, big-budget shows are really not my thing. usually.

but i do find that there is something loveable about the unabashed geekiness of the characters, something that the spinoffs dropped in favour of prettified personae [who aren't nearly as attractive, if you ask me]. i also think that the original series has a dark sense of humour that sets it apart from its lesser cousins. that's really what captured my attention, along with the odd, shadowy visuals and, of course, the healthy dose of anatomical ickiness.

yes, it can get overblown [particularly in the first season] and, yes, they stretch the limits of science in the name of clever outcomes [important to remember if you're called for jury duty], but i just get sucked in. i'd like to add that i also think the discreet back and forth symbiosis between the show and mythbusters also makes for great entertainment.

as you can probably tell from the last couple of friday favourites, i've been enjoying a lot of t.v. on dvd lately... what can i say? if i were feeling the flow of creative juices, i'd follow them, but at the moment, i'm kind of in the mood to be entertained. [and my recent choice of entertainment, the campaign for the republican presidential nomination, hasn't really been developing this week. i could be watching the campaign for the ndp leadership, which is more relevant both to my interests and to my country, but the republicans are just so much funnier...]

personally, i'm still waiting for the universe to give me some sort of celestial birthday gift, which would be late, but if it's really awesome, i suppose i could forgive the oversight...

thanks for reading, as always and, as always, here's your weekly cat pic. how many can you count? 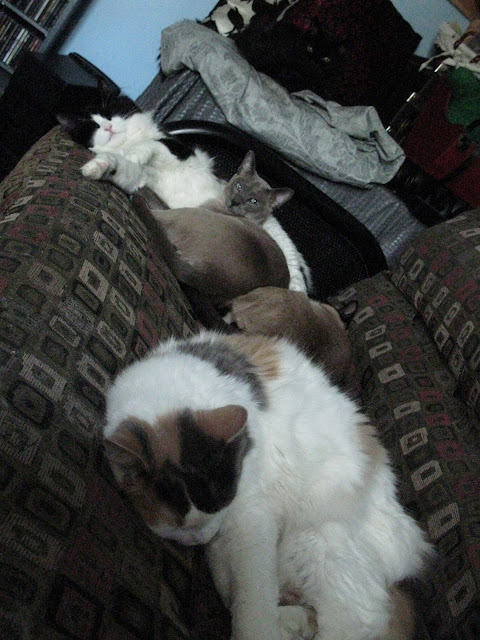 morelikespace said…
I was sort of sorry to see it tail off, especially when the original cast members started leaving, but I suppose it happens to pretty much every show on network television...
8:04 PM