September 27, 2011
i've posted here before about different strange and wonderful dreams that i've had, both because i use dreams for inspiration in my writing and because i just find the brain's method of sorting through its trash kind of interesting as a phenomenon. no matter how weird or frightening my dreams have been, i have always found them somehow reassuring and not once have they ever made me wonder about my mental state. until now.

last night, i dreamed about sharpening pencils and cleaning the litter pan. let me be clear: there was nothing odd about these pencils- they were standard and it's not like there were hundreds of them, which would be weird, but just a few pencils. and me. and a sharpener. and the litter pan was pretty much exactly as it normally is. [it might have been in a different location in the apartment, but the apartment looked exactly the same, so i don't think that qualifies as poetic license.]

now i'm scared. exactly how brain dead do you have to be before your dreams become so banal you want to wake up just to change the channel? it's like my mind is literally finding stuff that's so boring they'll put me to sleep. which pretty much backs up my theory that my brain is pretty deeply disturbed, because it's obviously missing the fact that it's already asleep. 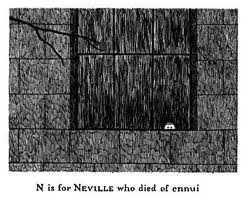 what's worse is that i can't even complain about this to anyone [except you, you're the only one who listens] because the rest of the world seems to think that having dreams about a life sharpening pencils and scooping poo is just fine. it's not fine. my brain has evidently exhausted its sense of wonder in the universe and is now pursuing its own fantasy of killing me through mediocrity. it's bad enough that i've been struggling with a persistent case of writer's block, but now my i'm denied the one recourse that has always been open to me when reality let me down? makes me want to take one of those dream pencils and stab myself in the ear to show who's boss. [probably another sign that i'm not well.]

what's next? i'm going to start daydreaming of doorknobs? an epiphany of ice cubes? i mean, sure, these probably all mean something, if you believe that symbols in dreams have immutable or at least culturally specific meanings [which i'm not sure i do], but am i the only one concerned that the extent of my imagination, when all the rules are gone and the limits are removed, is to sit at a table and sharpen an instrument that maybe five people use on a given day?


oh. i am the only one? well then. carry on. dream your huge, dazzling dreams of cars that turn into dragons or choirs of ancestral ghosts. i'll doubtless be folding blankets or something just as exciting.