music to hallucinate to

August 03, 2011
or astral project. or lucid dream. the point is that this is the sort of music that you should put on for a big night out in an alternate dimension. 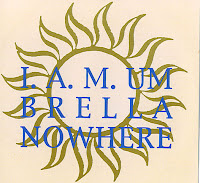 i.a.m. umbrella :: nothing :: this album used to drive me nuts when i was doing radio, because it's indexed as one long track, despite the fact that it has different track titles. i don't have to worry about this now, so i can just sit back and enjoy this oddball gem.


voice of eye :: well, any album, really :: thanks to a little-known government program that added pure peyote extract to the water in certain sectors of the southwestern united states in the 1990s, we are able to enjoy music that sounds like your brain being squeezed through a tube traveling through all history. the combination of electronics and acoustic instruments being sucked into a wind tunnel, punctuated by rhythm is, i think, exactly what the elders believed you should be hearing when you went off into the wild to have a vision quest. check out any of the mariner sonique/ vespers/ transmigration, as well as their collaborations with life garden, or their work with ure thrall and others as asianova. [oh, an i'm kidding about the government adding peyote to the water. although it would sort of make sense.] 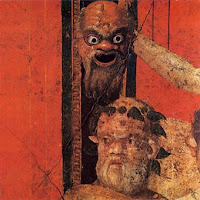 mandible chatter :: hair hair lock and lore :: apparently when the two members of this bay-area band met, one of them told the other he'd moved to san francisco to be closer to the residents and that pretty much brought the band into being right then and there. their output in general is of high quality, but there's something about the particular combination of whimsy, melancholy and unease at work in this release that makes it stand out in my mind. bonus points for the "severed head marionette" artwork on the cover.

unfortunately, no one has uploaded a fan video for any of the tracks from this album, but i did find one for "ossification" from the equally magestic "drinking out the hourglass" 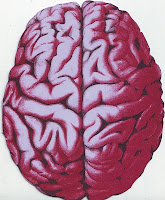 maeror tri/ troum :: again, probably most releases will do :: first a trio [maeror tri] and then a duo [troum], both incarnations create some of the most oneiric tides of sound you're likely to find. i'm partial to "language of flames and sound" because it comes in a brain, which seems appropriate, but it's honestly hard to find a real miss in their back catalogue. the troum material is a little more propulsive, the maeror tri a little more meditative. it's all worth checking out and it's all worth listening to on headphones, by yourself, in a darkened room. let your brain out to play already...