August 19, 2011
i took a bit of a blog vacation last week since i had a friend visiting and i do love showing off montreal to visitors. the weather was cooperative and it gave me the chance to explore parts of the city i don't get to often enough [because i'm not a tourist]. it also gave my brain a much-needed rest from routine and worry to just spend some time with someone i missed. as a result, much of the later part of this week has been spent between taking care of mundane things and feeling a little nostalgic, as i'm sure most of us do from time to time. here are a few things that perked me up.

la distillerie :: a friend and i happened upon this place quite by accident not that long after it first opened. they now have three montreal locations where you can imbibe their unbelievable cocktails, either in regular glasses or, if you're feeling especially thirsty, in large mason jars. they have a set group of specialty cocktails that are always available and have three monthly specials that are always changing. [those generally feature a particular alcohol or brand. august is tequila month!] they use good quality hooch, too, so the cocktails aren't necessarily designed to disguise what it is that you're consuming. the imaginative combinations [i guarantee there will be at least a few that will make you scratch your head] include things that taste like root beer floats, but also things that taste like pure, distilled fire if you like things a little stronger. for those who prefer to keep things more basic, there's also a decent selection of beer and cider. the only trick is that the one that we usually go to- in the quartier latin area- gets packed pretty quickly, so it helps if you can get there close to their 4 p.m. opening time to secure some real estate. dom swears by the rock-a-rula. i'm a fan of the white lady, but i always have to try the specials.

MORE FAVOURITES PLUS YOUR WEEKLY CAT PIC AFTER THE BREAK...

spacing :: i've added a permanent link to their site on the side of the page, but i thought i'd call attention to this fascinating little canadian publication. i was reminded of them when i wrote earlier this week about montreal's efforts to maintain its downtown core and to fight the dreaded "doughnut effect" of suburbanisation. spacing deals with the different aspects- enjoyable and challenging- of urban life in canada. as might be expected, it started out in toronto [which is where i first got familiar with it] but has since developed hubs across the country and recently launched their first national print issue. the publishing schedule of the print version seems a little erratic, but the various city blogs are frequently updated and full of fascinating information. a great place to get some offbeat ideas for visiting these cities. 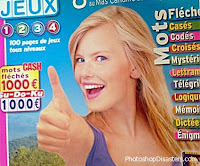 photoshop disasters :: to be fair, this is a site i've known about for a while, but i felt the need to share. if you've ever looked at an advertisement and thought that something was a little off, this page is dedicated to confirming what you suspected: you are right and they are wrong. "they" in this case being advertisers who, whether out of lack of time or common sense, are increasingly prone to foisting images on the world that are inadvertently funny or sometimes just creepy. free-floating hands, misplaced shadows, strangely warped and boneless bodies... all in a day's work. once you start to look, however, i will say that no advertising will ever look normal to you again. [i know graphic designers who follow this page religiously, so they know what not to do.]

one of the great things about having a house guest was that i got to show off my furbabies. i'm a very proud mom, as anyone who has ever dropped a hint that they might want to see photos has learned in a hurry. [i keep photos of all of them on my phone at all times, lest someone seem vaguely interested in knowing what they look like.] in general, the kids were well-behaved, although seth and julia are always a little shy around strangers. [seth got over it eventually.] however, once our guest had departed, the kids let it be known that i wasn't going to be able to fold up the futon so easily. for the next two days, it became the kitty playground, where they spent all their time [on it or under it] and while i could have simply shooed them away and packed up the bed, it gets a little difficult when you have scenes like this: 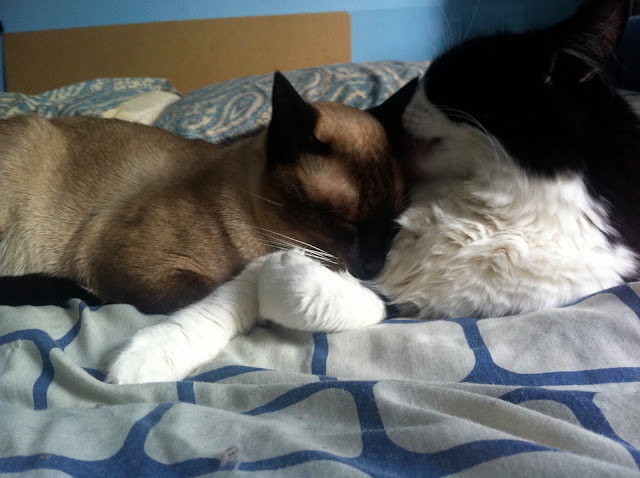 that's all for this week. i do hope that everyone is enjoying the twilight of summer. personally, i'm an autumn fan, so i always like this time of year. i like it even more because the beginning of september marks the date when the stm has to give me my metro station back. it's been closed all summer ["closed" ironically meaning ripped open in this case] for unspecified renovations. thanks for reading!

Biba said…
I would definitely ask you to be my guide in Montreal, if I ever got the chance to visit it. Those coctails in big glasses sound nice.

And of course I would love to look at all the photos of your furry babies :)
12:33 PM

morelikespace said…
Any time you want to visit, I would be happy to show you around!
11:52 AM