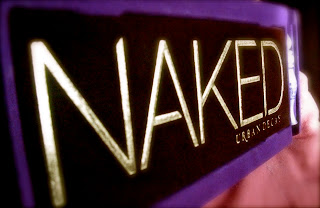 i usually try not to get sucked into hype, but i'd heard so many people go on about the magical urban decay naked palette and how it was basically the holy grail of versatile, neutral shades of eye shadow that i couldn't help being curious. compounding this, there's the fact that, although it's permanently available from urban decay and from sephora, it's been out of stock at the sephora web site for about the last hundred years... so it has the allure of something that doesn't want you to possess it.

add to that the fact that most urban decay shadows are made of large quantities of win [except for the shades with glitter, which are decidedly formulated with fail, but there's none in this palette] and one of the colours included in the naked palette is "sin", which is one of my favourite shadows ever by anyone and which is disappearing at an uncomfortably fast rate from its pan and i basically got myself into a frenzy of consumer madness. 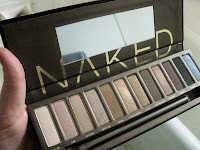 thankfully, a very nice lady in the united states took pity on me and ordered me one. so for the last several days i have been trying out variations on the neutral eye with all the different colours included.

when you can get your paws on one, it's a pretty sweet deal. there are twelve different colours- all neutral, but ranging from light to dark with both shimmer and matte textures- plus a full size brush, plus a miniature bottle of urban decay's "primer potion", which helps eye makeup go on better and stay on better. all this will cost you $48, which works out to $4 a shadow, even assuming the brush and primer are free. of course, the shadows in the palette aren't nearly as big as a regular urban decay shadow, but those will run you $17 a pop for only 0.2g more worth of product [according to the u.d. web site, the fill weight per shadow on the naked palette is 1.3g, on a regular shadow, 1.5g]. so for this not to be a good investment, there would have to be something seriously wrong with the product.

fortunately, that isn't the case. i compared "sin" to the remains of my individual pot and they seem exactly the same in terms of colour, texture and durability. so occasionally when things look too good to be true, they're still true. doesn't that just make you feel awesome about everything for a moment?

the idea behind this palette- which really does seem to have turned into a license to print money for the california company- is to give a range of basic shades that can be used in combination to go with virtually any sort of look. they are mostly shimmery [although there is a matte beige and a matte medium brown], mostly warm [particularly the mid-tone shades] and, yes, they are extremely versatile. a number of the shades are ones that you might have seen before, but the point here is that they're all assembled into one perfect little package.

i agree that these shades will suit pretty much any skin tone, dark or light, warm or cool. and each shade exhibits the typical incredible pigmentation of urban decay shadows, so you really get some bang for your buck. if i had to criticise, and this would be under some duress, i'd say that i wish that they'd included one or two less shimmery shades [there's a lot of frostiness, which can be a challenge for those of us over twenty-five]. i hadn't actually "met" urban decay's matte shades before and now i'm happy i did. i'm pleased that they did not include any "glitter" shades, since those were the ones that made me want to write off the brand when i tried them. in fact, there's not a single shade i don't like and wouldn't use here. [the sparkly black "creep" doesn't do much for me, since it's a dead ringer for a lot of "black with silver sparkle" shades that already exist, but the very popularity of those types of shades makes it obvious why it would be included with this set.]

ultimately, this is the kind of thing that almost every woman who wears cosmetics would benefit from having in her collection. for those who want something simple and basic, it offers a lot of alternatives at an excellent price. for those who like to have a variety, it offers the opportunity to grab a dozen urban decay shadows for barely more than the price of two regular ones. plus, of course, the shades are ridiculously easy to use. and you get a brush and a tester bottle of primer. what could possibly go wrong?

here are a few looks i put together with shades from the naked palette. i'd like to add that, in all of them, i used the primer potion underneath. my initial experience with primer potion was not great, but i put that down to the fact that it was a sample and it was a gold-coloured shimmery version rather than the regular one. and there may be some logic to that. i liked the primer potion much better in its "regular" form. personally, i prefer a primer with a little more colour, because my lids are fairly dark [i look like a racoon in the mornings] and i didn't find that primer potion made shadows last as long as my usual base- mac's painterly paint pot- but it did prevent creasing and it did make the colours nice and intense, which is what a base is supposed to do.

because all the shadows were coming out of a single palette, each of these looks took ten minutes tops to complete. 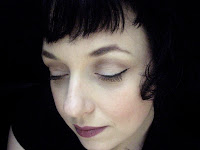 "naked matte"
like i said earlier, i really loved the matte shades [naked and buck] included with this palette and so they were among the first ones used. as a lady who loves her dark lips, this is the sort of understated eye treatment i often do, so that the focus can be a little lower. this is also the first look i did with musky amethyst, one of the new lipsticks from mac's "semi-precious" collection. 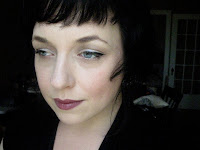 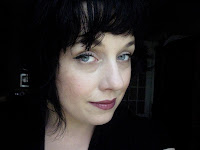 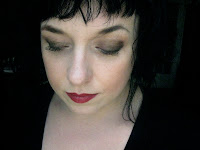 one of the suggestions on the packaging for use of this palette is that you can do "smoky bronze" looks. i went for more of a "smoky gold", which was exciting to me, because i've never had enough gold shades before to do this sort of thing. again, i went with a very pigmented lip, because, despite the "smoky" effect, i felt that the eye was fairly subtle and could deal with a deeper lip colour. on the other hand, i can also see doing this with a more restrained lip colour. hurrah for versatility. 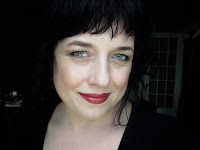 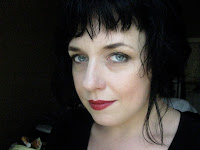 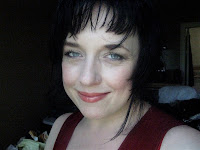 so the whole point, supposedly, of having a naked palette is that you can do very natural looks. i actually find that the shimmer in a lot of the colours makes this trickier than you would think, but there are definitely shades [hint- the ones i've used here] that capture that nice, slightly pinky flesh-tone and make it into something quite lovely. [note- if your flesh tone isn't pinky, there are probably shades in here that will be a better match for you.] 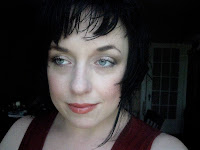 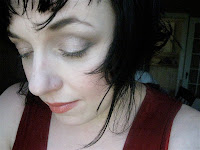 Biba said…
I'm planning to get UD Naked too, eventually, because I really like shades like these.
Until then I'll have to be satisfied with few other "neutral" palettes - Sleek Oh, So Special and Nyx 10-color palette.
3:16 AM

morelikespace said…
It's definitely worth it! Personally, I love UD shadows, although they're *very* shimmery. It's the kind of thing that's perfect for getting ready in a hurry or when you're not sure what to do.
8:15 PM