July 26, 2011
if you follow [as opposed to simply "wear"] cosmetics, you'll undoubtedly have heard the word coral more times than you thought you would in your lifetime. it seems like for the last year, everything has been coral- lips, cheeks, eyes, hair... ok, i'm kidding about the hair, but everything else has definitely had a coral tinge. so what's the big deal?

well, part of it is that people who make colour cosmetics want to keep feeding that desire to grab what's new, what's happening right now as opposed to three months ago, which is undoubtedly no longer cool. but the powers that be said that about black lips a couple of years back too and while people flocked to try it out, most stopped at the trying stage and the fad went away [except in my case, since i've always liked that sort of hard futuristic edge that comes from black lips, as opposed to dark red or purple]. but you say "coral" in front of makeup fans and immediately they're like zombies, pelting the contents of their wallets at you and saying "more".

first things first. what colour is coral, exactly? i'm glad you asked [not that you did, but i'd have been glad if you had asked, just so you know]. defining coral actually helps in understanding its popularity. although corals in nature can be any of a wide variety of colours, they are most often known for being a shade that mixes orange, red and pink in more or less equal measure. the proper colour "coral" is a medium-light orange with a touch of pink, a touch that makes it a little cooler [as in colour temperature, not as in hip], but there are variations on that shade which run the gamut from light to dark, some leaning more orange, some more red and some, you guessed it, more pink. it's an odd situation where a colour at once references something fairly specific and yet has a range within it. saying that something is coral is more specific, for instance, than saying it's "green", but there's still room for interpretation. 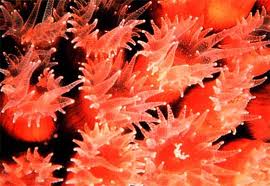 within that range, though, you are essentially dealing with tones that are very flattering on skin. the pink element keeps shades from being too warm. the orange keeps them from being too cool. so as a result, there aren't too many skin types that can't wear coral. those same elements also mean that it's less stark than a true, primary red, even when it's a fairly bright shade. and it's more original than pink, which has been around forever and can't really be expected to carry the burden of being an "it" colour. once again, for a shade that seems offbeat or hard to pin down, it's actually a pretty easy thing to carry off. easier than the black lips, at least.

here are a few things i've done incorporating corals [which have snuck into my cosmetic wardrobe despite the fact that i try not to buy trendy things... it's just so damn easy to wear]. 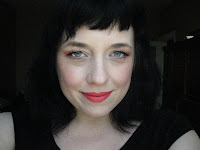 last fall, mac introduced "toxic tale" lipstick as part of their disney villains collection. it sold out roughly three days before most people knew it existed, which is kind of a frustrating thing about mac's limited editions. the good news is that they do bring popular colours back, so i have every confidence that if you missed this one the first time, you'll have another opportunity. and since it's coral, i wouldn't be surprised if that opportunity came pretty quickly. the coral colour i used on my eyes was also a limited shade from earlier this year, but mac does have a permanent shade called "electric coral" [available at pro stores, or you can order it over the phone] which is fairly similar and lives up to its name. 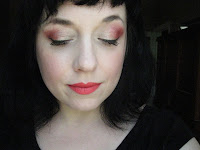 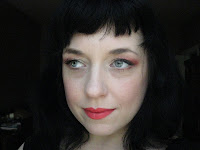 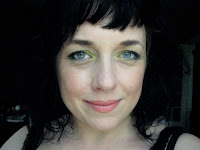 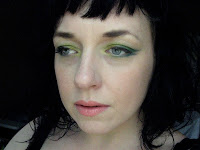 this shade would be an example of something that mac has already brought back. it debuted last spring and sold out, so they brought it back again this year as part of their "fashion flower" spring collection. in fact, the blush- another coral shade- was also a repeat performer this year, having popped up a couple of years back in a limited edition. both of these are super-soft, understated corals, easy to wear and very safe for people who don't want anything too vibrant. or, alternately, they make a nice counterpoint for when you want to do something really intense with your eyes. greens and corals seem made for each other, as a rule. not that there are rules, but, if there were, that one would make sense. 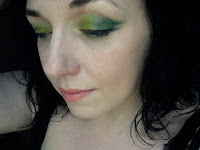 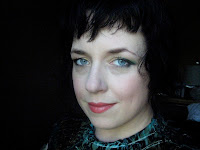 this lipstick is an example of the red end of coral. [is it me, or does that sound nasty?] the shade has very little pink to it at all, but it's a little softer and more restrained than a full-on red. this is a great shade for summer, which is, i suppose, why mac came out with it as part of their summer collection this year. if you blinked and missed it [again, it sold out practically before it went on sale], the good faeries have told me that there will be a shade that looks awfully similar coming out at mac in the first week in august. when a colour is hot, cosmetic companies tend to want to take advantage of it as much as they can. 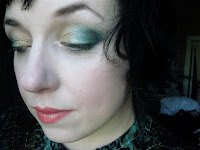 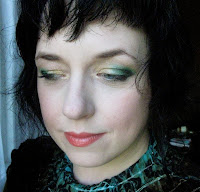 Biba said…
Coral sure is a popular word and colour in make up industry, I agree...

You look beautiful on all pictures!
2:33 AM

morelikespace said…
Thanks, Biba! And yes, coral is everywhere at the moment. I think the fact that it is easy to wear makes it more or less a license to print money for cosmetic companies.
10:23 AM