like a lot of canadians, i've been monitoring your "labour situation" [stoppage of service] with some interest. i've been interested enough that i've been checking your updates, even now that everyone has been back to work for two and a half weeks. because i still have some questions.

i noticed today that you posted this update: 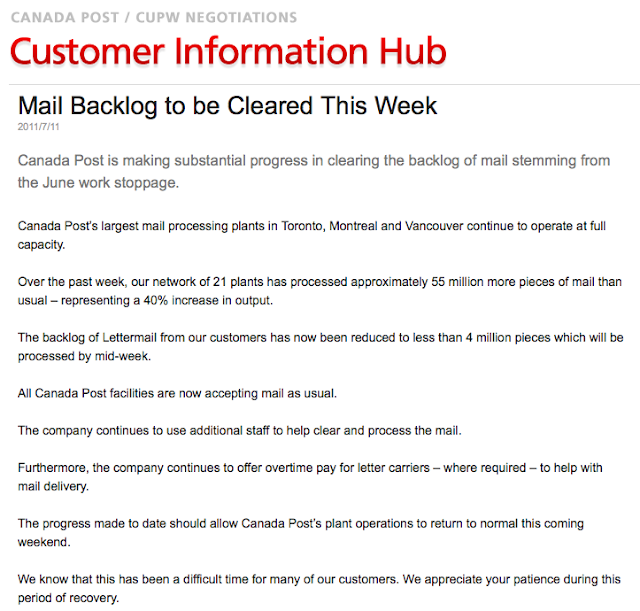 now, not to be picky, but mid-week would technically mean tomorrow and since i'm still receiving approximately one piece of mail per day, dated at the latest june 21st, that seems a little optimistic. but thanks for passing on the hope. and good on you for filling your missive with numbers that are conveniently difficult to fact-check. you seem so proud of yourself for clearing out the backlog of a two week service stoppage in just a little over two weeks, who am i to burst your happiness balloon?

perhaps this seems like semantics to you, but taking two weeks to do something that would have normally taken you two weeks to do isn't really testimony to your dedication and work ethic. if i have work that will take me four hours to complete and after an hour i take a break to watch a movie, or get caught up watching dom play video games, or go into a trance watching the cats for two hours, then i go back to work and take three hours to complete what i was doing, i haven't worked harder or more efficiently when i got back to it. in fact, if, during the last three hours, i brought in extra people to help me, it would kind of imply that i was working less efficiently during that time.

also, i vaguely remember you saying something about no new mail being accepted at one point during the service stoppage. oh right- it was on the first day. i don't have a lot of experience running my own post office, but it seems to me that if people weren't allowed to send mail, then the source of this massive backlog is a wee bit of a mystery. oh wait- not everybody was prohibited from sending mail. just regular people. corporations were allowed to send out bills, for instance. and junk mail. so what you really mean is that you're taking care of the needs of large corporations, whose movement towards private couriers has been the cause of your declining revenues, before you start dealing with the needs of we mortals.

more to the point, you have actually been accepting mail since june 27th, which means that a lot of people have put mail in the system since then. and since you've been occupying yourselves sending out bills that probably aren't relevant any more and, of course "ad mail", i'd hazard a guess that now you have a significant backlog. i'll bet some of it is even kind of important to the people who were operating under the assumption that we'd had a functioning postal service for the last two and a half weeks.


personally, i'm forced to depend on the mail at the moment, because i've recently worked on a completely independent film, which we're trying to get submitted to festivals and considered for distribution. you know what completely independent means? it means we didn't have someone like the government handing us a large chunk of our operating budget. does that blow your collective mind? hard to believe that it could happen, but it did. so it's kind of a bummer to have to make decisions like whether or not we submit to a festival that could represent a great opportunity because doing so would mean that we'd have to cough up $100 for a courier. and it's kind of a bummer to know that copies we've sent out already are probably sitting in canada post depots right now, being excluded from consideration, because you're busy sending me notices from bell canada about how much i could save by coming back to them.

but i get it. that's a small, individual concern. and you're about the big picture. handling post for an entire country- particularly one the size of canada- is a big business. that's why we [the small individuals] pay you a big stipend every year, plus payment per piece of mail processed. because we believe it's a big deal to have a postal service that works. and since effectively stopping that service for a month [or more, when you consider that there were random stoppages in june before the "official" break off] is a really big deal, i'd like to know: what big gains were made by each side, what big improvements? oh... things are exactly the same as they ever were? gee, that's...well, you know. good luck with all that.

oh and fyi guys, in case you were worried, i did get that copy of the dvd in the mail. i went to my canada post office and paid cash to get that thing in the air. in fact, i was astonished at how cheap it was, a fraction of the $100 any courier wanted to charge me to get it to its destination overseas. then i noticed just as the employee was about to drop it in the mail pick-up box that she'd given it the postage it needed to ship within canada. but i caught her and after only a few minutes of watching her try to pull the incorrect stamp off the package and asking very carefully if she was sure i didn't need to fill out customs papers [she was sure], i paid the extra and off it went.