June 21, 2011
if i asked you, without resorting to google, to point to your amygdala, would you know what to do? chances are that you know details about relatively less important parts of your body [my right middle finger is really visibly crooked!], but these mysterious little almond-shaped and almond-sized clumps of neutrons lodged in the brain's medial temporal lobe, adjacent to the hippocampus, are crucial in determining your brain's supposedly irrational reactions. [fyi, they would actually be difficult to point to directly, if you were asked to do so...]

the amygdala plays a central role in emotional regulation, including very basic reactions like fear as well as the more complex process of emotional memory formation. this makes it a crucial component of responses to things like interactions with things and/ or people that are unfamiliar. late last year, a study emerged to show that the size of the amygdala might actually determine one's potential for social success. persons in possession of a goodly-sized set of almondillos apparently have richer, deeper and more complex social lives than those whose nuts are stunted. in fact, some theorise that the amygdalae are the brain's evolutionary response to more complex social networks, meaning that those with small almonds are not only lacking but lagging in an evolutionary sense. remember that the next time someone tries to sell you on the idea that they're solitary because the world isn't ready to understand them.


as might be expected, if these neuronic nutsacks are chiefly implicated in our ability to deal with larger modern social networks, those with abnormal amygdalae often exhibit mental disorders typical of those who have difficulty processing social information. bipolar patients, for instance, have been observed to have smaller amygdalae. differences in size from left to right also shows some correlation to certain disorders. children who exhibit signs of high stress or anxiety often have smaller left amygdalas. interestingly, schizophrenic adults have been shown to have right amygdalas that are significantly larger. patients with autism are theorised to have smaller than average amygdalae.

which is all interesting [well, it's interesting to me at least], but what does it mean for people at large? well, obviously it's always a good idea to have an understanding of what the physical cause is for anything that can go wrong with the body. in the case of mental disorders, pinpointing concrete physical causes is necessary not just because it will help cure or control them, but because, unfortunately, the whole spectrum is still dismissed by many as being the product of an overactive imagination. 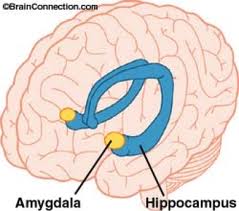 but one of the interesting things about the amygdala, though, is that, even if yours are smaller than average or lop-sided, they can be changed. and i'm not referring to implants here. studies have shown that under-performing amygdalae can be enlarged through the use of certain drugs. which means that we've progressed to the point of finding a potential cause for certain mental disorders as well as recognising that the cause can be managed. that's a pretty big step in the management of any condition, although it should be noted that the brain is a very, very difficult area of the body to diagnose even when the cause of it's problems are as clear as a hole in the head. but at the very least, one would hope that these sorts of discoveries, which are now starting to trickle into the public sphere [scientists have known about them for years, but a lot of the literature is pretty technical], will help further an understanding of the physical dimensions of mental illness.

alian said…
Really great post, Thank you for sharing This knowledge.Excellently written article, if only all bloggers offered the same level of content as you, the internet would be a much better place. Please keep it up!
lipoaspiração não invasiva
6:59 AM

morelikespace said…
Thanks very much Alian, I'm glad you enjoyed it.
6:48 PM