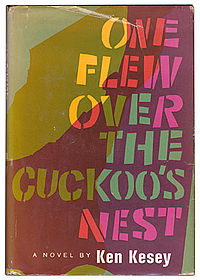 i was probably around twelve or so when i first saw "one flew over the cuckoo's nest". i know that i'd already developed a thing for jack nicholson and even at that age, i'd become completely fascinated with issues of mental illness and its treatment. one of the things that has always stuck with me from the film are those scenes with the mental hospital employees- not just louise fletcher's deservedly appreciated turn as nurse ratched, but those with the brutish orderlies assigned to impose the physical order that nurse ratched, the ward disciplinarian, insists on.

when i saw the film, i never explicitly thought about how true-to-life the characters were. i was aware that ken kesey, the author of the novel on which the film was based, had been inspired by his own work as a mental institution, but i don't think i ever believed that the story and characters were factual. after all, the point of writing a novel or creating a narrative film was that you could tell the story you felt lay scattered among the facts in your own way, rather than feeling bound to report incidents exactly as they occurred [assuming that people still sometimes feel bound to do that].

but, as many of you may already have seen from the bbc special report that aired this week, it seems like, if anything, the film may have been too kind.


the idea that this sort of truculent behaviour is still not only tolerated but apparently systemic is repulsive, of course, as are all reports of institutions who make common practice of abusing their wards, but to be dealing with this fifty years after kesey's book was first published and decades after such behaviour specifically brought the entire psychiatric profession into disrepute is particularly invidious.

after all, one of the reasons that people fear seeking medical care for mental disorders- whether for themselves or for a loved one- is because the images of zombified victims of drugs, electroshock therapy and lobotomies used as playthings by sadistic "professionals" are too pervasive in the collective memory. [to be clear, patients at winterbourne view were a mix of those with learning disabilities, autism spectrum disorders, brain injuries and mental disorders, so it was not exclusively a mental health institution. you can see details of the services offered at winterbourne view through the web site of their parent company castlebeck.] the revelation that decades of supposed scrutiny and improved knowledge seem to have effected no change whatsoever is not going to encourage anyone to seek help, nor is it going to foster the belief in patients or their families that such service providers have their best interests at heart.

the saddest part of this whole incident may be that, beyond that revelation- that such abuses were happening on a regular basis, at least at this particular institution and that repeated appeals to the authorities proved pointless- there is nothing to be learned. after all, the dangers of putting low-paid, virtually untrained workers in charge of difficult and unruly patients have been known for years. [you can see reporter joe casey and his producer discussing their work here, including the fact that casey was apparently given more training on his patient care job by the bbc as part of his undercover prep work than he was when he was taken on at winterbourne.]

the fact that the decision-making of health care providers is often driven by financial concerns and that, with private institutions, those financial concerns include making a profit, is a surprise to no one. and likewise, the fact that government bureaucrats become mired in process that they lose sight of rationality ['we didn't catch the abuse because it wasn't happening out in the open during our scheduled inspections...'] is so engrained in out minds that the term bureaucrat itself has become a term for someone who is close-minded and irrationally process-driven, incapable of independent thought.

i'd like to think- we'd all like to think- that the furor whipped up by the panorama piece would somehow lead to a restructuring of the health care system to ensure that this sort of thing never happens again. the government, at least, has said that it will start conducting unannounced inspections of such facilities, which is a good step. [whether that happens still remains to be seen.] but history teaches that media creates short memories; chances are that once the criminal charges against the arrested winterbourne employees are dealt with [and i believe we all sincerely hope that they'll get to spend any jail time in an institution where the employees exhibit a similar level of care for their wards], we'll all go back to sleep.

there are ways to prevent these sorts of systemic problems and, sadly, they're not as difficult nor as expensive to implement as one might think. but that's another story, for another week. for this week, i can just hope that the winterbourne story is enough of a jostle to get people to pay attention and, possibly, to think creatively about ways in which things could be made different. surely there aren't enough nurse ratcheds to keep all of the macmurphys down...

[you can read castleback's commentary on the bbc panorama report here.]