June 08, 2011
those who know me [and now, those who read this blog] know that i have a real thing for the dramatic shade known as either fuchsia or magenta. there are different definitions [and sub-definitions] of both, but for the purposes of the everyman, fuchsia is that point where intense pink and purple meet, shake hands and decide to be way cooler than everyone else. [sometimes literally- brown dwarf stars, the coolest stars in terms of temperature, emit an eerie fuchsia light.]
the origin of the name fuchsia, as with many shade names, comes from a family of plant. these plants bear flowers of the eponymous colour, which is about as unnatural-looking a thing as you're likely to see in anyone's garden. not surprisingly, there are few people who, when asked to name colours they associate with the natural world, will go with fuchsia. [in fact, when asked to name colours that remind them of anything, most people are not going to go with "fuchsia" as a first choice.]
fuchsia and magenta are generally more associated with the modern world, perhaps because magenta is one of the building blocks of both print and screen colours. if you've ever heard of cmyk values in colour reproduction, guess what that "m" stands for? magenta. [i think that there are a lot of teachers in design school who are happy that the powers that be went with "magenta" rather than "fuchsia" in this case.]
there are lots of ways to wear fuchsia, both in terms of clothing [i have a plethora of options] and cosmetically. there are shades for the eyes [mac has both "fuchsia" and "bright fuchsia" pigments, while indie company sugarpill has a shade called "dollipop" that, while i haven't tried it personally, looks like it could stop traffic], for the cheeks [aside from the fact that loose pigments can be used on the face, virtually every company has an intense fuchsia blush, my favourite being the mac "pro" colour azalea]. and of course, fuchsia colours abound for the lips, from every possible corner, in every
micro-shade between pink and purple [other than those shades who are sent to camp mauve]. and i can't even begin to count the number of options there are for fuchsia shades to put on your fingers and toes... however, since it's the season to look at bright, eye-catching [or even eye-gouging] shades for the lips, let's start with a look at those...

four fabulous fuchsias ::
guerlain :: shalimar
part of the newly launched "rouge automatique" collection, this is a cool, light shade that is an easy choice for day or night. the light texture and relative sheerness mean that it's a shade that can go pretty much anywhere.
mac :: rebel
this is an almost vampy magenta- very deep and equally purple and pink. the finish is close to matte for that extra oomph. not a shade for the shy, but definitely a different take on a dark, dramatic lip.
mac :: show orchid
this is definitely on the pink side of fuchsia and on the outspoken side as well, but there's a reason why this shade has such a loyal following with mac. it really is a stunning colour. although it's referred to as a "hot pink", it's ironically a very cool shade that doesn't pull red at all.
nars :: funny face
this is another opaque, more full-coverage shade, a perfect purple/ pink blend with a hint of red shimmer [hint is the key word- it's almost matte]. personally, i think this is a much nicer shade than their more attention-grabbing "schiap", which is a hot pink, but that's just my taste.
i'll also point to an excellent limited edition fuchsia shade that mac had out last year as part of their "liberty of london" designer collaboration- "petals and peacocks". this one leans very cool and, while it's a bright shade, is a little less likely to cause retina damage than show orchid.
here are a couple of fuchsia-themed looks for day or night [i'll let you choose which works best where, depending on your schedule] ::
"shalimar" 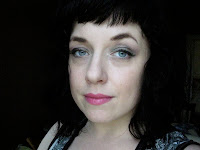 this is a very quick, ultra-simple combination for day time. it has a little bit of impact, but it's quite understated, really. if you want to be even quicker and simpler about it, you could skip the eye liner, but on me, i think that would look faded.
face ::
lush colour supplement "jackie oates"
diorskin nude concealer 001 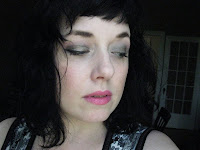 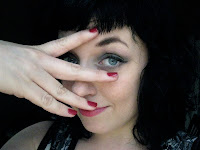 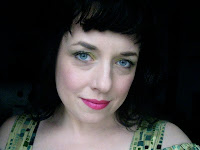 you might notice that i'm cheating a little bit here, or at least recycling. yes, this is the same photo set that i used when i featured show orchid as part of my "30 days of lips". i find this kind of look works very well for either day or night [if memory serves, this ended up serving for both], because it's bright and punchy, but also simple and bold enough to look "unfussy" by daylight.
face ::
nars sheer glow foundation "mont blanc"
mac prolongwear concealer "nw20"
eyes :: 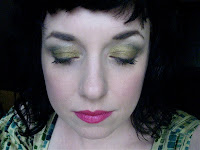 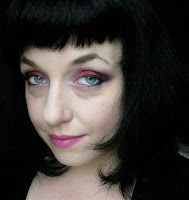 "bright fuchsia"
the lipstick in this look is limited, but i think you could easily substitute show orchid, funny face or rebel. on the other hand, you still see some of these kicking around on ebay and it is a beautiful shade. i really wanted to do something a little dramatic for nighttime using some loose pigments. although there's a little skill that needs to be employed using pigments, they're unparalleled for getting intense colours [particularly if used wet and/ or with a base]. i'm a complete klutz and if i can learn, anyone can.
face ::
nars sheer glow foundation "mont blanc" 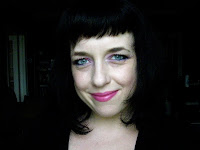 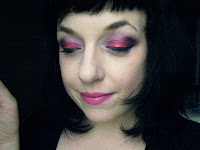 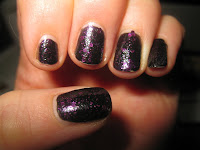 D.Sadie (D.G.S.Beauty) said…
Wow, I love all the colors! Rebel is my favorite. =D I found your link on specktra. Great blog. New follower. It'd be great if we could follow each other.

morelikespace said…
I feel like Rebel is one of those colours in Mac's arsenal that too often gets overlooked.
10:28 PM