five reasons the world is happy i don't have kids

i'm consistently surprised that people keep asking me if/ when i'm planning on having children. me planning to have children strikes me as an idea equivalent to planting explosives around a nuclear power plant to see what happens. here's why:


1. i'm incredibly self-centred. have you read this blog? i talk about virtually nothing but myself and there's a reason for that. with a very few exceptions, i don't really even think of other people as human. not a great start as far as maternal instincts go. 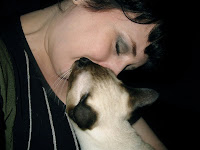 2. the cats really dictate most things in my life. anyone seeking refuge from nightmares in the middle of the night will have to negotiate with them for space on the bed. they get to kiss me as often as they like, which means that the immune systems of anyone who comes near me had better be state of the art. no excuses for being young and developing.

3. i'm really forgetful. i mean, i really loved my iphone 3gs and used it constantly. i couldn't shut up about how much i loved the phone. but i had a few drinks with dom and nat one night and dropped it in the back of a cab, thinking i was putting it back in my purse. and that's what i do when things that are useful to me. imagine where i'd leave a kid.

4. i already let the cats drink, because i think it's hilarious. and i can't even get the cats drunk. can you imagine the kind of things i'd get up to if i were given a small human with no natural tolerance for alcohol? i can. i imagine it often. and that's not a good thing for anybody.


5. i have really bad insomnia. that might work out fine in the first few months when the baby and i could scream at each other at all hours of the night, quickly driving dom into either voluntary deafness or insanity, but i think that it might get problematic when mummy thinks it would be awesome to watch movies at two in the morning on a school night.


there are lots more reasons, but i think that this is really a solid base for my argument that i should never, ever be encouraged to propagate. now go about your day and be happy that you will never have to deal with my drug-addled, cat saliva-coated, sleep-deprived spawn.

Martin Rouge said…
Darling, I have stopped trying to justify why I don't want kids a long time ago, especially since that the one comment that keeps coming back is "oh, you'll change when you get them." Oh hell no I wont change, because I'm a selfish bastard that can barely take care of myself and I will not put myself in a position where I have to deal with a brood. I don't deal with other people's offsprings because they piss me right he hell off, why would I jump at the opportunity to get my very own bag of diarrhea and wasted college funds. Never, ever, ever.
1:51 PM

morelikespace said…
In this case, it's not so much justifying as reminding people that there are folks who just have no business having kids- and that there is something noble about realising you're one of those people.

I don't ask for much by way of recognition. A parade and a large cheque should suffice.
10:57 PM