May 27, 2011
it's funny how you occasionally need other people to tell you to try out a place that you walk by every day. it's not like dom and i weren't aware that la taverne was there- i'd even eaten there about a hundred years ago, but i didn't remember the food because, let's say that the company made the experience unpleasant enough that everything else faded like a polaroid left in the sun. [do people still get what that means?]

however, when someone teases you with the phrase "best calamari in the city", it's the sort of thing that makes you pay attention. i've been excited for calamari since i first sampled them grilled on a bunsen burner in the aftermath of a grade eight science class dissection. at that point, they still qualified as "exotic" at least in halifax, but now, of course, they're ubiquitous and every restaurant serving pub food, mediterranean-influenced food and many other styles as well needs to have them on the menu.

the last time i went to la taverne, it was generally known as a steakhouse for montreal anglophones who either didn't want to venture all the way into downtown or who didn't want to fork over the prices commanded by the city's best-known steak joints. since then, they've received a makeover that includes a refurbished, sleeker and more modern interior and a menu that favours italian and southern french fare. the offerings look simple, not particularly adventurous, but well thought out. ultimately, though, we're here for the cephalopods.

i'm a little uneasy as we're waiting for a table. first off, there isn't any reason we should be waiting for a table, because there are several tables available and clean despite it being supper time. all we need is someone to grab a couple of menus and point. instead, we wait five minutes while three servers bus a table in front of us. don't get me wrong, the wait doesn't bother me- we didn't have anywhere we had to be or anything- but there is something grossly inefficient about watching three people do a job that would constitute a quick task for any one of them and it seems weird that this production number takes place in full view of people [ourselves and another prospective table] of people who are waiting to be served. 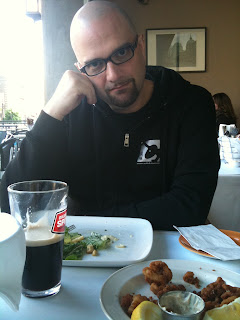 once we do get seated, the service gets better. we're not particularly in the mood for a big meal- we only want to try the calamari, really- but we go for salads and drinks as well. the calamari come in fried and grilled form. i'm tempted to ask for a platter of each, but we eventually decide to opt for the fried, plus a salad each to round things out. i go for the standard house salad and dom gets a caesar. add to that a pint of guinness [dom] and a glass of pinot noir [me] and you have a nice, light early summer evening meal.

although technically, these three dishes are all appetizers, the portions are large enough that they serve as a meal. seeing as there's little difference in price between the pricier appetizers and some of the less expensive entrées, it seems like some crossover is expected.

my salad is tasty, although exceptionally simple. it's a lot of romaine lettuce with sunflower seeds, dried cranberries and mandarin slices tossed in a slightly sweetened, tangy vinaigrette, but it works. dom's caesar is better. the presentation is very rustic- romaine leaves overlaid with rough slices of parmesan, richly but not overly dressed. they get bonus points for having a proper homemade dressing. they get demerits for having apparently forgotten that anchovies are a key ingredient in the caesar salad and/ or its dressing. dom and i differ on the place of capers in a caesar- to me, they're superfluous, but to him, they're part of the essential caesarian experience [you did not read that, move along]- but it should be noted that they're not present either. so the verdict on the salads is mixed. both have their good points, but aren't really well-thought out enough to make a great impression. and yes, you absolutely can make friends with salad, it's just that no one really tries.

as for the calamari, they are a paradox. i'm impressed by the fact that they are absolutely perfectly cooked. i've had enough calamari to realise that about 80% of the time, it's cooked improperly- usually too much although occasionally too little- so i value when a cook knows what they're doing enough to get the balance right. however, i only discover this pleasant surprise having finally decided to start liberating the calamari from their massive crusts. i know that we could have opted for grilled if we wanted something lighter, but these are so heavily battered that they have changed from rings to disks. the batter is even quite tasty, but there's just so damn much of it. they come with a roasted garlic aioli, which is tasty, but doesn't strike me as something difficult to whip up at home. the biggest problem with the combination of heavily flavoured elements is that calamari actually have a very delicate flavour, so in the final dish they're lost, providing little except texture.

there were a couple of unfortunate "extras" that made the experience go from "not bad" to "not bad":

first, the staff were really, really eager to get rid of us. well, that's a little harsh, but it seemed like they were way too eager to take away our plates and glasses while we were still eating. i like quick service, but pulling my plate, complete with the cutlery i'm still using for the shared calamari plate out from under my nose without even asking if i'm finished is off-putting.

second, well, i'd like to direct your attention to exhibit b. that's not my lipstick. that's dom's water glass and that's how it arrived [it's not his lipstick either]. obviously, i get that lipstick happens. and dom gets it, having been faced with the difficulties of washing mine off our own glasses on many occasions. if this happened at a friend's house [and it has], i'd laugh it off. however, this isn't someone's home kitchen. this is a restaurant and a restaurant with obvious chi-chi ambitions and that is some stranger's lip crud on a glass.

it's hard to live up to any billing of "best in the city", but i was still expecting more. the food at la taverne is pleasant and has potential, but for the prices they're charging [$72 including taxes and tip for what i've described above], they need to do a lot better than inconsistent service, dirty dishes and half-hearted cuisine. dom actually described the experience best: "cala-meh-ri"

Martin Rouge said…
There are two comments I would like to make, as you know I know what I'm talking about: first, and this is coming from a food nerd, anchovies and capers are not essential components, but croutons are. Properly handled they could be enhancing the dish, but they are not necessary. (And neither are bacon bits; as a side note, anchovies are absolutely essential to a proper nicoise, but I have been to no place yet that did make a good one, or even offered it. Oh well.) Second, that glass should have been returned on the spot, as this is as unacceptable as stained flatware. When you have a plongeur who does a proper job and they have a properly functioning dishwasher, there are no such stains on glasses, its just not possible.

Given the price tab for the outcome, I'll stay well away; this is the sort of experience I'd expect out of Toronto...
2:52 AM

morelikespace said…
You're 100% right about the glass (and the dressing, although I have to say I always include the anchovies in mine even if it's not perfectly traditional). We should have mentioned it earlier, although when we did, I can't say that it seemed to come as a surprise to the waitress ("oh yeah, sorry about that"), which makes me feel a little queasy about what we might not have seen on the dishes...
3:02 AM