not everybody loves a winner

May 09, 2011
i have to say, it felt fairly surreal last monday watching seat after seat in quebec get swept up in the orange tide. the rise wasn't as out-of -the-blue as some think; in the last federal election, the ndp finished a solid second, or at least made a decent showing, in a number of seats on the island of montreal. with the failure of michael ignatieff to capture the hearts or minds of quebeckers, there had to be some in the party who knew that there were a number of seats, either traditionally held by liberals [e.g., ndg-lachine] or where there was a solid liberal vote [e.g., jeanne le ber] that had large demographics with whom the ndp's message has traditionally resonated. that said, the absolute implosion of the bloc quebecois, predicted when lucien bouchard left the party to become quebec's premier, caught everyone by surprise. which is why, in a number of ridings thought to be bq strongholds, the ndp chose to field candidates more in the interests of having a name on the ballot than because they believed they had a serious shot at winning. things can sneak up on you that way.

in point of fact, virtually every time a part makes substantial gains in the course of one election, this happens. a lot of progressive conservative candidates in the 1984 general election, particularly those in quebec, proved that they were well short of ready to take hold of the reins of power. of course, the difference in this case is that the ndp aren't taking the reins of power. they'll be providing her majesty's loyal opposition for the next 4-5 years. however, there will also be a large onus on them to justify quebec's love, which means that their work on parliamentary committees and their interaction with members of their ridings will be crucial. don't forget, on the provincial landscape, quebeckers reacted to an unpopular leader by turfing out the parti-quebecois in large numbers and handing over the official opposition to upstarts action democratique de quebec. in the following election, the adq was obliterated and the pq now seems poised to regain power the next time we go to the polls. [could we please have a bloody moratorium on elections for a while, though? i moved back to quebec two and a half years ago and have voted four times. i'm done. i need a break. try governing for a while and get back to me in a couple of years' time.]

getting back to the subject at hand [yes, there is one], it's true that the ndp now have a caucus that includes a unilingual anglophone in rural quebec who lives three hours away [who's also a single mom and active in animal causes, helping find foster homes and shelters] and a 19 year old student from mcgill. this has the potential to go horribly, horribly awry. on the other hand, you could argue that the people who are there not exactly candidates for sainthood and having a diversity of ages, genders, economic backgrounds and cultural backgrounds would actually make parliament, well, representative.

the problem for jack layton is that no one is saying that, or at least if they are saying it, they're not being heard by the country's english print media. immediately prior to the election, montreal newspaper la presse showed riding-by-riding polls that indicated that the ndp stood to make major gainsin virtually every part of quebec. nationally, however, the globe and mail stuck their nose up at the prevailing wins and confidently predicted that the ndp would make, at best, modest gains. their predictions for the province were correct in only about a quarter of cases, mostly bolstered by the fact that they were correct in guessing seats won by the liberals, bq and conservatives. i'll repeat: information on the groundswell of ndp support was widely available in the days coming up to the election, but the newspaper that claims to represent the nation chose to underestimate it in almost every case. not to beleaguer the point, but here are a few instances [keep in mind that stephen harper became prime minister with less than 40% of the popular vote, which is not abnormal] ::

hull- aylmer
globe prediction :: strong liberal riding
result :: ndp win with 59.2% of the vote, compared to 20.3% for the liberals

these are just a few examples. in fact, the globe was wildly wrong in their predictions for the ndp everywhere outside of a few ridings that haven't voted any other way in my lifetime. and that's not just in quebec, although, of course, it's most obvious in quebec given the numbers involved.

and you could even laugh it off as being the usual sort of media stupidity and joke about the uselessness of polls, if the globe could simply claim that the information was unavailable. but the information was available. la presse had it. global news had it. the globe and mail haven't deigned to explain how they got it so wrong with the facts at their disposal. they have explained other errors in their predictions, but as far as underestimating the ndp, there is a mysterious silence. if these were people and not organisations involved, one might say that grossly underestimating someone's potential was a sign that you were prejudiced against them to begin with. and i'd argue that there's no reason to think that different rules apply in this case. the globe didn't predict the ndp's victories because they didn't want them to happen and chose instead to cling to the hope that the old parties and the status quo [even involving the separatist bq] would somehow prevail.

nor is this attitude limited to the globe and mail. jack layton, at a press conference the day after the election, had to answer questions far harsher than any directed at the prime minister as to how he was going to cope with having young people in his caucus. the montreal gazette ran a stream of articles on the disastrous choices made by voters by voting for the ndp, culminating in a hysterical editorial about how the ndp's electoral victories pointed to serious flaws in the canadian democratic process. their logic was that the ndp would just throw anyone into elections for the sake of having a name on the ballot [and in some cases, that's probably true], whereas the established parties, the liberals and the conservatives had careful vetting processes in place that would ensure that their candidates would be of high caliber. i'm serious. they said that.

those of us who've seen a few elections know that that vetting process hasn't been 100% effective. after all, the conservatives and liberals have let in a few people who you probably wouldn't want to add to your facebook friends. conservative mp rahim jaffer once got an aide to impersonate him for a radio interview because he was busy, was named "canada's laziest member of parliament" and since his electoral defeat in 2008, has distinguished himself by getting caught doing 93km/hr in a 50 zone while drunk, with $500 worth of cocaine on his person after returning from a meeting with a banker for the hell's angels. stephen harper made him chair of the conservative caucus. liberal alfonso gagliano occupied several key positions in cabinet from 1996-2003 and was later appointed ambassador to denmark, until the gomery commission pointed the finger at him being the highest-ranking official responsible for the sponsorship scandal relating to a long-running program that saw misappropriation of public funds in the millions of dollars. [gagliano has since sued former liberal prime minister paul martin, who fired him and banned him from the liberal party for life, for defamation of character.] former saskatchewan cabinet minister colin thatcher, who was first elected as a liberal but quickly switched to the conservatives, was convicted of murdering his former wife.

those are examples of what a careful vetting process gets you. but the montreal gazette wants you to know that it's the ndp selection process that's flawed. 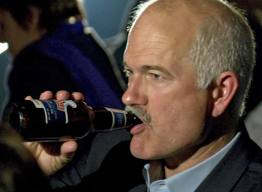 parties with a large number of new mp's always face a struggle. the consequences of making mistakes can be considerable. but most of the time, unless someone really steps out of line, those stories are reported offhandedly and then forgotten. the challenge that jack layton and the ndp face is that they have a very powerful group with a very large public bullhorn who already want them to fail. it's like finding out the person giving you your driver's test is the guy who walked in on you making out with his daughter.

mr. layton, mr. mulcair et al, i wish you good luck. i've a strong suspicion that you're going to need it.