making faces :: my date with guerlain 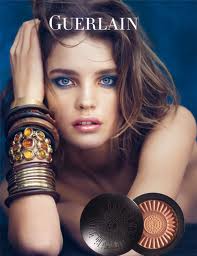 there's something about even saying the name guerlain that just seems elegant. and indeed, there is something about virtually everything released from the venerable perfume house [originally founded in 1828 and currently owned by luxury brand powerhouse conglomerate lvmh] that does seem to radiate an elegant, refined and delightfully [not off-putting] snooty air. they are a luxury brand among luxury brands and virtually everything that emanates from them whispers class, refinement and beauty. so when i found out that my local guerlain counter was inviting women to come for a makeover to celebrate the launch of their summer 2011 collection and their new rouge automatique lipstick line, i was quick with a positive response.

now, regular readers of this blog will note that i've already indulged in both of these collections. i picked up two rouge automatiques the week they were released and i treated myself to the stunning terra inca sublime radiance powder from the summer collection. but the fact that i'd already seen some of the goods didn't make the prospect of having one of their makeup artists use me as a canvas any less exciting.

guerlain is one of those brands that just consistently seems to get things right. i came to their cosmetics by way of their perfumes [as i assume many do], since i'm a long-time devotee of their mitsouko perfume [incomparable in every way] and dom swears by their vetiver for men. i'm pretty certain that fans of guerlain fragrance are lured into their cosmetics through one of two avenues :: 1. their "terracotta" line of bronzers which are apparently the be-all, end-all of bronzing for those who are into that sort of thing; or 2. their remarkable powdered eye kohl with its perfectly precise wand applicator and remarkable formula that seems able to resist even the dampest and most smudge-prone of water lines [mine].


once you've gone down one of those roads, it's easy to be drawn in by guerlain's combination of quality and beauty. one of the reasons that i love getting something from guerlain is because they take such care to design their products [critics, particularly of their "rouge g" lipsticks, say over-engineer] so that they consistently feel like luxuries, like you really are getting something quite special. don't discount that feeling.

the artist [and i'll have to apologise that i didn't get her name, so i can't credit her] asked if there was a look i wanted to try in particular, but to me, the excitement is always in seeing what they'll come up with, without the prejudice of knowing what i usually do. my only request was that she not use either of the two lipsticks that i'd already purchased. i was a little nervous that i left the door open to bronzers, because i'm normally not a fan, but i'd told myself that i wasn't going to set any limits aside from not wanting a repeat.

interestingly, though, the makeup artist didn't once reach for any bronzer. she did use the terra inca powder, which gets no objection from me, but she could obviously see that i am one pasty girl and that it was better to stick with lighter colours.

i have to say that one of the things that i really liked were the "brightening" products she used- essentially designed for the face or around the eyes to give a healthy, natural glow. they really add something to the complexion, an effect that lasted several hours. it's tricky to capture in photos, but i looked radiant [without looking shiny, which is unfortunately what "radiant" means much of the time in cosmetics] throughout the day.

i liked the light consistency of the lingerie de peau foundation that she used- it gave nice, even coverage, but it felt like nothing on my skin. the problem i have with guerlain foundations [and i've tried a few] is that they simply don't come light enough for my skin tone. this one was a fairly good match, but i find that, if you look at the difference in skin colour between my face and my neck/ shoulders, even in full sun, you can still see that there's a bit of a difference. [apparently, there are lighter shades available at their boutiques in the orient, but that doesn't help me a whole lot, since even if i could convince someone to get them for me, i'd have no way of telling which shades would work.] it's too bad, because, as i said, the formula is lovely.

for my eyes, she created a very soft, smoky look using shades from the summer "terre indigo" eye shadow palette. she used mostly the darker, cooler brown and the blue, which gave a really nice lift to my eyes. since it was a bright, sunny day, she kept the effect understated. she did combine these colours with a couple of lighter permanent shades [one from the "rue de franc-bourgeois" palette and the "instant charnel" single shadow]. she used shadows to line as well [the dark brown shade from the "terre indigo" palette], which was a nice complement, since it made the outline a little softer than a black liner would have.

for the lips, she used a combination of rouge g #71 "rose désir", which was actually a limited edition colour from their spring collection [still available through sephora on line in canada and the united states] and "salsa" gloss from the summer 2011 collection. all three of the summer glosses look fiercely bright in the tube, but they're actually quite sheer when applied. the end effect of the soft pink lipstick and the gloss was very much a "my lips but better" shade with a lot of shine.

the only slight disappointment was with the mascara. guerlain aren't known for their mascaras and i can now see why that might be. i found the application on this one to be a bit clumpy, adding neither depth nor definition. i forgot to ask, but i think this may have been a "curling" formula, in which case it seemed to work, but my lashes already curl fairly well on their own, so the effect was more of a "kink".


in the end, i couldn't resist the adorable "terre indigo" palette, with its mosaic of warm medium and cool dark brown, burnt orange and persian blue. true to guerlain's established form, it's beautiful to look at and, if my makeover were not enough, it comes with a lovely little insert that gives suggestions on how the colours can be used together. [i should add that while the effect in the "look" photos is more muted, the pigmentation is actually very good. see swatch photo. only the blue seemed a little powdery, but it can easily be built up.] i can't wait to start playing with it myself.

many thanks to veronik at the holt renfrew guerlain counter for hooking me up and thanks to dom for the "after" shots of my makeover.

Unknown said…
You look fabulous!! Man I really need to make the drive and have a makeover done somewhere one day! Sounds like fun ;-)
1:26 PM